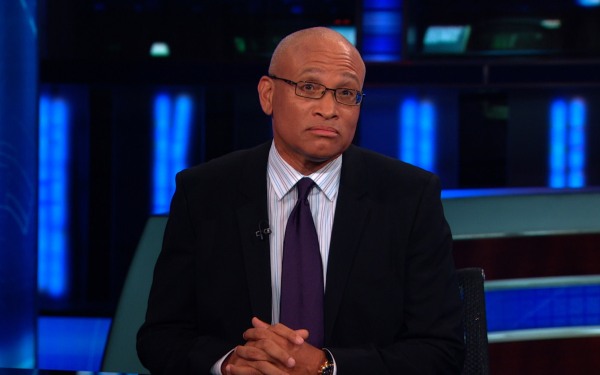 For an entertainer about to settle into one of the hottest seats in late night, Larry Wilmore is feeling pretty chill.

“There’s snow on the ground — this is getting real!” said Wilmore by phone from his New York offices of “The Nightly Show With Larry Wilmore.” “I don’t know if this California kid can handle it.”

His Comedy Central series will occupy the 11:30 weeknight slot, recently vacated by “The Colbert Report.” The series is slated to launch Jan. 19.

Of course, Wilmore — who has relocated to New York, though his wife and kids are remaining in sunny California — is kidding. The 53-year-old is handling the climate change just fine and is so thrilled about the opportunity that even bad weather is not getting him down.

Wilmore is no stranger to comedy. He worked as a writer and producer on “In Living Color” and was the creator of “The Bernie Mac Show.” Most know him these days for his stint as “The Daily Show With Jon Stewart’s” “senior black correspondent,” a position he has held since 2006.

If he’s feeling jittery about succeeding Colbert and diving into the crowded arena of late night to face off against Jimmy, Jimmy, David and Conan, it was not evident late last month. “Yes, I’m in the eye of the hurricane,” he said. “But I’m having the time of my life right now.”

Created by Stewart, “The Nightly Show” will wade into the pop culture waters with roughly the same kind of structure and format as “The Daily Show” and “The Colbert Report.” He will be accompanied by a diverse panel of personalities.

“It will be my take on the world from my deconstructive point of view,” Wilmore said. “We’ll be weighing in on the issues of the day. It will be a nice mix of scripted and unscripted. The focus will be on what makes us laugh.

“One of the themes of the show will be to take the point of view of the underdog, and to put that in perspective, whether it’s about race, gender, politics or whatever issues are out there.”

And he won’t be as straightforward as he was as “the black correspondent.” “I will be a lot looser,” he said. “It’s very important for me to be authentic in this role. We really want to be authentic with the audience.”

Wilmore also feels that given the raw climate in the country and controversies such as alleged police misconduct and simmering conflicts between conservatives and liberals, he will have plenty of material.

“For a lot of people, it will be timely that this show is coming on now,” Wilmore said. “There’s a lot of permission to go certain places when you’re talking about your people, your culture. But the other side is also powerful: I can talk about torture or the budget or anything else. In that way, I can just be one of the boys.”

“I know we have some big shoes to fill,” she said. “What Stephen did was nothing short of remarkable. I’d be lying if I said I wasn’t nervous. This is the next important franchise for Comedy Central. But I feel so good about the concept. There is a need for the kinds of voices that haven’t been heard in late night, and I know this concept is something that people are really looking forward to.”

Having the hugely popular “The Daily Show” as a lead-in will be a plus for Wilmore. It certainly helped Colbert, who will take over for David Letterman, who is leaving his late-night perch on CBS in May.

For Wilmore, “The Nightly News” comes on the heels of another career triumph. He’s also worked as an executive producer on “black-ish,” the ABC freshman comedy about a black family grappling with their cultural identity in the suburbs. The series, which stars Anthony Anderson and Tracee Ellis Ross and was created by Kenya Barris, is one of the new season’s most popular shows.

“I’m really happy for ‘black-ish,’” said Wilmore. “I’m so happy for the cast, for Kenya. But I’m finished with the show. I’ll be rooting for it from afar.”