Elvis at 80: It could have been a Wonderful Life 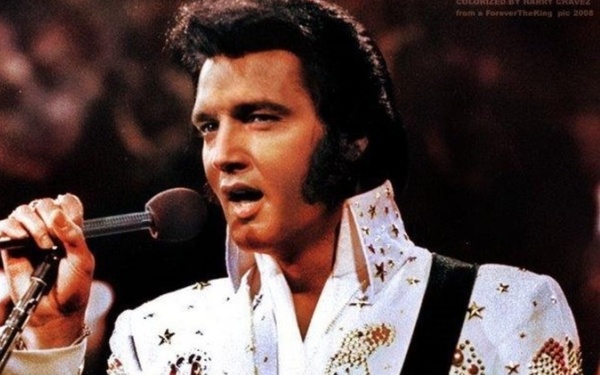 What if Elvis Presley had lived?

In August 1977, the singer was found unconscious in his Graceland home and later pronounced dead at age 42. But what if the King of Rock ‘n’ Roll had in fact been saved by paramedics and had continued his musical career? If so, we would be marking his 80th birthday in a very different way. And we would be pondering four more decades of Presley’s work and life, a life that might have looked like this ...

August 1977. After recovering from his near-death experience, Elvis proclaims that he promised to live a saintly life if he was spared. He enters drug rehab and emerges lean, sleek and ready to rock. Only he is talking Rock of Ages, vowing to record only gospel and appearing solely on shows on the Christian Broadcasting Network. Pat Robertson says Elvis has been “all shook up by Jesus.” Elvis severs ties with Tom Parker, turning his career over to his ex-wife Priscilla. There are tensions — his spiritualism versus her Scientology — but she proves a savvy manager.

1977-81. Aside from his Christian work, Elvis performs little, living quietly in Graceland. But, an admirer of Ronald Reagan, he gives a show-stopping performance of his hits at the Reagan inaugural, realizes how much he misses his old songs and follows it up with his first world tour. He is shocked when European audiences respond poorly to his music, even after Elvis markets himself as “TOP: The Original Punk.” But they love him in Japan.

Mid-1980s. Tired of the old songs (and disappointed by the sales of re-recordings of his greatest hits via late night TV), Elvis casts about for a new producer and sound. He toys with hip-hop, guesting on a single produced by Afrika Bambaataa. It is unsuccessful. A tour with Chuck Berry and Jerry Lee Lewis as “Monsters of Rock ‘n’ Roll” collapses when the three performers fight constantly over who should close the show.

1987. Elvis is inducted into the Rock and Roll Hall of Fame. He gives a touching and heartfelt speech about his impoverished youth, the craziness and confusion of being the first global rock star, losing his way in ego and drugs, and finding his way back with the help of his Lord and Savior. He receives a lengthy standing ovation, and Elvis, Scotty Moore and James Burton have a long three-man bear hug. The stage during the night-ending jam session is so packed with artists wanting to plug in and play behind Elvis, it blows fuses at The Waldorf Astoria. “That’s rock and roll!” Elvis yells from the suddenly darkened stage, drawing cheers.

1991. Now 55, Elvis sees other veteran artists such as bluesman John Lee Hooker and singer/guitarist Bonnie Raitt (whose singing voice he professes to love) have platinum success and decides he wants in. He hooks up with producer Mutt Lange, who gives Presley a big contemporary arena rock sound and loads the album with guests, including a hit rocking version of Don’t Go Breaking My Heart with Shania Twain that wins a Grammy.

The album debuts at No. 1 but underperforms. The lengthy arena tour starts out well, with corporate backing from Skippy peanut butter and Chiquita bananas, for which Elvis does a series of self-deprecating commercials. But after injuring his back during an on-the-road karate exhibition, his old prescription drug habits begin anew and a few of the old Memphis Mafia members appear on the tour bus. Priscilla cancels the last few dates to get him back to rehab.

1993. Elvis follows in the footsteps of Frank Sinatra and records a duets album featuring songs from his back catalog. Elvis and Paul McCartney’s lightly funky version of That’s All Right, Mama rules AAA radio for six weeks; His Eye Is on the Sparrow with former backup singer Cissy Houston (and, it’s believed, a little help from Whitney) earns them both a Dove Award.

1994. On May 26, Lisa Marie Presley quietly marries Michael Jackson in the Dominican Republic. On May 30, Elvis has a minor stroke. He quickly recovers and swears publicly the two incidents were unrelated. Still, confused fans spread rumors that Elvis is dating Janet Jackson.

1995. In a Rolling Stone interview, a fully recovered Elvis declares he hates grunge. He opines that he just can’t figure out why all these dirty looking, miserable whippersnappers are complaining all the time when they have the best job in the world. He does kind of like Nirvana’s Lithium. “I had some great times on Lithium,” he chuckles.

Also, after seeing the Red Hot Chili Peppers perform while appearing on Late Show with David Letterman he declares, “Them L.A. boys are some crazy fellas.” Because of the interview, Elvis is initially booed in Cleveland Stadium when he makes a surprise appearance at the Rock and Roll Hall of Fame concert; he wins people over with his version of Bob Marley’s One Love.

1996. Elvis watches his Million Dollar Quartet buddy Johnny Cash’s career be rejuvenated by the American Recordings series and wants in. He and uber-hot producer Rick Rubin team up and produce The King Wears No Clothes, a stripped down, back-to-basics rock recording backed by a mix of old friends and a gaggle of relative youngsters including The Mavericks, Matchbox 20, three-fifths of Guns ‘N Roses, U2 and the recently re-formed Eagles.

Critics and fans exult over the album featuring songs written for the project by Bono, Bruce Springsteen, Lyle Lovett and R.E.M. It sweeps the big awards at the Grammys. The cover photo — a svelte, 61-year-old Elvis in a Vegas-era jumpsuit unzipped halfway to show his surprisingly toned chest — becomes iconic. Elvis closes out the century with two more Rubin-produced albums and a huge New Year’s Eve show in Vegas shown on pay-per-view. People magazine calls him the Sexiest Man Still Alive.

2002. Elvis and daughter Lisa Marie record an album, The King & The Princess, produced by Rick Rubin that is well received and sells briskly. They don’t tour but make the talk-show rounds telling stories and generally being a cute daddy-daughter team. Elvis admits on the Today show he finds Lisa Marie’s then-new husband Nicolas Cage’s obsession with him to be a bit “unsettling, but otherwise he seems to be an all right guy.” After the couple divorce, Elvis admits “that guy was pretty weird.” Cage replies: “Pot. Kettle.”

2005. Elvis, still touring but clearly winding down, quietly celebrates his 70th birthday with friends and family. Fans swarm Graceland and sing Happy Birthday to him. He briefly sticks his head out of one of the upstairs windows and waves.

2009. Following the death of Michael Jackson, Elvis releases a tribute collection of Jackson tunes. His cover of Bad — which mingles bits of his own Trouble — becomes the most downloaded song of the year. A will.i.am remix will be heard in commercials for years.

2010-present. Looking for different ways to reach old and new fans, Elvis begins a blitz of TV appearances. Teamed with Cheryl Burke, he wins Dancing With the Stars — although critics question the season having an “all Elvis music” night. He is a guest judge on American Idol. He appears in an Adam Sandler movie; it flops, but Elvis’s scene gets millions of YouTube views. He guests in a multi-episode Nashville arc asking if Elvis is Deacon’s father. (He’s not.)

Jan. 8, 2015. Elvis’s 80th birthday is celebrated at a live concert special from Las Vegas. Bruce Springsteen, Jennifer Lopez, Usher and other celebrities sing Elvis songs for a global audience. Elvis looks a bit frail after recent hip replacements (Jimmy Kimmel jokes, “He shakes, rattles and clanks”). Sitting in a special box with Priscilla, Lisa Marie and his grandchildren, Elvis rises at show’s end to declare, as he so often did, “Thank you. Thank you very much.”