Tracking down the real sites used in "Portlandia" 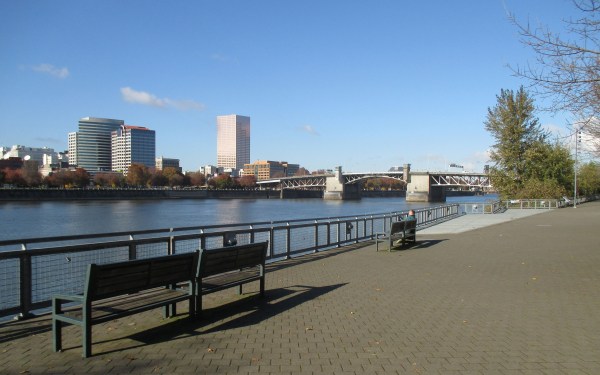 The view of Downtown Portland the Morrison Bridge from the opening credits in the background.
(Credit: Rob Owen/Pittsburgh Post-Gazette/TNS)

PORTLAND, Ore. — In its first season IFC’s “Portlandia” coined the phrase “Put a Bird on It.” In October, series stars Carrie Brownstein and Fred Armisen filmed a scene for the fifth season inside a Portland art supply store. Unbeknownst to them, seven posters featuring birds hung from the ceiling above them out of camera range, proving that for a certain segment of consumers, bird-adornment really is a thing.

And while “Portlandia” pokes fun at both mainstream pop culture and counterculture — the art store sketch spoofs ideas of radical art in an art store that offers prefabricated artistic elements — its sketches have been widely embraced by fans of satire, whether they’re hipster haters or hipster wannabes.

“Portlandia” films all over Portland in late summer and early fall, and the show’s stars say they generally receive a warm welcome.

“People are just nice to us across the board,” Armisen said between scenes in mid-October.

“We really shoot under the auspices of many business and homeowners. So it tends to be people who are excited about the show and excited to have their place or business or home or art on the show,” Brownstein said. “It’s people who have a curiosity and are very generous with their time and space.”

“Portlandia” has returned to IFC for its fifth season (10 p.m., Thursdays), so the timing is right to stroll through “Portlandia’s” Portland.

The firm found 27 percent of those surveyed like the show while 18 percent do not; 55 percent have no opinion, which helps explain the most frequent refrain heard during a day spent checking out “Portlandia” shooting locations: “I don’t watch TV,” a pretty ”Portlandia” response.

On Portland’s East Side, the heart of the city’s cool culture, shops and restaurants line North Mississippi Avenue, and several of these businesses have been featured on ”Portlandia” or seem as if they may have inspired the show.

Land Gallery is where the “Put a Bird on It” sketch was filmed, and one of the fake birds from the shoot stayed behind and remains perched on a wall thermostat. Store manager Amber Castaldo said Land did have “a lot of bird stuff” prior to the “Portlandia” sketch, including note cards by artist Nikki McClure, who is fond of putting birds in her work.

Castaldo said she “doesn’t watch TV in general,” but she has watched “Portlandia” and thinks the show’s creators accurately depict segments of Portland culture, but those segments aren’t as prominent in real life as the sketches might suggest.

“They were wonderful people to work with,” she said of the “Portlandia” crew. “It was pretty rad.”

Land stocks several “Portlandia” books, and there are still items adorned with birds for sale, including laser-etched wood ornaments that sold for $22 in November.

Down the block at Sunlan Lighting — slogan: “Sunlan sells lightbulbs” and not much else — Dennis Newell said his mother-and-son-owned shop hasn’t been featured on ”Portlandia,” but the show’s crew did buy light bulbs there for a first-season sketch about making artisanal light bulbs.

“I’ve never seen it, but probably we’re the inspiration,” Newell said. “I haven’t had cable in forever.”

His mother and co-owner, Kay Newell, agreed on both counts.

“It could have been us because I have got a dorky reputation,” she said. “I’ve never seen the show, but I don’t have cable.”

Newell said Armisen visited the store this past summer, but his mom didn’t recognize the “Portlandia” star.

“Of all the people in show business, I can identify by face only half a dozen,” Newell said. ”Maybe I’ll get cable.”

Up North Mississippi Avenue at the unusual Paxton Gate gift shop, co-owners Andy and Susan Brown said their shop has been on “Portlandia” twice, including for an episode in the upcoming fifth season where it plays, appropriately, a taxidermy shop. Paxton is “like shopping at a history museum where everything is for sale,” Brown said of the store, which sells mounted baby skunks starting at $625.

In season two, Jeff Goldblum guest starred in a sketch set at a Knot Store. Paxton Gate was made over into a store that sells rope knots, and the Browns got to keep a few framed knots and a half-consumed bottle of water Goldblum left behind. The knots (and the water) now hang in a place of reverence in the store’s bathroom.

Brown said Armisen visits the store on occasion, including a September trip when he brought Jerry Seinfeld with him (Armisen filmed an episode of Seinfeld’s online series “Comedians in Cars Getting Coffee”). Armisen also picked out a mounted butterfly set for Tina Fey after she had a baby, and he later teased Brown about it.

“He said, ‘I talked to Tina and about the butterflies, and there’s only one problem,” Brown related. “They’re all dead!”

Probably the most famous “Portlandia” location is In Other Words, a feminist community center and bookstore that’s the Women and Women First workplace of the characters Toni (Brownstein) and Candace (Armisen). In Other Words is farther north of the North Mississippi Avenue hipster corridor.

“I do find them funny in a very let’s-make-fun-of-ourselves way,” said Caitlyn Kennedy, co-chair of the In Other Words board of directors. “People take feminism to be very serious and at times it can be, but we all need a moment to laugh at ourselves.”

She said some of the shop’s volunteer workers come to In Other Words specifically because of “Portlandia,” while “others have been in the space long enough they’re doing the Portland thing of, ‘Ugh, I’m so over “Portlandia,” and I don’t want anyone to mention it again.’”

As for the depiction of feminist bookstore clerks, Kennedy, 27, said most of the volunteers at In Other Words are in their 20s, significantly younger than Toni and Candace.

“I would say the characters are a little overblown and possibly outlandish, but sometimes the plot is a little spot-on to what happens in that space, so we allow ourselves to see the humor and be the humor,” she said, noting that she was an extra, a customer suspected of giving the bookstore a bad review on Yelp, in season three. “I have heard some stories from the first season that the crew was excited they didn’t have to do anything to (dress) the space.”

An artist had made ceramic vaginas that were on display in the store, and the “Portlandia” crew gladly used them as background in some scenes. (“They thought that was fabulous,” Kennedy said.)

Like some other Portlanders, Kennedy acknowledged she, too, does not have a TV, but she watches “Portlandia” online.

Pattie’s Home Plate Cafe, also on Portland’s east side, was used as the interior for the ”Brunch Village” episode, which was inspired by Screen Door on East Burnside and any number of other restaurants that have a long brunch line. (Gravy on North Mississippi, a few doors up from Land Gallery, also fits the bill.)

Portland has a plastic bag ban in effect, something that was spoofed in a season one episode filmed at one of the upscale Zupan’s Markets, the one located on Southeast Belmont Street. In the sketch, a customer felt the wrath of a clerk when the customer forgot to bring a reusable bag to the store to carry home purchased items.

Portland is a river city — the Willamette River flows past Portland’s Downtown — but its residents seem less reluctant to cross bridges, perhaps due to the abundance of light rail and streetcar options. A new bridge over the Willamette solely for public transportation, bikes and pedestrians is slated to open in September.

Along a bike/walking trail on the east bank of the Willamette visitors can find shooting locations for the defining “Portlandia” music video.

“The Dream of the ‘90s is Alive in Portland,” which kicked off the series in its first season, was filmed at the Vera Katz Eastside Esplanade and other locations along the waterfront path. It’s also where the iconic view of a drawbridge — the Morrison Street Bridge — closing in the show’s opening credits was filmed.

Across the river in Downtown Portland, other “Portlandia” locations abound, including City Hall — home to the office of the fictional Portland mayor played by Kyle MacLachlan — and just around the corner from City Hall is the Portlandia statue on the Portland Building, which was also glimpsed in the show’s original opening credits sequence.

No trip to Portland is complete without a stop at the enormous Powell’s Books, which hipster Spike (Armisen) pedaled past in a season one episode.

Voodoo Doughnut is another landmark that was featured in a season two episode. The original outlet on Southwest Third Avenue is just across the street from another element from the show’s opening credits: the “Keep Portland Weird” mural. Although the cash-only Voodoo is open 24 hours a day (closed on Thanksgiving, Christmas and New Year’s Day), the line to buy doughnuts is often long. Consider visiting a location across the river on the East Side in an old fast-food restaurant building. Voodoo Doughnut Too (Two) has a parking lot and sometimes a shorter line.

Finally, for a true “Portlandia” vacation, consider staying at Downtown’s Ace Hotel, a three-minute walk from Powell’s and the inspiration for the hipster-infested Deuce Hotel sketch, where hotel guests were offered complimentary turntables and typewriters at check-in.