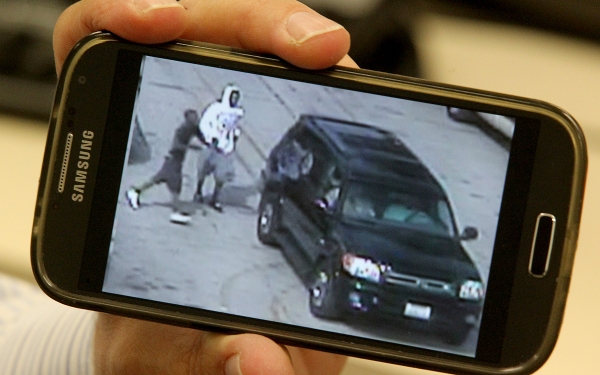 Just days before, a man had been shot to death nearby in his car. Corlin navigates narrow roads with one-story homes and drives past churches and boarded-up markets, on the hunt for the next best thing to a witness to the killing: surveillance cameras.

Corlin, 57, doesn’t have a badge. He’s a Los Angeles Police Department volunteer and self-professed “gadget guy” who has aided in dozens of homicide investigations by tracking down and downloading surveillance video that may have captured a crime.

Corlin heads down East 92nd Street in his car and spots a two-story duplex with a camera on the side. He squints to see the numbers, and he pulls over to log the address.

Even if the camera didn’t catch the crime, it might have caught parts of the story.

His crime-fighting hobby began when he started to invest in rental properties in the 1990s and realized how many crimes are committed around or in rental units. He saw the cameras as a tool and installed surveillance systems on his properties in South L.A. in the early 2000s.

His theory was simple: If he could improve the quality of life for his residents, he’d have better tenants.

As he started working with property owners, he also formed relationships with police. He kept track of crime in the area and started volunteering to pull video from his own units.

“It kind of evolved,” he says.

On a recent afternoon, Corlin walks through the Southeast Community Police Station. A woman smiles and says, “Hi, Arnie.” He waves.

“They think I work here,” he says.

The task of searching for surveillance cameras can be tedious for detectives who need to conduct interviews in the first hours of an investigation.

“It’s a lot of driving, a lot of gas and a lot of time,” Corlin says. He spends about 100 hours a month helping the police.

The work isn’t always easy. A close call in 2009 remains a vivid memory.

In the middle of the afternoon, Corlin was on a ladder tinkering with a camera in the front yard of a rental property. A blue SUV sped down West 73rd Street, bullets flying. He ran behind the home, pulled out his phone and called police.

“You have a calm, sunny day, and things change in an instant,” he says.

While scouting out cameras, he also keeps an eye on his surroundings. A man pedals by on a bike, and Corlin smiles and says hello.

“People are watching me — I want to be sure I’m watching them,” he says.

Over the years, Corlin has learned a few things: Markets and liquor stores usually have surveillance systems. Homeowners usually place their cameras near the front door.

He knows more about cameras than does the average person, easily spotting the difference between a fake camera meant as a deterrent and a real one.

Corlin drives down a residential street, his head poking out the SUV window.

He passes a beige home with a yellow sign warning people they’re being recorded. “Smile, you’re on camera,” the sign reads. A camera is positioned near the roof.

“That’s a fake one,” he says confidently.

Corlin has an arsenal of tools (“his magic bag”) when he’s out working the camera beat.

He carries flashlights, magnifying glasses, numerous thumb drives and many cables. Camera systems can be kept in dark corners, and he needs the drives to save the video. He also brings a roll-up keyboard and multiple monitors.

“I have backups for backups,” he says.

The equipment is for times like one last year. He was running errands on a Saturday morning when he heard a call on the police radio. A man had been shot, and his car had crashed near a pole.

Corlin drove to the crime scene. The detectives had already found video from a nearby gas station but needed Corlin’s help in retrieving it from the computer.

The video showed the car crashing. Corlin went to work.

Hours later, the video was on a CD and in the detectives’ hands.

But Corlin’s job wasn’t done yet — detectives had found another camera in a nearby market. The recording showed the shooting, an edge for detectives.

A man on a bike had fired several shots at Leonel Estuardo Beltan.

In Beltran’s case, the video solidified the evidence. Jesus Lizarraga was convicted of murder in June and later sentenced to 40 years to life.

Corlin is “a tremendous help to us,” says LAPD Det. Rick Gordon, who oversees a group of detectives in Southeast Los Angeles. “He’s very good at what he does. He’s dedicated, a very selfless individual.”

Corlin, who was raised in Detroit, has had an interest in law enforcement dating to his teenage years.

He was as a volunteer traffic reporter in high school, where he learned to decipher police codes. And then, in college, he volunteered as a dispatcher for the Western Michigan University Department of Public Safety in college.

During breaks, he worked with a private ambulance company in the Michigan suburbs, rolling out to homicides, car collisions and shootings.

Corlin came to Los Angeles in 1977 for a cousin’s wedding and never left. He started volunteering for the LAPD after the 1992 riots and helped out with drunken-driving and prostitution task forces throughout the city.

Corlin often knocks on tenants’ doors and reaches out to other apartment owners. Because of his efforts, many businesses in Southeast L.A. are now equipped with cameras, LAPD Capt. Phil Tingrides says.

“When you solve the crime and you have the video to show the jury ... when you see it, it’s so much more in cold blood,” Tingrides says. “It’s one of those things that shocks the conscience.”

Though the video in the Beltran case showed the shooting, Corlin still wasn’t satisfied. He went back to the area two days later to log camera locations.

“You just want to solidify it,” he says. “You don’t want to leave anything undone.”

Corlin drives down South Main Street and parks near a two-story apartment complex. When he bought the property more than a decade ago, the area was rife with drug deals and loitering.

“You wouldn’t have stood out here, day or night,” he says. Now, a small camera monitors the area from atop a 30-foot-high pole.

He says the key to cleaning up a neighborhood is getting the community involved and the other building owners and tenants on your side.

“The tenants know everything. They’re the boots on the ground,” he says.

Corlin is also acutely aware of time restrictions when it comes to the cameras. Often, video can be erased if left untouched for too long.

When 78-year-old Joseph Gatto was shot in his Silver Lake home in November, Corlin worried that valuable evidence could be erased.

“Time is not our friend when it comes to the videos,” he says.

Even though it made him late for his family’s Thanksgiving meal, he drove from his home in West L.A. to Silver Lake and explored the winding streets. He knocked on doors, asking homeowners if they had video.

“I was just out canvassing, trying to find others desperately, because I know we needed leads,” he says. The killing remains unsolved.

Back in Watts, family and friends have set up a memorial for Joshua Dontae Johnson, the 28-year-old killed in his car. Nearby, Corlin spots a small camera on the side of a light-yellow home and marks down the address on a notepad.

“It could be that one camera.”