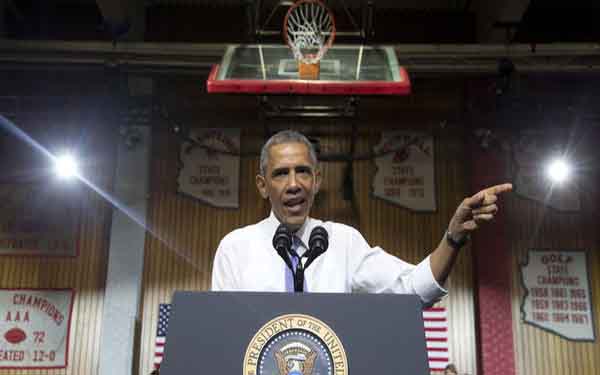 WASHINGTON — There are at least six reasons that community college won’t be free anytime soon, no matter what President Barack Obama says.

Obama, who traveled Friday to Pellissippi State Community College in Knoxville, Tenn., to tout the America’s College Promise plan, said he wanted to make higher education as accessible as a high school diploma for all Americans.

But the plan has flaws that all but ensure it won’t be implemented and will serve only as a political proposal to make supporters happy. Among the reasons:

It would cost $60 billion over 10 years. White House officials wouldn’t say where they would find the billions to pay for it. And the spending would have to be approved by Congress, where Republicans just gained seats in midterm elections after campaigning against more federal spending.

Administration officials say they’ll indicate where the money will come from when Obama releases his budget proposal Feb. 2. “Without details to review, this plan is more like a talking point,” said Cory Fritz, a spokesman for House Speaker John Boehner, R-Ohio.

In December, the national debt reached $18 trillion, sparking renewed criticism from fiscal conservatives about the increase in government spending. Obama touted the declining federal budget deficit when he spoke in Knoxville on Friday, but he didn’t mention that the debt continues to increase.

“Why stop there?” Republican Louisiana Gov. Bobby Jindal said. “Why not have the government buy a car and a house for everyone?”

While the federal government would pick up 75 percent of the tab, the final quarter would come from states that opt into the program. The states, which have already slashed funding for colleges and universities as they face budget shortfalls and competing priorities, would have to cut other programs to pay for the cost or to raise taxes.

The program would provide aid to some students who don’t need it, instead of focusing on low-income students through, for example, expanding Pell Grants or reducing the paperwork for student aid. Administration officials estimate that 9 million students could participate if they attend at least half-time, maintain 2.5 GPAs and make progress toward completing degrees or certificate programs.

“Making tuition free for all students regardless of their income is a missed opportunity to focus resources on the students who need aid the most,” said the Institute for College Access & Success, which usually sides with the Obama administration.

The lure of free tuition might lead some students who should go straight to four-year institutions to attend community colleges instead.

“Why support community college instead of college?” asked Russ Whitehurst, a former official at the Department of Education who now heads the Brown Center on Education Policy at the Brookings Institution, a center-left policy research center.

States and community colleges would have to abide by certain rules to get the federal money. For example, states would have to agree not to cut higher education funding elsewhere to pay for the proposal.

Community colleges would have to offer programs that transfer to public four-year colleges or lead to degrees and certificates that are in demand among employers, and implement programs that would improve student achievements.