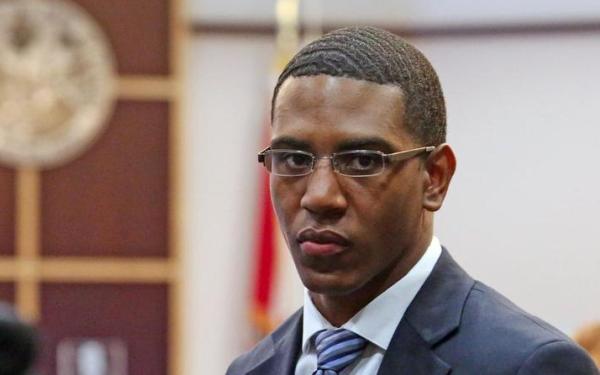 Before her ruling Circuit Judge Renee Roche called Martin a “remarkable young man” with “limitless potential” and a strong support system, based on testimony. She added, “On the other hand, the circumstances of this death were so profoundly disturbing.

“Forgiveness doesn’t have a role in the legal system,” she said. The goal of sentencing, she said, is “punishment. … All other things are secondary.”

Martin, 27, faced up to 22 years in prison for his role in the killing.

In October, an Orange County jury found Martin guilty of manslaughter and other charges in the hazings of Champion and two other band members.

In testimony Friday morning a number of character witnesses, including Martin’s sister and mother, vouched for him, saying Martin was a dependable, loving person and noting his lack of a criminal history.

Martin himself took the stand, saying he prays for the Champion family and vowing to speak out against hazing.

“Sometimes we just go with what is tradition,” Martin said of the incident that killed Champion. “We don’t second guess it, we don’t doubt it.”

“My son was against hazing,” the senior Champion said. “Not one time in court have you heard that my son put his hand on anybody.”

Champion says that he feels for Martin’s family, but “today we’ve got to set an example that this has got to stop now.”

He asked the judge to give Martin house arrest and community service, but no prison.

The hazings occurred Nov. 19, 2011, on a band bus after the famed Marching 100 had performed at the Citrus Bowl during halftime of an annual football game between FAMU and traditional rival Bethune-Cookman University. The bus was parked at the Rosen Plaza hotel, where the marching band was staying.

Tampa defense lawyers Richard Escobar and Michaels submitted a sentencing memorandum earlier this week, urging Judge Roche to hand down a lesser sentence than state guidelines recommend because Champion was “an initiator, willing participant” in the ritual that killed him.

They pointed out that witnesses in Martin’s trial insisted no one was ever forced to participate in hazings. The lawyers also said in court documents that Lissette Sanchez, a graduate of Oak Ridge High School who was hazed the same night as Champion, allowed band members to beat on her to earn “bragging rights.”

Escobar said Martin should get punishment similar to other band members who participated in the hazings known as “Crossing Bus C.”

Nine ex-band members have been sentenced for their roles in Champion’s death and nearly all were given community-service sanctions and probation.

Not one has been sent to prison. Ex-band member Jessie Baskin of Miami, facing nine years in prison, was ordered to serve 51 weeks in jail.

Trials are set for later this year for three other band members.

Martin’s lawyers contend he was no more culpable for Champion’s death than other participants, though he was regarded unofficially as the “Bus C President” who organized hazings during the marching band’s junkets.

“There was not a scintilla of evidence that (Martin) encouraged anyone to hit or kick Mr. Champion or anyone else,” Escobar said in the documents.

The hazing required Champion to make his way shirtless from the front of the parked bus to the back, bulling through a gantlet of band members blocking the aisle. The band members punched and kicked the drum major and clubbed him with a drum mallet and other objects, including an orange traffic cone.

A medical examiner concluded Champion died of soft tissue bleeding caused by the flurry of blows he absorbed.

Martin’s lawyers provided the judge with letters, hoping to paint a more sympathetic portrait of Martin. Some were written by former FAMU band members who remembered Martin not as a hazing ringleader, but as a musician who encouraged others in the ensemble to improve themselves and the band.

“I truly hope this sentence does not ruin Dante’s (life) and that he is given a second chance to redeem himself for taking part in a situation that everyone regrets,” said Jofree Joseph, a former section leader in the Marching 100.

The lawyers also have asked the judge to let Martin out on bond while they appeal the jury verdict.

The hazing scandal led to the suspension of the band, the unexpected retirement of its director and the ouster of the university’s president.

Champion’s parents, who deny their son voluntarily participated in the hazing, have sued FAMU, alleging the historically black school allowed a culture of hazing to fester in its famous marching band. The band has performed at presidential inaugurations, the Grammy Awards and the Super Bowl.