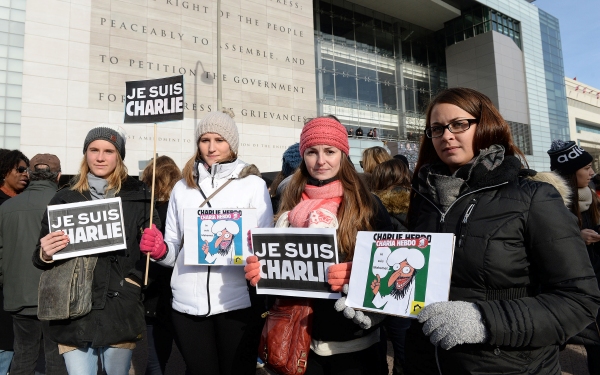 PARIS — As many as two million people — including 50 world leaders — marched through the streets of Paris in an enormous outpouring of grief and defiance Sunday, sparked by three days of violence last week that claimed the lives of 17 people.

But as Europeans once again gathered to mourn those killed by terrorism, there were growing concerns that not only would there be more attacks, but also that Europe’s mood may be headed toward a backlash against its burgeoning Muslim population.

U.S. Attorney General Eric H. Holder Jr. and Alejandro Mayorkas, the deputy secretary of homeland security, were in Paris for meetings with French officials, but only the U.S. ambassador to France, Jane Hartley, joined the rally.

The marchers waved French flags and held aloft signs modeled on the “Je suis Charlie” motto that has been repeated again and again around the world since the attacks. The meanings: “I am Charlie,” “I am Jewish,” “I am the police” and “I am Muslim.” Again and again, marchers noted that it was important to show unity and take a stand against terrorism.

But the signs of a more divisive message weren’t far. Marine le Pen, the leader of the French National Front, an anti-immigrant political party, who has used the attacks to call for France to reinstitute the death penalty and has said calls for unity are unrealistic, wasn’t invited to attend.

In Germany, the justice minister called on another anti-immigrant movement, Patriotic Europeans Against the Islamization of the West, known by the initials PEGIDA, to cancel its weekly anti-immigrant rally in Dresden on Monday out of fear than a turnout of thousands would inflame tensions. There was no sign that the movement was willing to do so.

Observers said that despite the rally in Paris, there were signs that Europe was headed for angrier and angrier confrontations.

“I have good friends, leftists, who are now saying there really seems to be something wrong with Muslims,” said Laurence Nardon, a security expert at the French Institute of International Relations in Paris. “Will this become a matter of ‘us’ and ‘them’?”

In Germany, unknown assailants firebombed the offices of the Hamburg Morgenpost newspaper. The damage was minor, but extremist Muslims were blamed. The newspaper ran a collection of Charlie Hebdo cartoons as a tribute to the five cartoonists killed in last week’s attack.

In Belgium, the office of the Belgian newspaper Le Soir was evacuated Sunday because of a bomb threat that mentioned its publication of the Charlie Hebdo cartoons that depicted the Prophet Muhammad.

There was still uncertainty surrounding how French authorities missed the Charlie Hebdo plot, which was carried out by two brothers, Said and Cherif Kouachi. They were were well-known Islamist radicals. Questions remained about who else might have known of their plans.

Cherif Kouachi told a French TV interviewer before he was killed by French police on Friday that the brothers were part of Al-Qaida in the Arabian Peninsula, the Yemeni branch of the terrorist movement founded by Osama bin Laden. He told the interviewer that he had met with American-born cleric Anwar Awlaki during a visit to Yemen. (Awlaki was killed in 2011 in a U.S. drone strike.) Kouachi also said Awlaki had financed his activities.

But the extent of AQAP’s involvement in last week’s attack on Charlie Hebdo remains unresolved, a Yemeni official briefed on security matters said in London.

“The important question: did AQAP plan or execute this?” remains unanswered, the official said on the condition of anonymity because of the sensitivity of the subject.

The official said Yemeni officials have no doubt that both Kouachi brothers had visited Yemen, perhaps more than once, but that it was still unknown whether they had met with Awlaki.

The official said Yemeni authorities’ main focus now is a looming war between Iran-aligned insurgents known as the Houthis and their Sunni Muslim opponents in Marib province east of the capital, Sanaa.

Meanwhile, a video posted on the Internet added new doubts about the origins of the violence. In it, the third gunman in last week’s attacks, Amedy Coulibaly, pledged allegiance to the Islamic State. It was unclear when Coulibaly, who died Friday when police stormed the Paris grocery where he had killed four hostages, had recorded the video.

But its emergence two days after his death raised questions about who prepared the video for release. Coulibaly’s wife, Hatay Boumeddiene — the two were married in a religious ceremony in 2009, according to news media reports — is believed likely to have fled to Islamic State-controlled parts of Syria. Turkish officials say her cellphone was last detected in a Turkish border town on Thursday.

Reports surfaced over the weekend that Coulibaly also planned to record video at the kosher grocery where he took 15 hostages. A video interview posted by the German newspaper Bild with the brother of the manager of the store said Coulibaly “came in here with two Khalashnikovs and a Go-Pro camera.” He said Coulibaly tried to force his victims to look into the camera and say hello to the Islamic State.

The French newspaper Le Monde reported that a Go-Pro camera also was found among the items recovered from the getaway car the Kouachis abandoned after their assault on the Charlie Hebdo offices.