Ohio State against Oregon - how they match up 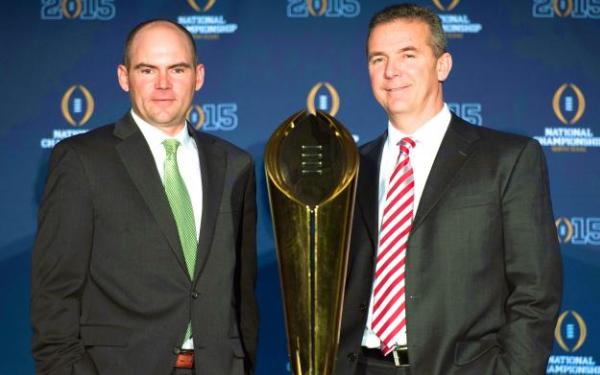 A comparison of Oregon and Ohio State ahead of the College Football Playoff championship game on Monday in Arlington, Texas:

Oregon became a three-headed rushing monster again in the Rose Bowl with the return of tailback Thomas Tyner from injury. Tyner rushed for 124 yards and two scores in the Ducks’ 59-20 win over Florida State. Oregon’s top three rushers, Royce Freeman, quarterback Marcus Mariota and Tyner, have combined for 2,585 yards and 38 touchdowns. Depth at the position allowed Oregon to move Byron Marshall, last year’s leading rusher, to receiver. The Ducks average 242 rushing yards per game and led the Pac-12 in that category for a league-record ninth straight season. Ohio State’s front seven, led by All-American defensive end Joey Bosa, ranks No. 34 nationally in stopping the run. The Buckeyes allow 142 yards per game and are coming off two strong performances. Ohio State held Wisconsin’s Melvin Gordon, the nation’s leading rusher, to 76 yards in the Big Ten title game and limited Alabama to 170, which was 36 yards below the team’s average.

The question is how many receivers Oregon can lose before it starts to show. The Ducks lost starter Devon Allen on the first play of the Rose Bowl, but Darren Carrington more than picked up the slack with 165 receiving yards with two touchdowns. But now Carrington is out after failing a drug test, which puts more pressure on freshman Charles Nelson and veteran Keanan Lowe, who was slowed by late-season injuries and hasn’t caught a pass since Nov. 22 against Colorado. Ohio State led the Big Ten with 24 interceptions, led by Vonn Bell’s six. Doran Grant added five, while Tyvis Powell had four.

Ohio State ranks third in the Big Ten, averaging 262 yards per game. Sophomore tailback Ezekiel Elliott leads the team with 1,632 rushing yards and 14 touchdowns. He rushed for 220 yards in the Big Ten title game and 230 more against Alabama in the Sugar Bowl. Third-string quarterback Cardale Jones is not as proficient a runner as Braxton Miller or J.T. Barrett, but he is a load at 6 feet 5 and 250 pounds and is hard to tackle. Oregon’s defensive front is tall and athletic, with a classic bend-but-don’t break mentality. The Ducks have, historically, made it a point to stop the run first. Oregon allows 156 yards per game and is led by emerging defensive end DeForest Buckner, who leads the team with 13 tackles for losses.

This is one of the more intriguing matchups as Jones tests an Oregon unit that ranks No. 108 nationally in average yards allowed (266). Jones has a big arm and promises to stretch a Ducks secondary missing All-American cornerback Ifo Ekpre-Olomu. Jones has passed for 500 yards in his two starts since replacing the injured Barrett and will no doubt try to go deep often with speedy receiver Devin Smith, whose 30 career receiving touchdowns rank second in school history behind David Boston’s 34. Evan Spencer is the inspirational leader of the receiver corps and has 29 career starts. Oregon survived the loss of Ekpre-Olomu in the Rose Bowl but allowed 348 passing yards. The secondary is led by senior safety Erick Dargan, who has six interceptions.

Ohio State punter Cameron Johnston ranked second in the Big Ten with a per-kick average of 45.3. He has 22 punts inside the opponents’ 20-yard line. Sean Nuernberger has made 13 of 20 field goals with a long of 49. Two Oregon kickers, Aidan Schneider and Matt Wogan, have combined to make 16 of 19 attempts. Schneider was three for four in the Pac-12 title game and hit on a 42-yard attempt in the Rose Bowl. Ian Wheeler averages 39 yards per punt with a long of 53. All-purpose receiver Nelson is also a special teams star. The true freshman has returned two punts for scores and, with 16, leads the team with tackles on kickoff coverage.

This is the first coaching matchup between Oregon’s Mark Helfrich and Ohio State’s Urban Meyer. Helfrich, a former assistant coach under Chip Kelly, is 24-3 in two seasons at Oregon, while Meyer is 37-3 in his third year at Ohio State. Meyer has yet to lose a regular-season Big Ten game. He is 141-26 in 13 total seasons at Bowling Green, Utah, Florida and Ohio State. Meyer led Utah to an undefeated 2004 season and Florida to national titles in 2006 and 2008.