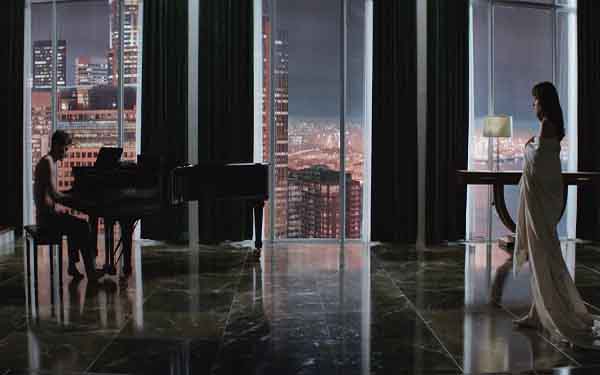 Sam Taylor-Johnson had been working in secrecy for months when she finally got an opportunity to play footage of her new film for a fresh-eyed viewer — Beyonce.

Last year, Taylor-Johnson brought scenes from the film to Beyonce’s home in Los Angeles so the pop star could see how her music would underpin the steamy drama about a mousy recent college graduate, Anastasia Steele (played by Dakota Johnson), who enters into a sexually submissive relationship with an enigmatic young billionaire, Christian Grey (Jamie Dornan).

“As the scene opened there was no context,” Taylor-Johnson said, recalling the footage she shared with Beyonce. “There wasn’t the slow meeting and the interview and the coffee shop, it was just, here’s a hardcore sex scene, hey, nice to meet you ... I suddenly felt myself recoil. I suddenly thought, ‘This is really explicit, and I don’t even know this woman.’”

Taylor-Johnson is going to be sharing those scenes with a much larger audience soon, when “Fifty Shades of Grey” arrives in theaters Feb. 13.

Like “Star Wars” and countless comic book movies, the film has an ardent and particular audience to please. Originally self-published as a piece of “Twilight” fan fiction, the book literally sprouted from the world of avid fandom, and, in a sign of how much those fans are hungering for the film, the “trailer was the most watched of 2014, racking up 93 million YouTube views since its debut in July.

Taylor-Johnson comes to the project with a distinct artistic vision, particularly about the film’s sexual politics, and some valuable experience with devotees — her previous feature was the 2009 John Lennon biopic “Nowhere Boy.” But with just one independent feature under her belt, she isn’t the most obvious candidate to helm a big commercial studio film.

“I remember one of the [”Fifty Shades”] producers saying to me, ‘Can you handle making a movie with such a big fan base?’” she said. “I reminded him I did make a movie about one of the Beatles. And it was a similar situation as soon as the casting began — everyone pitches in with, you have to do this and you can’t do that. So there must be some sense of needing a challenge that I throw upon myself.”

Petite, with a bit of punk-rock pink in her hair, Taylor-Johnson, 47, is soft-spoken but direct. She projects a calm — perhaps it comes from her practice of Transcendental Meditation or perhaps it’s that she’s spent a lot of time in dark rooms recently taking executives’ notes about thrusting.

A visual artist before she became a filmmaker, Taylor-Johnson has a knack for capturing men at their most vulnerable. She is perhaps best known as a photographer for “Crying Men,” a 2004 series of actors weeping, including Robin Williams, Laurence Fishburne and Dustin Hoffman. Commissioned by London’s National Portrait Gallery to film a video portrait of David Beckham, she opted to photograph the soccer star sleeping. After directing short films — including one about a man masturbating in the desert — she made “Nowhere Boy,” which depicts how Lennon was shaped by two powerful women in his life, his mother and his aunt.

By contrast, “Fifty Shades” depicts an almost primitive male-female relationship, with a powerful man seeming to control a young, impressionable woman. At the height of the book’s popularity, a “Today” show segment explored whether it promoted violence against women, and a Newsweek article suggested that empowered women were reading it because being a breadwinner was getting boring.

Taylor-Johnson’s goal was to find the nuances in the relationship.

“The book appealed to me because it was a dark and tragic love story,” she said. “I had a distinct approach to feeling that she was empowered even though she was in a place where she could be seen as a victim, and even though this relationship is about dominance and submission, to have it be an equal journey. It’s pretty complex, and I’m constantly feeling like I’m on a knife’s edge.”

Taylor-Johnson’s own personal life reflects a willingness to flout convention — in 2012 she married Aaron Johnson, the English actor whom she cast as Lennon in “Nowhere Boy” when he was 19 and she was 42 and who now goes by Aaron Taylor-Johnson. She has four daughters, two with Taylor-Johnson and two from a previous marriage to art dealer Jay Jopling.

She moved her family of six from London to Hollywood while making “Fifty Shades.” “There’s space and big skies and sunshine,” she said of living in SoCal. “I have a much calmer lifestyle here, ‘cause I can’t have a mad life and work on a mad film.”

Taylor-Johnson’s “Fifty Shades” ride had an abrupt start. She had been haranguing one of the movie’s producers, Michael De Luca, about another film he was planning when he asked her to come in for a meeting about directing the James novel, at the time among the hottest properties in town. She assumed she was a long shot for such a high-profile project — other directors Universal Pictures was considering included Joe Wright, Bennett Miller and Steven Soderbergh.

“My agent said it would be good practice for me,” Taylor-Johnson said. “It was a room full of 15 people. It was really intimidating. I had cut together a mood reel. I had music ideas, boards of lighting. I really worked to make sure I was taken seriously. The next day they called me at 8 in the morning and said, ‘You’ve got the job, and we’re announcing it at lunchtime.’”

James was a hands-on producer. The author was in the room when Taylor-Johnson first made her pitch for the job, and she had approval over the script by Kelly Marcel, the casting and the wardrobe, which led to heated discussions, Taylor-Johnson said.

For one scene, the director wanted to modify a tight dress described specifically in the book. “I said it’s not right for this scene ‘cause she wouldn’t be able to dance in a dress that tight,” Taylor-Johnson said. “And everyone goes to their panic stations.” (Ultimately she won out, and the flowy dress is in the film.

To cast Anastasia, somewhat improbably, she had actresses read an intense, four-page monologue from the 1966 Ingmar Bergman film “Persona” before settling on Johnson, the actress and model who is the daughter of Don Johnson and Melanie Griffith.

“Considering the world in which she grew up, Dakota has a very sweet, naive sensibility, but she has this inner strength and power which exudes on screen,” Taylor-Johnson said of her leading lady. After a previous actor, Charlie Hunnam, fell through, Northern Irish actor Jamie Dornan, known mainly for his television and modeling work, was cast as Christian Grey on the strength of his chemistry with Johnson.

With a roughly $40-million budget, Taylor-Johnson set about recreating Grey’s lavish lifestyle, including his personal helicopter, tailored gray suits and the red room where he deploys his whips and paddles.

A final challenge was to secure an R-rating from the Motion Picture Assn. of America’s ratings board without sacrificing any of the heat that helped make the book a hit.

“We’ve edited it in a way where I feel proud,” Taylor-Johnson said. “It’s dirty but classy. It feels pretty balanced: a nipple of hers, a butt cheek of his.”

The studio has not announced whether it will make the second and third books, and Taylor-Johnson is mum about whether she’d participate. Mostly she’s eager that audiences finally see what she’s had to keep hidden from nearly everyone but Beyonce.

“When the scene finished, Beyonce just went, ‘Wow, that was hot,’” Taylor-Johnson said. “So I thought, ‘OK, that was fun. That was a good day at the office.’”