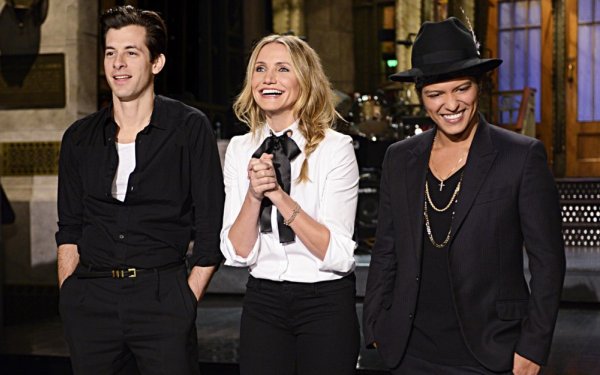 Renowned for years as a behind-the-scenes hitmaker, Mark Ronson clearly remembers the conversation about his potential solo career.

It was early 2008, not long after that year’s Grammy Awards, where the producer shared several prizes, including record of the year, for his work on Amy Winehouse’s smash “Back to Black” album. Ronson had also just released his own record, a set of smartly appointed covers that featured a track with Winehouse, the fiercely talented yet troubled soul singer who died in 2011.

Their song, an earthy rendition of “Valerie” by the British band the Zutons, had exploded in Europe, and Ronson was in talks with his American label to put it out as a single here.

“But the radio (promotions) guy was like, ‘America will never get with the concept of a record under the producer’s name,’” Ronson recalled recently. “He said, ‘That’s a European thing. You have to accept that it just won’t work.’”

Seven years later, the concept is working quite well, thank you very much. On Wednesday “Uptown Funk,” Ronson’s current single, unseated Taylor Swift’s “Blank Space” atop Billboard’s Hot 100, the latest achievement for a track that has sold 1.7-million copies in the United States, according to Nielsen SoundScan, and been streamed more than 130 million times on YouTube and Spotify.

An irresistible (and aptly titled) party jam with vocals by Bruno Mars, “Uptown Funk” — the lead cut from Ronson’s genre-mashing new album, “Uptown Special,” due Tuesday from RCA Records — follows recent hits such as Pharrell Williams’ “Happy” and Calvin Harris’ “Summer” in demonstrating that American audiences have come around to the idea of pop songs released by knob-twirling studio types. For Ronson, the song is also proof that he’s rediscovered his mojo after going through a rough patch.

Sitting outside his friend (and fellow producer) Jeff Bhasker’s Venice studio the morning after he performed on “The Voice,” Ronson, 39, said he went into making “Uptown Special,” his fourth album, “with the knowledge that this was a bit like the Last Chance Saloon.”

The multi-instrumentalist, born in London but raised from age 8 in New York, emerged in the late ‘90s as one of the earliest so-called celebrity DJs: a well-connected scenester regularly called upon to move crowds at movie premieres and media events. (Ronson’s famous family includes his mother, socialite Ann Dexter-Jones; his stepfather, Mick Jones of the band Foreigner; and his sister Charlotte Ronson, the fashion designer.)

He later moved into producing, developing a crisp neo-Motown sound — think live bass and guitar against blocky hip-hop drums — on records by Winehouse, Lily Allen and Adele, among others. That success created an appetite for his covers album, “Version,” and eventually songs of his own.

Ronson’s production work “went pretty cold after that,” he said, chewing a toothpick as he spoke in his hushed trans-Atlantic murmur. “I wasn’t getting those A-list gigs anymore.”

So he focused instead on his music, even as the rise of DJs like Skrillex and Baauer — festival headliners armed with harsh synth tones and jock-jammy beats — left the more genteel Ronson feeling unsure where he might fit in.

For help with his next move he turned to Bhasker, known for his collaborations with Kanye West, Beyonce and Alicia Keys. The producers had worked together on Mars’ song “Locked Out of Heaven,” and that experience convinced Ronson that Bhasker might know how to combine their mutual love of old-school funk and R&B with a flair for writing “amazing pop tunes,” as Ronson described Bhasker’s talent.

Now based in London with his wife, actor-model Josephine de La Baume, Ronson came to L.A., where Bhasker operates out of a small studio tucked behind a house on a quiet street near the beach, “just to see what would happen.”

What happened was songs, or at least the beginnings of them: trippy blue-eyed soul numbers like “Summer Breaking” and “Crack in the Pearl,” with echoes of Steely Dan; fuzzy glam-rock rave-ups like “Leaving Los Feliz” and “In Case of Fire”; the Prince-influenced “Uptown Funk” and the taut James Brown homage “Feel Right.”

“Mark is a musical force to be reckoned with,” said Bhasker, who described long nights in the studio together tweaking sounds and getting harmonies just right. “And he pushed me. I used to say Kanye is the hardest-working person I know, but Mark rivals that.

“I think that’s one of the reasons he’s so soft-spoken,” Bhasker added with a laugh. “He’s just exhausted.”

Even so, they weren’t finding what they needed to complete the songs. One night, Ronson said, “we were sitting out here by the pool, Jeff with his Jameson in one hand, kind of loose, and he said, ‘Man, we need to go on a drive through the South and get to the real heart of American music.’”

Ronson assumed it was the whiskey talking, but the next day Bhasker brought it up again. “I was like, oh, wow — he really wants to do this,” Ronson said. So with the assistance of regional representatives from a handful of gospel labels, the two set out on a 10-day road trip through Mississippi and Louisiana, searching for “this incredible singer that we heard in our head,” said Ronson.

They found her in an audition on the campus of Jackson State University: 24-year-old Keyone Starr, who brings a throaty intensity to “I Can’t Lose,” a Chaka Khan-style highlight on “Uptown Special” that also features New Orleans’ Trombone Shorty.

“We could’ve gotten Beyonce,” Bhasker boasted (and he may be right). “But to have the music stand on its own with a great new voice — that was exciting.”

Starr and Trombone Shorty aren’t the only guests on the album, parts of which were recorded at Royal Studios in Memphis, where producer Willie Mitchell made classic early-’70s records by Al Green and Ann Peebles.

“You’d be there and you’d see the electronic bongo machine from ‘I Can’t Stand the Rain,’” Ronson recalled. “It’s like, ‘Well, we’re definitely using that.’”

Green’s longtime guitarist Teenie Hodges plays on “Uptown’s First Finale,” one of his last performances before he died last year. Other contributors include Stevie Wonder, Kevin Parker of the Australian band Tame Impala and the hyperactive rapper Mystikal, who recently put in a memorable appearance with Ronson on “Saturday Night Live.”

Some songs also feature densely allusive lyrics by novelist Michael Chabon, a favorite of Ronson’s whom the producer invited to participate after he met Chabon at a book signing.

“I wanted stories but better than I’m capable of,” Ronson said. “He liked some of my music, so I wrote him an email and asked if he’d like to work on this record.”

Bhasker added that Chabon’s words, about shadowy casinos and “the cool underbelly of the blue evening,” boosted the music’s Steely Dan vibe. “Their lyrical palette is so rich,” he said of the famously brainy jazz-rock group. “We needed a ringer to get that level of intricacy.”

The resulting album is willfully eclectic but hangs together, the product of a musical mind that’s always sought out the groove connecting disparate styles. Thinking back to his days DJing in New York hip-hop clubs, Ronson proudly described moving from Puff Daddy’s “It’s All About the Benjamins” to AC/DC’s “Back in Black” without losing the dance floor.

“Then I could play Joan Jett’s ‘I Love Rock ‘n’ Roll,’” he said, “and by the end you’d have Method Man and Lil’ Kim on a banquette, pumping their fists.”

And anyway, Ronson added, genres are of little concern to a young audience that barely remembers an age before iTunes. Ditto one that views a DJ or producer much the same as a singer or guitarist.

“Because I love all this stuff, it’s never seemed that different to me,” he said.

“Mark is the film director,” said Corson, “and he’s casting all these different characters for the record.”

These days, Ronson said, he can feel like he’s playing a role too.

“I always had a very pragmatic understanding of what a hit was, which is that my friends liked my song, or it was on Radio 1,” he said, referring to the BBC channel. But the reception of “Uptown Funk” “is an entirely different thing. It’s almost like it’s happening to someone else.” He chuckled quietly.

“Sometimes I want to call myself and say, ‘Hey, congratulations on your record.’”