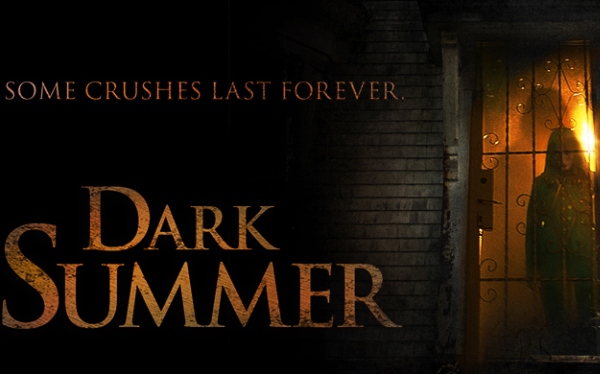 School’s out, the other kids are going on their rad summer vacations, and there Daniel is, on house arrest and with a freshly broken heart. Yep, house arrest sure can put a damper on your summertime fun, especially when there’s a demon stuck inside the house with you.

Welcome to Dark Summer, IFC Midnight’s latest foray into the supernatural world of poltergeists, demons, and/or witches—its kind of hard to tell which it is. But that doesn’t stop director Paul Solet (Grace) from ambitiously quarantining the skin-crawling themes of obsession, lust, and paranormal activity all under one extremely unfortunate roof.

Daniel (Kier Gilchrist, It’s Kind of a Funny Story) is essentially a victim of misfortune, all beginning with gruff policeman Stokes (Peter Stormare, Fargo) securing a security anklet on his leg, trapping the angsty teenager in his empty home for the summer. The punishment is the result of Daniel’s infatuations for a girl named Mona (Grace Phipps, Teen Beach Movie) going overboard, as he attempted to use his rather genius hacking skills to break into her computer and find out all of her deepest desires. Sadly, he wasn’t quite discrete enough.

Luckily, his two best friends Abby (Stella Maeve, The Runaways) and Kevin (Maestro Harrell, The Promotion) are there to provide the laughs, the liquor, and the weed—all necessary ingredients to forgetting his troubles. Although they can’t quite understand his fixation with the weirdest girl at school who got him into this mess, especially Abby who has serious bedroom eyes for Daniel, they’re ready to be supportive.

The fun and games are short-lived, however, when Daniel witnesses Mona’s suicide on an apparent Skype call she made to him. And of course, that’s the least traumatic thing he’ll experience all week, as Mona’s ghost begins a reign of terror over him and anyone seeking to help him.

Having filled more light-hearted and comedic roles in his fruitful, young career, Gilchrist suits the horror genre rather well, especially as his features grow more gaunt and expressive as he gets older. This comes in handy since Solet and screenwriter Mike Le fill the narrative with claustrophobic imagery concerning Daniel and his often-perceived insanity. Instead of shying away to what surely was a vulnerable character experience, Gilchrist embraced it quite maturely.

What did lack, however, was any depth of character background, assuring us as to who exactly Daniel is and why he is so alone. The script hints at a precarious relationship with his father, but never gives enough body to warrant it even being mentioned. More bothersome though is the reasoning as to why he is alone at home for the summer while on house arrest. It is revealed in passing that his mother is gone on business, but seeing as her son is under house arrest for stalking a girl, it’s hard to imagine such flippancy from a parent—that is of course if they happened to have a broken relationship, but again, that’s never illustrated.

The scares themselves are abundant and mostly effective, relying mostly on jumps and classic musical cues to get the screams flowing, but Dark Summer definitely could have benefitted from clearer outlining of the paranormal activity taking place. By the end, it is somewhat muddled as to what exactly was haunting whom and why, not to mention that Mona herself could have been a physically scarier presence.

Even though there is a lot to build on, Dark Summer marks a solid point in Solet and Le’s somewhat early careers as filmmakers and writers. They’ve laid out a modern foundation for horror to grow and take root, even though the final product remained uneven.

Dark Summer is now playing in select theaters and VOD and opens at Arena Cinema in Hollywood January 23rd.

Enter to win an IFC Midnight DVD pack and a gift certificate to Meltdown Comics by clicking here!