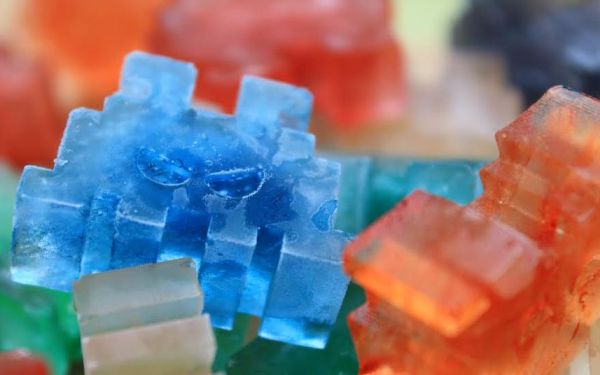 Saturday night I whipped up a batch of Minecraft Mushroom Stew.

Earlier in the day, I walked through some recipes, debating internally whether the stew found in my son’s favorite video game was the best plan for dinner.

My other options included a batch of Apple Cabbage Stew from role-playing game The Elder Scrolls 5: Skyrim, Cook-Cook’s Fiend Stew pulled from Fallout: New Vegas, or, if I wanted to go old school, a BurgerTime double decker.

I landed on the stew and after a fairly short prep time, the family sat down for a bowl of the hearty dish recreated from a game about building things in a vast open world.

The stew, and all of the recipes I pondered over the weekend, come from a relatively new release on Apple’s iBook store: Fry Scores: An Unofficial Guide to Video Game Grub by Holly Green.

The 100-page-or-so cookbook isn’t just a compilation of recipes, it includes part complete creations, part artful recreations. There are 21 recipes in all in the book, and three cocktails, each pulled from a video game.

Green said she came up with the idea after writing a story about the video games she played that made her hungry. In the comment section of the story, readers started talking about how interesting it would be to create the foods in those games in real life.

“The first thing I did was a lot of research,” she said. “I wanted to make sure that while my recipes would be familiar and accessible they wouldn’t be the same as everything else out there.

“I think at the time there were about three video game cooking sites. I didn’t want to step all over what other people were doing.”

Creating the list of what went into the cookbook was a combination of matching her own favorite recipes with famous ones found in games, and tracking down in-game meals that hinted at how a dish was prepared.

So for the sandwich pulled from the game Deadly Premonition, Green had a relatively solid ingredient list to work from and an idea of what the end result looked like.

The end result is something Green calls the poor man’s take on a Monte Cristo. It includes cereal, turkey and jam.

When creating the stew from role-playing gameFallout: New Vegas, Holly only had a list of four ingredients and no instructions.

But the hardest recipe to create, she said, was the health-healing Yeto’s Soup from The Legend of Zelda: Twilight Princess.

“That had no real-world equivalent,” she said.

She ended up going with a thick soup that includes goat cheese, salmon and pumpkin.

Ignoring the clever inspiration for the recipes, the book still offers a collection of food one could grow to love to cook and eat. And that’s deliberate, Green said. The book wasn’t meant to be a gimmick.

“That was very important to me,” she said. “That was a big factor. There could have been recipes that were cute, but that you’re not going to want to eat all of the time. As much as I loved the idea of including things like that, it wasn’t practical.”

The book also includes quite a few cooking tips, and by walking readers through the process of creating the meals, it makes cooking approachable as possible.

To ensure she was achieving that goal, Green said she cooked each recipe five to 10 times and even sent them off to friends to see how they would do.

Green’s immediate plans for the book include bringing it to other platforms, including Kindle, Nook and Android, and perhaps even printing it.

Once that’s done, Green said, she might consider creating a follow-up.

“I’ve been talking about a sequel that would be more intermediate and a third cookbook that is hard core,” she said.

The idea is that the books could sort of level up the readers’ cooking skills over time.

For now, though, Green is happy with how things are going. She’s even heard from one of the creators of a game she pulled a recipe from.

Hidetaka “Swery65” Suehiro of Deadly Premonition fame was shown an advance copy of the book, and the sandwich his game inspired, last year.

“He was so enthusiastic,” Green said. “He thought it was so great. He loved that I included it.”

(Good Game is an internationally syndicated weekly news and opinion column about the big stories of the week in the gaming industry and its bigger impact on things to come. Brian Crecente is a founding news editor of Polygon.)