As UCLA, USC renew basketball rivalry, both could use a turnaround 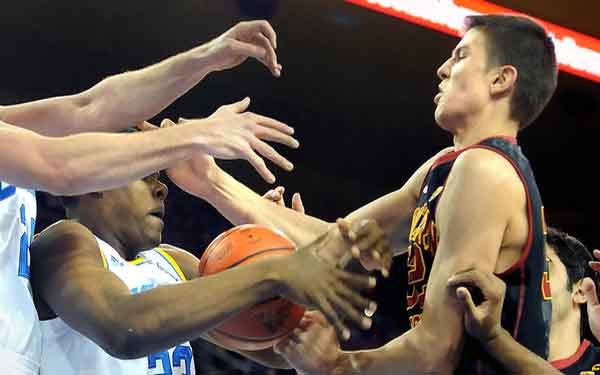 LOS ANGELES—At Pauley Pavilion this season, the loudest cheer at each UCLA basketball game has been for a free frozen yogurt promotion. Across town, at the Galen Center, the crowds at USC basketball games are sometimes not large enough to make any noise.

Recently, ESPN described UCLA’s offense as “like those boring pickup games between players who have never met one another before.” That was nicer than a remark on Grantland, which said UCLA was “a pile of hot manure this season.”

But at least they’re paying attention. Outside of Los Angeles, USC basketball doesn’t get much press at all.

On Wednesday, the Bruins and Trojans will renew their crosstown rivalry, and this time, not much may be on the line. UCLA is 2-2 in the Pac-12 Conference; USC is 1-3. And that’s only after a successful homestand last week, when the two teams combined for three wins. Barring a turnaround, this could be a rare down season for Los Angeles basketball.

“The center of the Pac-12 is Los Angeles,” ESPN basketball analyst and former UCLA captain Sean Farnham said. But he added, “Tucson is the epicenter right now.”

Both teams still sit above .500. Since returning home, UCLA seems to have stabilized after a five-game losing streak that included embarrassing defeats by Kentucky and Utah. And after finishing last in the conference last season, USC and its talented recruiting class have shown improvement.

But neither team cracks the top 70 in the RPI rankings, and so far neither team has shown it can challenge the conference’s best teams. No. 8 Utah, the only team undefeated in Pac-12 play, beat both teams by a combined 56 points.

Farnham, who played for UCLA from 1997 to 2000 and faced mostly strong Trojans teams, said the Pac-12 is at its best when both USC and UCLA are near the top of the conference along with Arizona.

Among recruits in the city, he said, both schools still maintain prestige. But Farnham and other observers note that times have changed.

“Is the UCLA brand at the same point, in 2015, as some of these other traditional powerhouses? No,” said Josh Gershon, a West Coast recruiting analyst for Scout.com. “It’s not the strongest it’s ever been. But it’s also still UCLA. And it’s always going to have a shot with highly touted kids.”

USC’s problem has been a lack of talent. This season, USC Coach Andy Enfield’s second, the Trojans brought in a highly rated recruiting class, but the young lineup has struggled with consistency. The team has just three juniors and no seniors.

Dedrique Taylor, who coaches Cal State Fullerton, the only nonconference team to have played both UCLA and USC this season, said the Trojans now have the athletes required to run Enfield’s up-tempo system.

“To me, they’re elite-level players,” Taylor said. “And I think USC will be something to deal with in the next month, but definitely in the next year.”

“A lot of times people want the quick fix,” Farnham said. “I think the reality is it takes about four years.”

USC may have more patience than UCLA, which has grown accustomed to winning. UCLA Coach Steve Alford is also in his second year but, Taylor said, he has been victimized by his own success last season. After the Bruins won the Pac-12 tournament and reached the regional semifinal in the NCAA tournament, three underclassmen left early for the NBA draft.

In all, the Bruins lost five players from last season’s roster to the NBA or the NBA Development League. One would-be transfer was denied admission, and another recruit was forced to sit for the season after being ruled a partial qualifier.

Taylor was quick to note that UCLA was “clicking on all cylinders the night we played,” when the Bruins won by 28.

And, Farnham and Gershon said, UCLA has re-established recruiting ties in the city.

But for both schools, fans have responded by staying at home. Over nine games, USC’s average attendance has been 3,248. UCLA’s has been 7,101 through 10 games.

Plus, on Wednesday, one Los Angeles team is guaranteed a win.