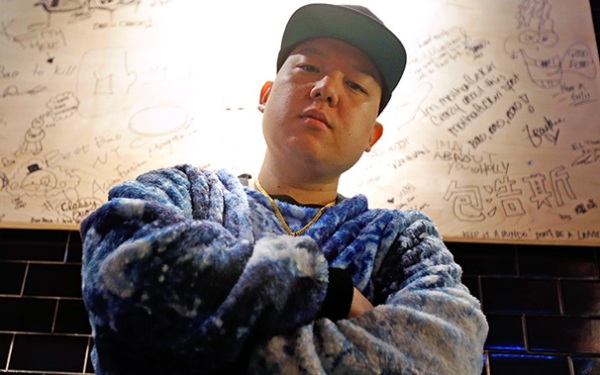 ORLANDO, Fla. — As a young first-generation Chinese-American growing up in Orlando in the 1990s, Eddie Huang felt like he never quite fit in. Huang was taunted at school for being different but firmly challenged racial slurs and stereotypes.

The popular blogger and owner of a hip New York restaurant “never accepted the way people see us (Asian-Americans)” and used the lessons he learned from beloved hip-hop artists as a way to bridge cultural differences. His often-hilarious experiences are the basis for a new ABC sitcom, “Fresh Off the Boat,” which is set in Central Florida and premieres next month.

The show is a takeoff on Huang’s 2013 book “Fresh Off the Boat: A Memoir,” in which he chronicles what it was like standing out in a mainly white Central Florida neighborhood during the 1990s. It is the first network series in 21 years to focus on an Asian-American family. The show is a point of pride in Orlando’s burgeoning Asian-American community.

“A long time ago, you could’ve said that Asian-Americans were stereotyped as Chinese delivery men…always having fake accents,” said Ricky Ly, a University of Central Florida graduate and founder of the college’s Asian Pacific American Coalition. “(But) I think more and more lately there’s been more diverse representation of Asian-Americans…not as stereotypes but just as regular people.”

Ly, a civil engineer and food blogger whose grandparents moved to Vietnam from China before his family came to the U.S., said Huang’s sitcom will showcase Central Florida’s growing Asian-American community.

“It’s definitely a long time coming,” Ly said of the sitcom. “I think it’s a great step to focus on an Asian-American family. With the cultural aspects of being Asian-American, I think it is great to showcase that on a national level.”

With 42 different ethnic groups, Asian-Americans are the fastest-growing racial group in the South, increasing by 69 percent, even outpacing the growth of Latinos, from 2000 to 2010. In Florida, the increase was 72 percent, according to data released last year. Orange County has Central Florida’s biggest concentration of Asians, who account for 5.4 percent of the population, followed by Seminole at 4.1 percent, Osceola at 3 percent and Lake at 2.1 percent.

“As our population, while still small, continues to grow…we have second generations bringing family over, expanding in that way,” said Gail Rayos, a Filipino-American and president of the Asian American Chamber of Commerce of Central Florida. “It’s a rich history that now others are building on.”

Shally Wong, founder of Asia Trend magazine, a Winter Park-based nonprofit that seeks to promote a broader understanding of Asian-Americans, said many families, including her parents, are attracted to Central Florida’s education opportunities. A native of Hong Kong who moved to Orlando with her family in 1991, the UCF graduate has witnessed the area’s significant demographic shifts.

“We like to settle with the people we know,” said Wong, former secretary of the Asian American Federation of Florida’s Central East Region. “Asians emphasize a lot on family and we work together closely. We like to get referrals by family or by your relatives and that’s always the way.”

Huang moved with his parents and two younger brothers from Chinatown in Washington, D.C., to the Dr. Phillips area, where his father became a restaurateur. “Fresh Off the Boat” is set in the era where 11-year-old Huang tries to make a mark in a community that is sometimes culturally ignorant and unfamiliar with Asian-Americans. Hudson Yang plays the “hip-hop-loving” Eddie.

“I think this show is going to be huge for helping Americans understand us (Asians) and helping us understand Americans,” said Huang, 32, who graduated from Rollins College in Winter Park and is co-owner of a highly-regarded Taiwanese restaurant, Baohaus, in New York City. “I think it’s a really big step for me. It’s a really big step for the community to start this conversation.”

Huang, who has co-hosted episodes of Anthony Bourdain’s “The Layover” on the Travel Channel, lives in Los Angeles and New York and visits Orlando during Chinese New Year. His father, Louis Huang, who sold his restaurants, including Cattleman’s Steakhouse and Atlantic Bay Seafood Grill, and mother, Jessica Huang, live in Orlando.

As a producer on the show, he described the joy of watching the pilot episode as “lights out,” adding it is his mission to continually fight stereotypes and break down barriers. The first episode will air at 8:30 p.m. Feb. 4 and repeated at 9:30 p.m. After that, it will move to its regular time slot of 8 p.m. Tuesdays starting Feb. 10.