New issue of Charlie Hebdo sells out in France 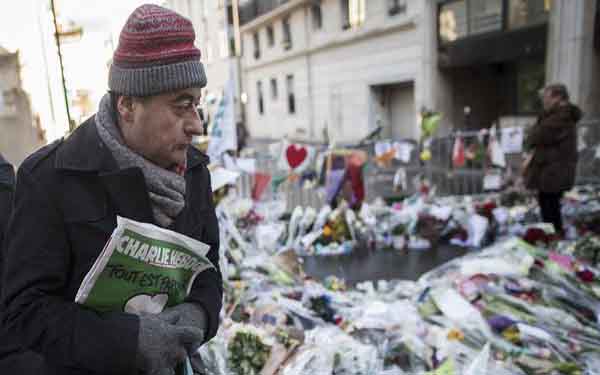 A man holding the new edition of Charlie Hebdo pays his respects in front of a memorial on Jan. 14.
(Credit: Ian Langsdon / European Pressphoto Agency)

PARIS — People made reservations days in advance, lined up before dawn and even so scores were turned away as they attempted to buy the latest issue of the satirical magazine Charlie Hebdo on Wednesday, a week after attacks that killed eight of the magazine’s staff, 17 by weeks’ end, in the worst terrorist attack in Paris in decades.

French Prime Minister Manuel Valls could be seen walking on French television toting his copy of the magazine, but others were not so lucky.

Some stores were mobbed with crowds reminiscent of Black Friday in the United States.

“We don’t have any more!” shouted the owner of a news stand opposite the Port Royal train station as dozens approached looking for the controversial magazine in the 5th Arrondissement.

Like many other newsstands he had opened early, at 6 a.m. He received only 30 copies. By 8:30 a.m. he still had a few of the magazines – but they were reserved for regular customers. He sold them quietly, slipping them into bags behind the counter and allowing regular customers to leave quickly, paying later.

For the other, he pointed to a handmade sign that said “Sorry, no more Charlie Hebdo” in French and promised “Tomorrow.”

Michel Petitjean, 58, a researcher, was among those turned away at 8:30 a.m. – for the third time, he said. He had already stopped at a newsstand that sold out at 6 a.m, and another that had a line of 30 people with copies reserved.

He said he wanted to buy the magazine “to support the staff of Charlie and for liberty.”

“Charlie Hebdo criticizes everything,” he said, “That shouldn’t be a death sentence.”

He said buying the magazine was also a way to defend free speech all over the world not just in France.

“There are countries where they don’t have freedom of expression, even today,” he said as he stood in front of the newsstand.

By afternoon, 27,000 sites nationwide had sold out of the magazine, despite a run of more than 4 million, compared to the usual 60,000. A version was available online, but many said they wanted a copy of the paper and its cover cartoon showing the Prophet Mohammed crying under the headline, “All is forgiven”

Sadli Dahar, 45, a building maintenance worker, was unable to buy a copy and said he planned to read online and try again Thursday. Dahar had seen copies already on sale on ebay for 70,000 Euros.

Dahar, who is Muslim and moved to Paris 25 years ago from Algeria, described himself as a moderate who values Charlie Hebdo as an outlet for the type of provocative speech he was not in a position to make without facing a backlash from the Muslim community which he fleet was “being held hostage by extremists.”

“I couldn’t say it – but Charlie Hebdo could,” he said.

He said the attacks have emboldened him and other moderate Muslims to speak out against extremism.

“They succeeded in provoking a debate, “ he said of the attackers, “What they did was put this back on the table and enable the Muslim community to step up and speak out.”

Martine Blanche, 55, was among the few who managed to buy a copy of the magazine Wednesday at Port Royal after reserving three days in advance.

When she approached the newsstand after 9 a.m., a few people were lingering, and the agent quietly asked her to pass her purse behind the counter, slipped the copy in and told her to pay later, when she picks up her lunchtime copy of Le Monde.

It was the first time that Blanche, who works at a nearby office as a project manager handling French students’ financial aid, had bought the magazine.

“I bought it to support the newspaper, to say we are not afraid and we support freedom of the press,” she said.

She had heard about potential protests in the Middle East in response to the magazine’s cover, but said Charlie Hebdo’s staff should not censure themselves. She had heard a Turkish newspaper reprinted some of the Charlie Hebdo cartoons and called them “very brave.”

“Everybody should,” she said. “It’s a risk, but even if there are risks, we cannot give up. People say it’s a fight, it’s a war. We cannot abandon the freedom of the press.”

At another nearby newsstand in the 6th Arrondissement, the owner had posted a common sign “Pas de Charlie,” and when people stopped to ask, he promised “Tomorrow.”

Andre Mardukh, 65, has run the newsstand for four years, and said he had orederd a hundred copies of the magazine Wednesday, but only received 20.

Newspaper sales here have suffered as elsewhere due to the Internet, and although the neighborhood is wealthy, he said his business has suffered in recent years.

But Mardukh, who is Iranian and Kurdish, said he talks to his customers about the attacks and the broader political situation in the Middle East, that he was flooded with customers Wednesday and expects to have more discussions in coming days.

He was not taking reservations Wednesday, even from regular customers, and planned to open early again on Thursday.