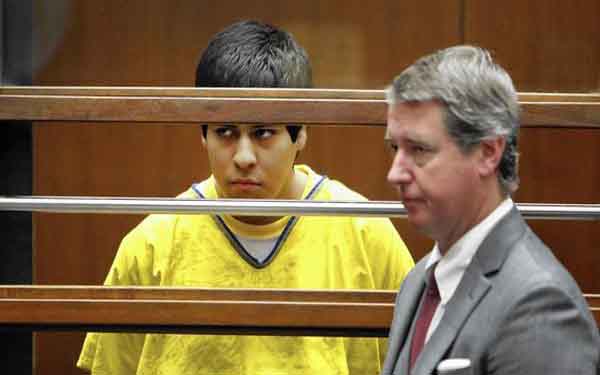 Four teenagers accused of murdering a USC student gave various accounts of the attack in police interviews, but all admitted to singling out a target near the college campus and taking a bat to rob him, according to court testimony.

LAPD Det. Paul Shearholdt testified at a preliminary hearing Wednesday that each of the suspects said the group was roaming near USC looking for someone to "flock" — a term they used to describe robbery — for money.

Andrew Garcia, 19, said he and four friends were in a car driving on West 29th Street just past midnight on July 24 when they saw Xinran Ji walking alone, Shearholdt testified, and they decided that "because he was Chinese he must have money."

Four of the five people in the car were charged with murdering Ji: Jonathan DelCarmen, 19; Alberto Ochoa, 17; Alejandra Guerrero, 16; and Garcia, although his preliminary hearing has been suspended pending a mental competency review. Ochoa and Guerrero have been charged as adults. The fifth person in the car, also a minor, was charged as a juvenile with other counts related to a robbery at Dockweiler Beach.

Ji was left bloodied on the street but managed to get back to his bedroom, where he died.

Louis Pena, a forensic pathologist for the Los Angeles County coroner's office, testified that he found multiple points of impact on Ji's body from a rounded object. Pena said in court that Ji's skull was fractured and his brain stem compressed, causing his body to go into shock.

"In my opinion, he would've passed at some point in time, even if he had gotten to a hospital," Pena said.

Ji spent his final hours at a study group with fellow Chinese students. Just after midnight, he left with a friend and walked her home, LAPD Officer Di Sun said in court Tuesday.

The woman told Ji to text her when he got to his apartment, Sun said, but she never received a message. She called Ji twice, but got no response, Sun testified.