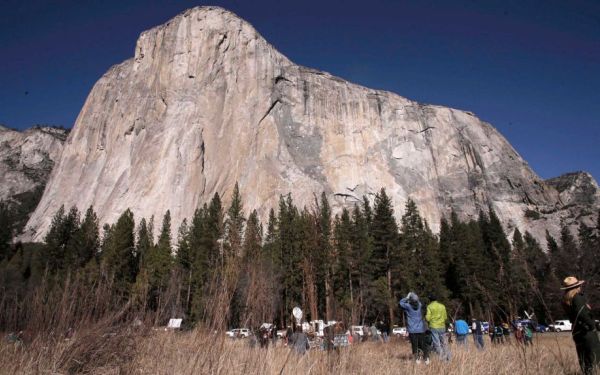 YOSEMITE NATIONAL PARK — Two climbers reached the summit of El Capitan on Wednesday, completing a herculean and what some believed to be an impossible free climb 3,000 feet to the top of a smooth granite cliff known as the Dawn Wall.

Tommy Caldwell, 36, of Colorado and Kevin Jorgeson, 30, of Santa Rosa clambered up the last 400 feet and reached the top of the immense monolith about 3:30 p.m. They were met with shouts, Champagne and hugs from loved ones, who waited for hours in chilly weather under a clear, blue sky.

By nightfall, the two climbers took a back trail, rappelled down 500 feet and returned to the floor of the valley where it had all started 19 days earlier.

“It was a good adrenaline rush,” croaked the nearly voiceless and haggard Caldwell, who, along with wife Rebecca, was greeted near the parking lot by a group of friends and family and another round of hugs and congratulations. He managed several whispered “thank yous” before climbing into a car.

Ninety minutes later, a tired but exuberant Jorgeson made his appearance on the valley floor, holding hands with girlfriend Jacqui Becker. As they walked toward friends and family awaiting them, he and his contingent cheered, “Woo hoo-hoo!” Jorgeson told friends he was headed for a shower: “It’s going to take awhile.”

The pair’s feat earned them a national following and instant fame. President Obama tweeted them a congratulations: “So proud of @TommyCaldwell1 and @KJorgeson for conquering El Capitan. You remind us that anything is possible.”

Obama apparently didn’t get the memo from Jorgeson, who had tweeted Tuesday: “To anyone writing about #dawnwall, this is not an effort to 'conquer.’ It’s about realizing a dream.”

The free climb was the hardest ever attempted. The final push to the top was supposed to be easy, but it turned instead into a grueling trial that tested the two rock climbers’ skill, endurance and will to succeed.

Dozens of spectators watched through telephoto lenses on the valley floor and cheered the pair on throughout the day. It was the 19th day of climbing on the seemingly blank, vertical southeast face of the monstrous hunk of granite that dominates Yosemite Valley.

Media: San Francisco Chronicle One of the men making a grueling ascent of a half-mile of exposed granite in California's Yosemite National Park is now just 1,000 feet from finishing the groundbreaking climb. Some video mute. (Jan. 9)

The technique the men used, free climbing, means they were able to use only their hands and feet to scale the steep wall. Climbing ropes, bolts and other gear were used to catch them when they fell but were not employed to help them scale the rock.

The climb, which began Dec. 27, consisted of 31 pitches — segments between two belay points, where safety ropes are secured to bolts. Each pitch ranged up to 150 feet in length. The men were able to successfully finish the climb after completing seven pitches on Tuesday and four pitches on Wednesday.

The final four pitches were followed closely by spectators in El Cap Meadow, mainly through the steady commentary of photographer Tom Evans, who had set up a telephoto lens to closely monitor them.

“Oh, he just fell,” Evans shouted when Jorgeson’s foot slipped and he had to be caught by the belay rope, forcing him to start the first of four pitches again.

Evans explained that the last 400 feet were no easy task, even for Caldwell and Jorgeson. He said the two climbers weren’t as worried about that portion of the climb and hadn’t practiced their moves there in four years, and it consequently took them longer than expected to climb it.

“It’s not as hard as the lower stuff, but they are so beat-up,” Evans said to a crowd of fascinated onlookers. “Kevin’s hands especially are beat-up. The biggest difficulty now is their physical conditioning.”

The men climbed the hardest parts last week and were completely exhausted. Expert climbers have taken on this kind of difficulty before, but only in short bursts on boulders or in 100-foot sections. Never before has anyone climbed such difficult terrain consistently for two weeks on a big wall for as much as 3,000 feet.

“It’s actually more than 3,000 feet, because a number of pitches go sideways,” Evans said. The hardest pitch on the climb was a straight sideways traverse. It didn’t gain them an inch.”

That traverse was the section halfway up the mountain that Jorgeson fell on repeatedly as he attempted to hold with sliced-up fingers onto a razor-blade-sharp flake. He eventually struggled through after seven days of trying and caught up to Caldwell. The two men were required to go back and do the entire pitch over whenever they fell — which was often — according to the unwritten, but well understood, rules of free climbing.

Nancy Nimmo’s heart was in every hand and foothold as she watched the progress Wednesday. The 66-year-old caterer from Laguna Niguel, in Orange County, had come to Yosemite for a Chef’s Holiday event, but skipped all the festivities the past three days to ooh and aah at the climb from the valley floor.

“This is mesmerizing,” said Nimmo, whose husband, Mark, was next to her in the meadow. “We are hooked. It’s redemptive and mystical and majestic all at once. This rock is probably one of the most holy things ever made, and these men have figured out how to climb it in a way that’s never been done before. Its fascinating, but it’s also so beautiful.”

Caldwell’s mother, Terry, of Estes Park, Colo. — who was also watching from below — said her son’s experience in 2000 when he, his then-girlfriend and two other climbers were taken hostage by Islamic rebels in Kyrgyzstan was a major influence on his desire to climb the Dawn Wall. Fearing they would be executed as the rebels led them toward Uzbekistan, Caldwell shoved their guard over a cliff and they escaped, she said.

“When he first came back, it was very, very difficult, because he thought he had killed somebody, and he’s a very gentle soul, until we found out that the Kyrgyzstan army had picked the man up and he had survived,” said Terry Caldwell. “He sees life in a different way now. He now sees that on the other side of cold and hunger and hardship there is joy. He found that when he pushes himself to his very limit there is joy on the other side.”