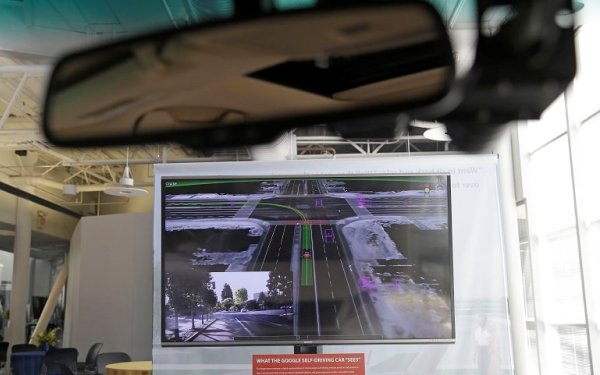 A screen shows what a Google self-driving car sees through the window of one of the cars.
(Credit: AP/Eric Risberg)

A transportation network where cars and trucks no longer need drivers seems tantalizingly close. Google, Carnegie Mellon University and automakers are testing out their own autonomous vehicles. The federal government has started to plan so that vehicles can communicate with each other. But the reality is the country will still have to wait several years before the vehicles leave the experimental stage.

Still, a transportation network where computers pilot vehicles down city streets and highways could radically reshape how states and localities build, manage and govern their roads. Local officials don’t want to be caught off guard by those changes, and several of them discussed the challenges at the Transportation Research Board’s annual meeting in Washington, D.C., this week. Here are some of the highlights of those discussions.

Not all future tech is new

The most effective technology for keeping automated vehicles out of oncoming traffic and on the shoulder is not a camera or GPS maps, even though those are useful, said David Agnew, a researcher for auto parts manufacturer Continental Automotive Systems. The most effective technology is rumble strips along the center line and road shoulders. An accelerometer in the car can easily detect the vibrations from the rumble strips and correct course.

The rumble strips are becoming more common, because they help humans avoid “roadway departures” that lead to 51 percent of U.S. motor vehicle fatalities. But they are far from universal. State highway departments and local governments would still need to make them much more common in order for them to be a reliable way to guide driverless cars.

Many automated cars also use cameras to read road signs, but not all road signs are in great shape. That’s why researchers at the University of Michigan’s Transportation Research Institute are using a wide variety of signs at its 32-acre “mini-city” test facility. Some of the signs are tagged with graffiti; others have bullet holes in them. The researchers want to know how good of a condition the signs must be in for the cars to be able to read them.

Pressure could build to standardize

Speaking of traffic signs: If automated vehicles become popular, people would likely put more pressure on states and localities to standardize their signs, signals and roadways. The differences in signs used by different states in the United States is greater than the variety of those used by different countries in Europe, Agnew said. That makes it more difficult to develop cars that operate well across the country.

Roadside signs are only one example. Michigan, for example, has waiting on buying new traffic signals until it gets a better idea of what will be required to allow those signals to take advantage of emerging technology. The standards for communicating between vehicles and roadways -- so cars will slow down in work zones, or lights will turn green for oncoming traffic -- also don't exist yet.

John Halikowski, director of the Arizona Department of Transportation, said states can take on the job of issuing those standards. In the early days of automobiles, he said, “states described what stop signs are going to look like.”

Often, public officials fear that regulating new technology will stifle it. But when it comes to driverless cars, California found the opposite to be true, said California Department of Transportation Director Malcolm Dougherty. The state issued regulations for autonomous vehicles, and is working on regulations for operators of those vehicles, so that researchers can operate lawfully on state roads while they experiment with new technology.

Highway departments are used to building roads that last for decades, but technology moves so fast that a smartphone that’s three years old is considered obsolete, said John Barton, deputy executive director for the Texas Department of Transportation.

That means that governments may have to rethink the way they pay for technology. In the private sector, customers increasingly don’t own the technology they use, they pay for access to it for a set period of time. They subscribe to Spotify instead of buying albums, or pay a yearly fee to use Microsoft Office on the web instead of installing it on their computers. That may be the way governments pay for technology that allows vehicles and infrastructure to communicate with each other, Barton said.

In fact, a private provider may also be willing to collect, process and analyze the huge amounts of information gathered by those systems for the state for free, Barton said, if they are able to also use it for their own commercial purposes.

People are often wary of vehicles that keep track of exactly where they’ve been and when, which has led to controversies over toll road transponders or pilot projects to tax drivers by the number of miles they drive. So the idea that government computers would know not only where you’ve been, but where you’re going, is sure to raise privacy concerns.

Carlos Braceras, executive director of the Utah Department of Transportation, said governments need to agree soon to a principle that personal location information will not be shared outside of government.

Governments would have try to protect against hackers getting that information illegally as well.

The car you call from your phone might not have a driver, and the vehicle that arrives could be transporting several other passengers heading in the same direction, too, said California’s Dougherty.

Given the recent proliferation of bike shares, it’s possible people would depend on automated vehicles rather than owning cars themselves. If that became a widespread trend, it would have big implications for transit ridership, state budgets, insurance and local government regulations of taxis and rideshare companies.

If machines control vehicles, they would likely be programmed to obey speed limits. The speed limits themselves could change dynamically to respond to traffic and conditions, said Utah’s Braceras. That could lead to much greater efficiency and to safer roads.

Halikowski, of Arizona, mentioned that automated vehicles could also cut down on drunken driving.

If so, the new vehicles could lead to big changes for police departments, especially those that spend a lot of time on traffic enforcement. It could mean less money from tickets going to city coffers, but it would also mean those police could focus on other duties.