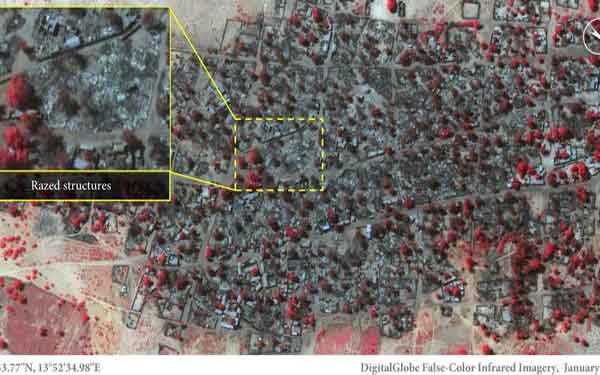 One town, Doron Baga, has been almost wiped off the map, with about 3,100 houses burned down, while 620 houses were set afire in nearby Baga, according to Amnesty International, which released the photographs.

It’s not known how many people died in the attacks by the militants that began Jan. 3. The Nigerian government and a local official have dismissed reports that 2,000 were killed. The area remains under control of the fighters, making it difficult to verify the toll.

Residents who escaped from the fishing towns have described gunmen shooting hundreds of people. Some witnesses said they ran over dozens of bodies as they fled. Others said people were dragged from their houses by the militants and shot.

“In time, we hope to provide more accurate figures on the number of those killed in the attacks and information about them. But for now, credibly used satellite imagery is the closest we will get to the truth,” Human Rights Watch, which also received the images, said in a statement Thursday.

Boko Haram took control of 16 towns and villages in the attacks, which followed the deadliest year in Nigeria’s insurgency. At least 11,000 people were believed to have been killed in 2014.

Amnesty International spokesman Daniel Eyre said the satellite images of the attack around Baga showed “catastrophic” destruction. The organization described the four-day attack as the worst so far by Boko Haram.

“Of all Boko Haram assaults analyzed by Amnesty International, this is the largest and most destructive yet,” Eyre said. “It represents a deliberate attack on civilians whose homes, clinics and schools are now burnt-out ruins.”

Nigerian military officials, who initially endorsed the organization’s suggestions that it was the terror group’s worst attack, later announced that 150 had died, including many terrorists. If true, that would not be the country’s worst terror strike. A Boko Haram attack on the northern city of Kano in January 2011 killed about 180 people.

“Up until now, the isolation of Baga combined with the fact that Boko Haram remains in control of the area has meant that it has been very difficult to verify what happened there,” Eyre said. “Residents have not been able to return to bury the dead, let alone count their number.

“But through these satellite images, combined with graphic testimonies, a picture of what is likely to be Boko Haram’s deadliest attack ever is becoming clearer,” he added.

Eyre said the satellite images raised doubt about the Defense Ministry’s estimate of 150 dead. “These images, together with the stories of those who survived the attack, suggest that the final death toll could be much higher than this figure,” he said.

The United Nations says more than 7,000 people fled the attacks into neighboring Chad and Niger.

Both towns shown in the images are near Lake Chad, where locals caught and traded fish until the terror group’s attacks on roads last year shut down their commerce. Boko Haram attacks have ruined the northern economy, with farmers fleeing their land and traders unable to transport goods as militants hijack trucks and kill drivers.

Survivors of the Baga attack described hundreds of bodies according to Amnesty International.

“They killed so many people,” one man told Amnesty International. “I saw maybe around 100 killed at that time in Baga. I ran to the bush. As we were running, they were shooting and killing.”

“I don’t know how many but there were bodies everywhere we looked,” a female survivor told the rights group.

Another witness said the killers fired indiscriminately, killing small children and a woman who was delivering a baby. The gunmen also rounded up women and girls as prisoners.

Boko Haram stepped up its attacks on northeastern Nigeria last year, sweeping into villages and towns, gunning down traders at crowded markets, burning houses and shops and seizing a vast swath of territory.

It gunned down students in their dormitories and kidnapped hundreds of women and girls, including 276 schoolgirls from the town of Chibok whom the group’s leader, Abubakar Shekau, boasted had been sold off as “slaves.”

The worst hit were those who set up local defense units, known as the Civilian Joint Task Force, many of them determined to defend their towns and villages but armed with old hunting guns, spears and machetes.

Boko Haram has also carried out bombings in towns and cities as far south as the capital, Abuja. The militants have lately used girls as suicide bombers, with explosives strapped to their bodies under their flowing Islamic dress.

The group, which is fighting to impose a strict interpretation of Islamic law across northern Nigeria, also declared its territory a caliphate, following the example of the Islamic State in Iraq and Syria.

Nigeria faces elections next month, but poor security in the northeast means balloting is unlikely to be held in that region.