Dick ‘Poop’ is just happy to be nominated for Mr. Turner 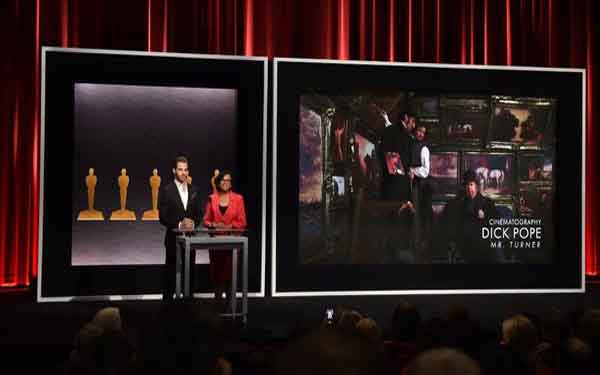 It’s been a crappy morning for Dick Pope.

Well, sort of. The 67-year-old Briton received an Oscar nomination for his cinematography on “Mr. Turner,” marking the second time in his career he’s been recognized by the Academy of Motion Picture Arts and Sciences.

Though that news was obviously cause for celebration, the nod was instantly overshadowed when Academy President Cheryl Boone Isaacs made an unfortunate gaffe while announcing his name: She called him Dick Poop.

The slip-up instantly went viral, the Twittersphere giggling with scatological glee. Not that Pope had any idea. For one, he was on a private tour at London’s Tate Museum, to which artist J.M.W. Turner, the subject of the movie, bequeathed all his work. He’s also never been on Twitter and said he doesn’t “know what ‘trending’ is.”

He said he eventually glanced at his phone and saw that his friends had been sending him messages for hours. And he was surprised that Isaacs’ flub had become such big news.

“If that’s what people talk to each other about on (Twitter), I would never be on it,” he said. “Not if that’s the level of intelligent conversation.”

That said, Pope did have a sense of humor about the incident.

“I’ve been called a lot worse in my time,” he said with a chuckle. "It doesn’t bother me in the slightest. But the poor president of the academy must feel terrible about making the slip-up. It was 5:30 in the morning.”

Of course, the mistake also served to shed light on Pope and “Mr. Turner,” Mike Leigh’s film about a prickly naturalist painter struggling on both personal and professional fronts. Pope and Leigh have been collaborators for more than two decades, working together on 11 films. But the filmmaker is usually the one who gets the lion’s share of the attention.

“It’s usually about the actor or Mike, so we’re both pleased that we have been recognized for our work behind the camera,” Pope said. “We hit it off when we first met and that’s never really changed. I suppose we’re two very like-minded individuals — our outlook on life, politics.”

In approaching “Mr. Turner,” the two aimed to show the world through the artist’s eyes — including the breathtaking landscapes he chose to paint in. Filming took place in England and Wales and the scenery ended up looking so vivid on screen that Pope said he’s often asked whether the backdrops were created with CGI.

“The sky, the sun setting — it was all for real,” he said. “Mike and I really studied what we were going to shoot. Nothing was by chance, though we did have a few fortunate moments with light.”

As for the Oscar ceremony, Pope said he’s looking forward to attending with good friend and fellow cinematographer Roger Deakins, who was nominated this year for his work on “Unbroken.”

“Wild horses wouldn’t stop me,” he joked. And what if a nervous presenter mispronounces his name yet again?

“It’s not that difficult of a name to get right,” he said. Though he did note before hanging up the phone: “Careful what you call me.”