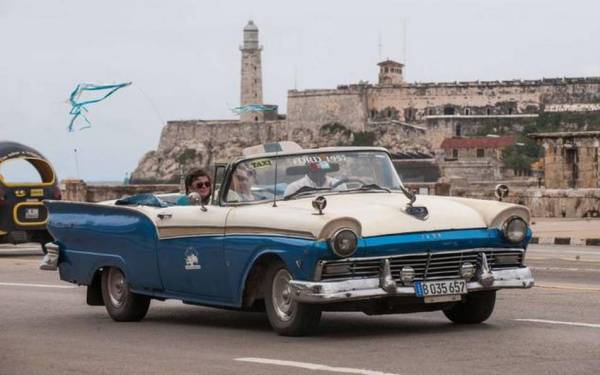 This January 8, 2014 file photo shows tourists as they travel in a taxi, in Havana.
(Credit: Yamil Lage/AFP/Getty Images)

BOGOTA, Colombia — Starting Friday, travelers can go to Cuba to mount exhibitions, run marathons and check out Havana’s growing restaurant scene — all without having to apply for a license. But there’s one thing they can’t do: commit acts of tourism.

Under the regulations announced by the U.S. Commerce and Treasury departments Thursday, individuals who meet a dozen broad categories will no longer have to apply for travel permits. Instead, the U.S. government will be relying on a sort of honor system — where travelers will self-certify that they are, indeed, qualified to travel.

In practice what it means is that more Americans than ever will start trying to book trips to the communist island, which is closer to Miami than Disney World, closer to New York than Los Angeles, and has been virtually off-limits for half a century.

“This is the most exciting news we’ve heard ever since we started doing this 15 years ago,” said Tom Popper, the president of Insight Cuba, which takes U.S. visitors to the island on what are known as people-to-people exchanges. “It’s a huge change and a positive development for Cuba and a positive development for U.S. and U.S. business interests.”

Under the rules, people can travel to Cuba for 12 broad reasons including athletic events, professional research, religious activities, import-export businesses, humanitarian projects and exhibitions among others.

What visitors still can’t do is drink Cuba Libres on Varadero beach or engage in other forms of blatant tourism, which is banned by law — and therefore out of reach of President Barack Obama’s decree powers.

Even so, White House press secretary Joshua Earnest on Thursday called on Congress to end that final obstacle.

“We certainly would welcome congressional action that would make it possible for people to travel to Cuba solely for the purposes of spending time on the beach,” he said during a White House press conference. “Increased contact with the Cuban people and with the Cuban government would only serve to put more pressure on the Castro regime to abide by, protect and even advance the basic human rights that we hold dear in this country.”

Not surprisingly, some are skeptical of the power of such bathing suit diplomacy.

Mauricio Claver-Carone, the executive director of Cuba Democracy Advocates in Washington, D.C, said increased U.S. tourism is bound to fill government coffers. Many of the high-end hotels and restaurants that tourists are drawn to are owned by the military. If the White House had mandated that visitors could only frequent privately run hostels and restaurants, the regulations might not be as problematic, he said.

These new rules “go directly against the president’s own agenda of supporting the Cuban people,” he said. “Instead, they support the Cuban military.”

Among the raft of changes announced Thursday, the U.S. government will no longer set limits on how much a travelers can spend in Cuba and will allow the use of U.S. credit and debit cards.

“We’re closer to the day that U.S. travelers can swipe credit cards, call home and check email, all of which will make visiting Cuba a more relaxing experience,” Collin Laverty with Cuba Educational Travel said in a statement, noting the administration is also encouraging telecommunications and tech companies to cut deals with the island. “The reforms are bound to fuel new employment in both the U.S. and Cuba, and increase the exchange of ideas, information and culture.”

Despite the half-century travel ban on the island, U.S. tourists already abound. Outside the famed Hotel Nacional, where the likes of Walt Disney and Frank Sinatra once sipped cocktails, tour buses are packed with Midwest tourists on their way to visit sugar plantations and art exhibits.

Some arrive as part of educational exchanges run by accredited universities — others are there under informal people-to-people exchanges. Under those visits, organizations licensed by the U.S. Treasury Department can arrange tours that “result in meaningful interaction between the traveler and individuals in Cuba.”

To the layman such activity may seem like a vacation but to the U.S. government the distinction is important. Asked how the government would keep travelers from turning into tourists, officials suggested there might be audits.

“They will have to keep records and documents,” a senior administration official said. “It’s a violation of U.S. law for a traveler to disregard the travel categories.”

Bob Older, the president of Creative Travel, runs people-to-people tours that focus on Cuban cuisine. His groups visit the Havana culinary institute and meet with the chefs of privately run restaurants.

Since Obama began talking about the relaxed travel restrictions in December, Older said his phones had been ringing off the hook.

“The problem is that people think they can fly to Cuba on their own and that’s not the case,” he said. “Yes we are getting a lot of phone calls but the (announcement) has also caused a lot of confusion.”

Under the people-to-people exchanges, visitors must have an itinerary and must be accompanied by a full-time guide, who works for the sponsoring organization and is responsible for compliance. That will make it prohibitive — although not impossible — for individuals or families to organize their own trips.

The new rules kick open the doors for competition by letting any organization lead such a tour, but it also means more travelers, said Popper with Insight Cuba.

Since December, “millions and million more Americans know about the possibility that they can travel to Cuba,” he said. “This is unequivocally the most exciting time for Americans to go to Cuba probably in the history off travel.”