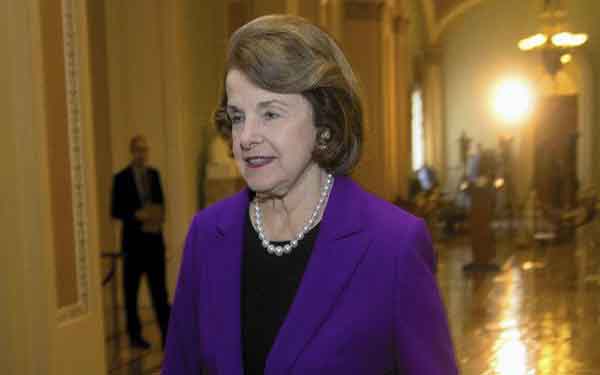 WASHINGTON — As the majority of California voters grow comfortable with the idea of pot legalization, their senior senator in Washington is making it clear that she most certainly is not.

Dianne Feinstein is emerging as one of Washington’s toughest critics of the Obama administration’s tolerance for marijuana use. Long a strident supporter of the government’s War on Drugs, the 81-year-old Democrat is showing no sign of bowing to the shifting views of constituents in California and colleagues on Capitol Hill.

Feinstein’s resolve was on full display in two letters she and Sen. Charles Grassley, R-Iowa, her co-chair on a Senate panel that oversees international narcotics control, fired off this month to the administration.

In dispatches to Attorney General Eric Holder and Secretary of State John Kerry, the senators expressed bewilderment at the administration’s leniency with states that permit the sale of pot to any adult who wants it.

“We are already seeing signs that the United States’ position on drug control issues has been weakened,” they wrote to Holder. “It is our understanding that no one in the Justice Department has initiated a centralized effort to measure the overall effect of these laws.”

The letters warned that legal recreational pot sales appear to violate a United Nations treaty the U.S. signed that is a linchpin of international drug control efforts. They protested that the federal government appears to be doing nothing to monitor the impact in states where recreational sales are underway.

“The administration should account for remarks and policies that send a message of tolerance for illegal drugs,” Grassley said in a statement. Feinstein declined to discuss the letters, which reflect a sentiment that is going out of style back home.

Administration officials said Holder and Kerry will answer the senators’ concerns in writing in coming weeks.

Marijuana for recreational use has been legalized in Colorado, Washington state, Alaska, Oregon and Washington, D.C. Activists are confident that California will join them next year, when its ballot is planned to anchor a multistate initiative push.

Polls over the last 18 months show most California voters favor legalization. Support has reached as high as 60 percent.

The anti-pot role, meanwhile, is not new for Feinstein, who co-chaired the campaign against the 2010 ballot measure that would have allowed recreational cannabis use in California.

Drugs are one of those issues where the famously contrarian Bay Area Democrat has strong convictions that diverge from the thinking of many of her supporters.

Feinstein’s position on pot is in sync with her strident support for law enforcement, dating to her time at the center of San Francisco politics amid the social turmoil of the 1960s and ’70s.

It was then that she sat on the California Women’s Board of Terms and Parole, where she saw that the drug contributed to wrecked lives, she recently told The Associated Press. “I saw a lot of where people began with marijuana and went on to hard drugs,” Feinstein said.

But the legalization proponents who were once infuriated by Feinstein’s anti-pot crusading now treat it as a minor inconvenience.

Coming off a banner year when legalization spread through the West and into the nation’s capital, and Congress passed a historic measure in support of medical marijuana operations, advocates are confident the momentum is with them and not with Feinstein.

“She is still living in the 1980s,” said Bill Piper, a lobbyist with the pro-legalization Drug Policy Alliance. “Everyone we have ever talked to who knows her says she is probably not going to change her views. I still have hope she will come around. You can’t be on losing side of history forever. But maybe she intends to be.”

US News
Prolonged social distancing would curb virus, but at a high cost
228 views

US News
What we know about Mark Riddell, a test-taking whiz linked to college cheating scam
575 views

US News
California gunman was ex-Marine who might have suffered from PTSD, sheriff says
973 views

US News
Rates of 3 STDS in US reach record highs CD says
1,071 views

US News
Trump’s tax cut not for everyone: 1 million Californians will owe $12 billion more next year
2,537 views