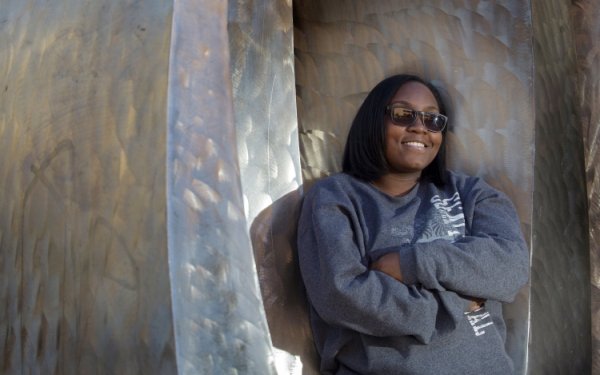 For the first few years at Garfield High School she floundered: “School never really was a super-important aspect of my life. My parents never took interest in my schooling,” said Robinson. “Junior year, it was hard to focus and pay attention at school.”

But with the help of Treehouse, a nonprofit organization founded in 1988 by social workers dedicated to helping foster kids, she got her diploma and is looking to the future.

Robinson, who turns 19 this month, was connected to the organization’s Graduation Success program, which aims to elevate graduation rates of foster kids to the same level as their non-foster peers (currently 75 percent) by 2017.

In her sophomore year, Robinson started meeting weekly with Mike Schloss, an education specialist at Treehouse. Rather than acting as a tutor going over specific coursework, Schloss would act as a coach, going over her goals and figuring out how she could best achieve them.

“From the get-go I could tell that Almeisha really wanted to do well. In particular at school and in life, she was wise beyond her years, very much an old soul,” said Schloss. “She wanted to believe what she said more than anybody but lacked a lot of the confidence in following what she knew what she wanted to do.”

Her dreams are big: She wants to work in the music industry, either as an artist or as an owner of a studio, producing music. A fan of Lauryn Hill and Queen Latifah, she was inspired to get into music by her older brother, an aspiring rapper who was murdered when she was 7. Robinson writes lyrics and poetry, plays the guitar and keyboard — using two instruments she received through Treehouse’s Little Wishes program.

But those dreams weren’t going to happen if she took the same path that her siblings and parents did. Her siblings, she said, “just work. Eight-hour jobs, you know, sometimes more, just trying to make a living. Not like a real career,” she said. “Because they had their kids young, I see how that affected them. They got into drugs and all types of stuff and it’s just like, ‘I see what I don’t want to do.’ It was good role modeling.”

As a foster kid, the odds have been stacked against her.

The youngest child by 27 years, though she grew up with both her parents in the Central District of Seattle, hers was hardly an ideal childhood. Her mother, who has been clean for several months, struggled with alcoholism, and the house they lived in was a classic hoarder’s home.

“With her being an alcoholic, with no one actually doing anything, you just settle. So over the years it just got worse,” said Robinson. “It was unlivable.”

When Robinson tired of the disarray in her home life, she hatched a plan: She’d stay with her aunt who lived nearby until her parents cleaned up the house. But before the first day of her freshman year, Child Protective Services had decreed she could not return home.

The first day of freshman year, an exciting moment for most teenagers, was one of uncertainty for Robinson. A year at her aunt’s turned into five.

It is precisely this sort of uncertainty that contributes to the high dropout rate of foster children. Said Schloss: “If they are not attending school or their grades are low, or if they don’t have enough credits, if they are not connected to their communities or schools, the dropout rate goes through the roof.”

Robinson was in danger of meeting the same fate.

“My main focus was my parents and which, honestly, as a kid it shouldn’t have been, but my main focus was like, wanting them to do what they had to do so I could go back home with them,” she said.

But around her junior year, she had a realization that she might not get to do the things she wanted. She was short a credit to graduate, and she wasn’t doing so well in subjects — like math and science — that were needed to finish school.

“We started to take the longer look, of, ‘What do you think you are gonna need to be an owner of a business?’” said Schloss. “She was able to start connecting her high-school graduation to her goals; she really was able to start to see how some of those classes she didn’t like, like math and science were necessary for her to get what she wanted. And when she started making those connections, I think it started to really click for her that she was getting in her own way by not doing well in those classes.”

“He always uses metaphors, you know?” she said of Schloss. “So he used the buffet kind of example. If you get there late, all your options start to run out because the food’s gone. So if you want the good choices, you’ve got to get there early.”

Her senior year, she ramped up her meetings with Schloss: She took an online class to make up the missed credit (paid for by Treehouse) and concentrated on the classes she had a harder time with.

By the end of her senior year, she had done many of the same things that nonfoster kids did and more: She’d gone to the prom (with her ticket purchased by Treehouse), attended her graduation ceremony (cap, gown, and yearbook paid for by Treehouse). She’d not only graduated but had been awarded the Governor’s Scholarship, an award for foster students in Washington that grants up to $4,000 annually to college education.

Now, Robinson is in the midst of her first year at college, attending Seattle Central College, taking classes in math, English and — of course — music.