By Bruce Siceloff and Adam Bell - The Charlotte Observer (TNS) 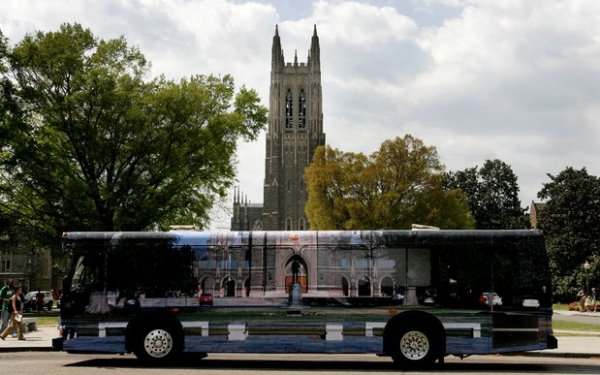 DURHAM, N.C. — In the face of protest from conservative Christian evangelist Franklin Graham and other critics, Duke University on Thursday dropped its plan to let Muslim students chant a weekly call to prayer from the Duke Chapel bell tower.

“Duke remains committed to fostering an inclusive, tolerant and welcoming campus for all of its students,” Michael Schoenfeld, vice president for public affairs, said in a news release. “However, it was clear that what was conceived as an effort to unify was not having the intended effect.”

Members of the Duke Muslim Students Association hold public prayer services at 1 p.m. each Friday in the Duke Chapel basement. Duke announced Tuesday that starting Friday the students would make a “moderately amplified” call to prayer — a chant called the adhan — from the bell tower of Duke’s iconic Gothic chapel.

The next day, Graham, head of the Christian relief organization Samaritan’s Purse and the Billy Graham Evangelistic Association, called on Duke donors and alumni to withhold support from the school until the policy was reversed.

“As Christianity is being excluded from the public square and followers of Islam are raping, butchering, and beheading Christians, Jews, and anyone who doesn’t submit to their Sharia Islamic law, Duke is promoting this in the name of religious pluralism,” said a post on Graham’s Facebook page.

But Christy Lohr Sapp, the chapel’s associate dean for religious life, said religious pluralism is at the heart of Duke’s mission, and the decision to allow the adhan to be chanted from the bell tower reflected that.

In a News & Observer op-ed piece published Thursday, Sapp said the university’s Muslim community is a peaceful and prayerful one — the opposite of how Islam is seen on the nightly news.

“This face of the faith will be given more of a voice as the Duke Muslim community begins chanting the adhan, the call to prayer, from the Duke Chapel bell tower on Fridays beginning tomorrow,” Sapp wrote before the tower plan was canceled.

The adhan is traditionally called out from the minaret of a mosque five times a day to summon Muslims for worship. Before Duke announced its change of heart, Imam Adeel Zeb, the campus Muslim chaplain, said that allowing the chant to be called from the bell tower of a Christian church was a welcome gesture toward religious and cultural diversity.

“The adhan is the call to prayer that brings Muslims back to their purpose in life, which is to worship God, and serves as a reminder to serve our brothers and sisters in humanity,” Zeb said in a statement.

Schoenfeld said that members of the Muslim community will now gather on the quadrangle outside the chapel. A Duke spokesman said the students will chant the adhan there, on the ground, before moving to the chapel basement for their prayers. He said he did not know whether the chant would be amplified.

In an interview Thursday with The Charlotte Observer, Graham said Duke should not allow the chapel to be used for the call to prayer.

“It’s wrong because it’s a different god,” Graham said before Duke announced its decision to move the adhan out of the tower. “Using the bell tower that signifies worship of Jesus Christ, using (it) as a minaret is wrong.”

Graham did say Muslim students should be allowed to worship on campus. “Let Duke donate the land and let Saudi Arabia build a mosque for them,” he said.

And referencing the recent terrorist attacks in France, Graham added, “Islam is not a religion of peace.”

Duke received hundreds of calls and emails, “many of which were quite vitriolic,” Schoenfeld said. “The level of vitriol in the responses was unlike any other controversy we have seen here in quite some time.”

Late Thursday afternoon, Graham took to Facebook to applaud Duke’s reversal. “They made the right decision!” he wrote. As of 6 p.m., this comment had attracted 23,332 “likes.”

Banawan said it is wrong to criticize an entire group over the actions of a small number of extremists, no matter what their religion.

Duke’s original announcement, and Graham’s denunciation, quickly made international news, with stories on such websites as CNN, Breitbart.com, The Huffington Post and the Daily Mail in the United Kingdom.

Another wrote, “Today I am thankful to be an alumna of Duke and proud of their continual efforts in supporting all expressions of faith on their campus.”

Duke University was created in 1924, an expansion of what was then Trinity College. Duke’s primary religious affiliation is with the United Methodist Church, but the school officially is non-denominational.

More than 700 of Duke’s 15,000 undergraduate and graduate students identify as Muslim. Duke hired its first Muslim chaplain in 2009, the same year it created the Center for Muslim Life at the university.

“Our Muslim community enriches the university in countless ways,” said Schoenfeld. “We welcome the active expression of their faith tradition, and all others, in ways that are meaningful and visible.”

The initial announcement Tuesday was originally illustrated with the photo of a member of the Muslim Student Association standing in the bell tower high over Duke’s West Campus, microphone in hand, rehearsing the call to prayer. Duke University erased the photo from its website Thursday evening.