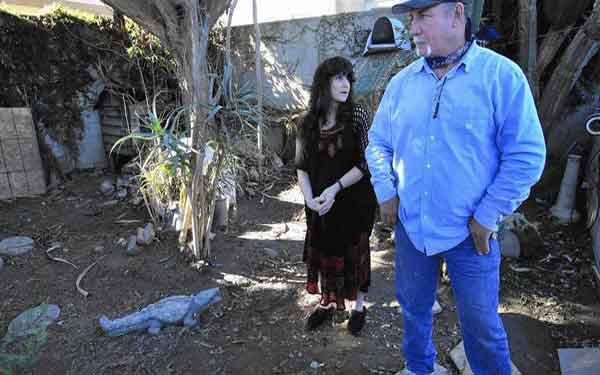 For Laura Mattson, Jaxson the alligator was an 8-foot-long link to her late husband, who adored the reptile he brought home from a Los Angeles pet store 37 years ago.

Jaxson was Jim Mattson's "pride and joy," said his brother-in-law, Ron Gorecki. When the alligator was small, she lived in the house and sat on Jim's lap when he watched TV.

After Jim died in 2012, even though she knew she would have trouble taking care of Jaxson solo, even though she put out feelers to try to find the alligator a new home, Laura Mattson, 59, may have found it hard to let go.

That could be part of the reason she didn't own up to having an alligator on her Van Nuys property the first time animal-control officers came knocking last August, after they got a call from someone in the neighborhood. Mattson let the officers look around, but their search came up empty.

On Monday, they showed up again, by surprise. This time, she wouldn't let them in. So they returned with a search warrant and in the backyard found Jaxson in a wooden crate covered with leaves and other debris.

The alligator was removed from the property by staff from the L.A. Zoo, where she is now in a quarantine facility, according to zoo spokeswoman April Spurlock. The zoo already has another famous alligator, Reggie, who was taken there in 2007 after eluding captors for nearly two years while living in Lake Machado in Harbor City.

"It's in a better environment," Cmdr. Mark Salazar of the city's Animal Services Department said of Jaxson's new home.

Jaxson had to be removed, Salazar said, because it is illegal in Los Angeles to keep wildlife without a permit, and the Mattsons did not have one.

They could not, in fact, have obtained a permit, because alligators are a restricted species in California and can be owned and used only for scientific and educational purposes, said Janice Mackey, a spokeswoman for the state's Department of Fish and Wildlife.

He said that the carcasses of two cats were also found in Jaxson's crate and that neighbors have been asked to report any small pets that disappeared over the last 37 years.

But Mattson, who also takes care of feral cats and has tortoises, insisted such fears were unwarranted and said Jaxson lived on a diet of raw chicken and hot dogs.

Jaxson wouldn't touch rats, she said, let alone cats. As proof, she showed off a photograph of the reptile basking in the sunlight with two kittens, one nuzzled right up against her.

Gorecki said neighbors were aware of the alligator.

"Everybody knew Jaxson," he said. Even when she would bellow a mating call, making the floor vibrate and surely audible to neighbors, nobody ever mentioned it, she said.

Her family never had problems with Jaxson, Mattson said. The alligator always was docile.

"When we first got her, we had a cage in the bedroom for her, and then when she got bigger, she was in the bathroom by the bathtub so she could be by the water."

Later, when they moved her outside, they got her a kiddie pool. When she outgrew that, about 10 years ago, they had a pond custom-made for her, Mattson said, adding that her pen, which she shared with the cats and tortoises, also was custom-made and that the box she slept in was heated.

At first, when Jaxson grew too big to stay in the house, she had trouble getting used to the new outdoor arrangements, according to family members. Sometimes she would use her jaws to open the screen door and find her way back to the bathtub.

She would sometimes come to the back door when she was hungry and wait there to be fed, like a dog, Mattson said.

News of Jaxson's capture had people in the neighborhood talking. Some have suggested that Mattson, who was known for feeding feral cats, did so to lure them to her alligator. Others now are charging her with the deaths of pets who disappeared.

"You're going to blame 40 years of missing pets on the alligator? I think that's preposterous," said Abigail Jaye, a friend of Mattson's, who lives across the street. "Every time I saw it, it was inert."

As she spoke, one of her own three cats pawed on the door to be let outside.