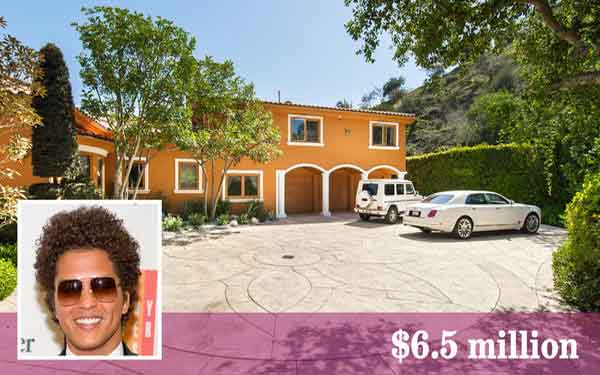 Grammy-winning singer Bruno Mars has spent $6.5 million for a tricked-out two-acre estate in Studio City, The Times has confirmed.

Set in a gated foothill community in the Fryman Canyon area, the Mediterranean-style house was built in 2000 and takes in the canyon, city and mountain views.

The recently renovated interiors include high ceilings, bay windows and elaborate arches and moldings. Some 9,033 square feet of living space contains a two-story rotunda entry, a den, a family room with a wetbar and a wine cellar.

The master suite features a fireplace, a sitting room, an office, dual walk-in closets, steam and dry saunas and a coffee bar for a total of seven bedrooms and eight bathrooms.

The heavily wooded lot has a heated cabana with a covered lounge, an infinity swimming pool with a spa, a children’s playground, city and mountain views and expanses of lawn. There’s parking for 12 vehicles.

Mars, 29, was named artist of the year last year by Billboard. His albums include "Doo-Wops & Hooligans" (2010) and “Unorthodox Jukebox” (2012), which won a best pop vocal album Grammy. His current hit single is “Uptown Funk!”

The property previously sold in 2013 for $5.7 million reported Real Estalker at Variety, which broke the news of the sale.