‘Pale Emperor’ ushers in the return of Marilyn Manson 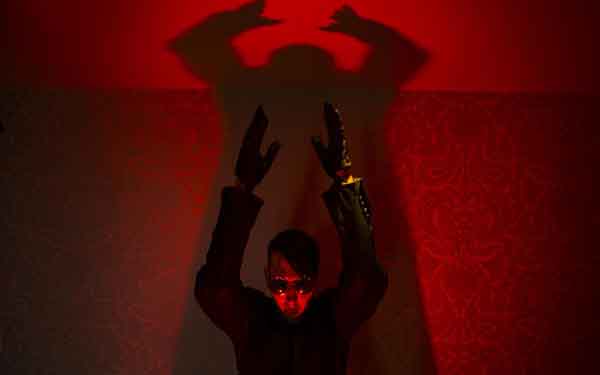 Around 8 p.m. on a recent Wednesday night, in a candlelit, marble-plated West Hollywood hotel room, Marilyn Manson reached into his pocket and flicked open a switchblade.

“The Roman Emperor Constantius was referred to as the ‘Pale Emperor.’ He liked to dress up as a woman and (torture) men and have them dance for him,” Manson insisted. “I identify with that petulant pursuit of chaos.”

Manson’s blade (and his own rows of metallic teeth) glinted gold in the candlelight. For a moment, it seemed like he might actually be pondering something sinister. Instead, he looked down at the knife and grinned. “I prefer using this to eat oysters.”

Nearly 20 years after his 1996 album “Antichrist Superstar” made him America’s most infamous musician, Marilyn Manson still has the power to unnerve. In person, however, he’s also droll and self-aware, prone to knife-twirling goofiness and Southern-gentleman affectations.

What’s even more startling is that, at 46, he just made one of the best albums of his career.

“The Pale Emperor,” released this week, is a 10-song LP that’s just as quick and ferocious as his switchblade. The album largely sheds his trademark industrial-music howl, replacing it with slinky, glamorous brooding that evokes goth-punk pioneers like the Birthday Party and Christian Death.

After his widely praised acting on “Sons of Anarchy” (where he played a white supremacist gang leader) and a cameo on “Eastbound & Down” (where he played a schlub in orange shorts and a moppy brown wig), Marilyn Manson may be preparing for a new role: as a musician at the unexpected height of his powers.

As befits his imperial album title, Manson doesn’t really have conversations. He holds court. Within minutes of sitting down on his suite’s couch, he’s already gone over the repulsion he still feels toward his home state of Florida, ancient Chilean astronomical discoveries and how he finally buried the hatchet with his longtime ‘90s rock adversary, Billy Corgan. He was especially giddy over a recent gift from a friend, a copy of Goethe’s “Faust” that he said was “once owned by a very unsavory character, a German’s personal copy.”

Did he mean Hitler? “I think you can figure it out,” he said, affecting a cryptic flair.

“The Pale Emperor” comes after probably the most difficult stretch of his career. After his then-label Interscope Records released him from his contract (a move largely attributed to slow sales of his 2009 album, “The High End of Low”), his relationship with actress Evan Rachel Wood ended, and 2012’s “Born Villain” didn’t revitalize his career as hoped. His once-sinewy frame began to soften from drinking, drugs and age.

Some of the hardest moments came, he said, when his mother died during the making of “The Pale Emperor.” Even for someone as death-obsessed as Manson, when he talks about her, he curls into the couch a bit.

“It’s inevitable, I know, and I made my peace with her a few years ago when she was no longer aware of who I was,” he said. In the record’s liner notes, he dedicates the album to her, following her dementia-related death in 2014. “My father drove from Ohio to California to see my show on Halloween, I didn’t understand why he drove, but he later told me he was spreading her ashes on Route 66.”

Two unanticipated new relationships changed his outlook on songwriting. The first and more personal one, with the photographer and fellow goth-complexioned muse Lindsay Usich, brought him a more stable (by Manson standards) home life. The second, with producer Tyler Bates — the film composer behind scores for Hollywood action romps like “Guardians of the Galaxy” and “300” — helped him re-imagine what Marilyn Manson could sound like.

“He is a living performance-art experiment. He is a school bus full of children perched on a ledge, and you can’t look away,” Bates said. “There aren’t a lot of real rock stars left, and he’s one of them.”

The two met on the set of the Showtime series “Californication,” where Manson was playing himself. Bates started recording with him as a casual, friendly collaboration, to get Manson’s head back in the game. But the sessions (often starting with just a microphone, a digital kick drum and Bates playing guitar) soon yielded an unprecedented new sound for both of them.

“He really gave himself over to a process unlike any other for him so far,” Bates said. “For me, writing music for film is listening to the story and writing for character roles. This was a really different project, but I applied that same idea to working with Manson.”

The end result is a record that is the best possible way to imagine Manson staring down 50. The self-anointed “Mephistopheles of Los Angeles” takes the open post-punk space of Siouxsie and the Banshees and adds a heavy drum swing and vocal wails that seem to come straight from the back of the Bronson Canyon caves in the Hollywood Hills. The single “Third Day of a Seven Day Binge” rides a grime-caked bass line into a lament about (or maybe an ode to) imminent self-destruction.

“A lot of people say the record has a blues sound to it, but ‘blues’ goes to a few core things,” Manson said. “It’s actually quite Faustian, with (legendary bluesman) Robert Johnson selling his soul to the devil. So there were a lot of strange parallels on this record, like a snake eating its tail.”

It won over Tom Whalley, the former chairman and CEO of Warner Bros. Records who had worked with Manson during his time at Interscope in the ‘90s. Whalley is releasing “The Pale Emperor” on his Loma Vista imprint, where more polite acts like Spoon, St. Vincent and Rhye now count the “Beautiful People” singer as a label mate.

Initially, a new Manson album “wasn’t something I was chasing,” Whalley admitted. “It felt like longshot for me to be interested in it, and his last few records weren’t really up to his past standards. But I heard the songs, and I was beyond impressed.”

He knew they’d have a difficult job convincing skeptics that Marilyn Manson was really, truly back. Sure, Manson’s core audience will always give him a fair shake. But the harder part, Whalley said, was “how to get people who wouldn’t think they’d like it to open up to listening. We’d play his music for our other acts and their teams, and all of them would say, ‘Oh, my God, I like it. I never thought I’d like a Marilyn Manson album in today’s world.’ That’s part of why people are intrigued with this — he’s a living, breathing rock star who has found a fresh moment.”

How that fresh moment will play out commercially is anyone’s guess. Between the current ‘90s revival in fashion and music and an affection for occultish, drugged-up aesthetics across hip-hop and underground music, it’s an appropriate time for a Manson revival. When Kanye West released his stomping 2013 single “Black Skinhead,” many fans falsely assumed it was based on a sample of Manson’s “The Beautiful People,” and they found the prospect enticing.

Whalley doesn’t reasonably expect to sell much more than half a million records worldwide. But by comparison, it took “Yeezus” seven months to go platinum. “The goals are to have an impact, period, which can mean many different things. (Fans) watch the videos and stream his songs millions of times, the social media engagement is incredible — the music will have (a) reach far beyond commercial sales.”

As Manson’s assistant, a beefy fellow with a shaved head, finally beckoned him off to other obligations, the singer invited this writer to pick the chat back up at his house later that weekend.

“We’ve already had this conversation a million times over. Maybe that’s what deja vu is — it’s just us hearing our echoes from a long time ago,” he said. Then, he wrote down a number on hotel stationery. “This is my cell. Come by, and we’ll get some eightballs and strippers and have a long night.”

He was probably joking. Was he?

The phone number turned out to be for an unknown Uber driver with an automated reply message. Maybe Manson was yanking this writer’s chain. Maybe he’d found a side gig as a part-time town car driver. Whatever the case, as the door to his hotel bedroom closed, Marilyn Manson once again slipped off into the night.