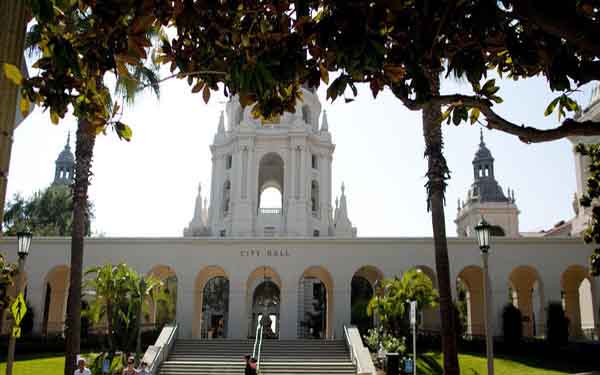 Boyer declined to comment on the direct cause, but he confirmed that the firings were related to the embezzlement scheme.

Former Pasadena employee Danny Wooten and two friends were arrested in December and are accused of embezzling at least $5 million from Pasadena coffers over the course of more than a decade.

Wooten, 51, worked in the public works department, where he allegedly used false invoices and forged signatures to direct millions to churches he was affiliated with and bank accounts under his name.

Pasadena officials alerted authorities last May after they discovered $6.4 million in unauthorized payments from a fund that was supposed to pay for placing utilities underground.

City officials have not been able to track where the money went, and they are considering filing civil suits to recover the money.

Wooten and his friend Tyrone Collins, 55, are in custody and have pleaded not guilty to multiple charges related to the embezzlement. A third person charged in the case, Melody Jenkins, 46, pleaded not guilty and was released on bail.

Green and Foster both presented lengthy Powerpoint presentations full of proposed and adopted  policy changes at a Jan. 5 council meeting called to address the embezzlement charges. Four other employees have been placed on paid administrative leave until the city can investigate the charges fully.

Foster was hired by Pasadena in 2011 after working under current Pasadena City Manager Michael Beck in the city of Riverside, where Beck was then working as an assistant city manager.  Green was hired in 2009 after serving as a finance director in San Bernadino, Rialto and Reno, Nev.

Beck made the decision to fire both employees, Boyer said. Beck did not immediately return calls for comment Tuesday afternoon.

In a letter to city employees, Beck called the decision to fire Foster and Green "difficult, and called their terminations necessary to meet the city's "organizational needs."