Clippers’ Rivers has faith in starters 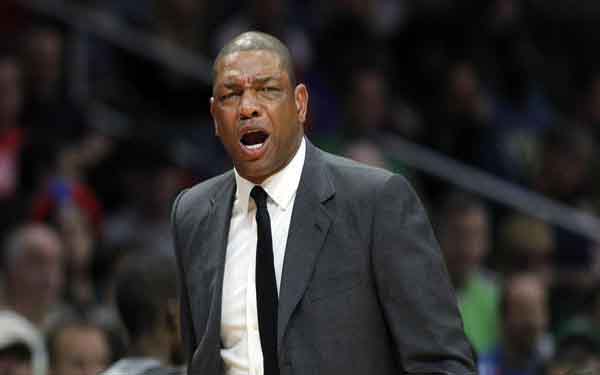 Clippers Coach Doc Rivers reacts to a referee's call during the first half of a game Jan. 19.
(Credit: Alex Gallardo / Associated Press)

LOS ANGELES—Whether the Los Angeles Clippers win convincingly or lose inexplicably, Doc Rivers keeps saying he likes his team. The coach has repeated the phrase so often it could be considered an unofficial mantra.

One reason for Rivers’ optimism despite uneven results this season is a starting lineup he says matches up well with anyone’s in the NBA. It also doesn’t hurt that the starters’ importance will be magnified once the playoffs start and playing rotations are shortened.

“When you look at our five against everybody else’s five,” Rivers said Monday, “they’re as good or better. And you know, in the playoffs you’re not playing but eight (players) anyway.”

The Clippers have two of the league’s top players in point guard Chris Paul and power forward Blake Griffin to go with a defensive menace in center DeAndre Jordan, one of the league’s better sharpshooters in J.J. Redick and a resurgent small forward in Matt Barnes.

For those more comfortable with traditional statistics, the Clippers’ starters ranked first in field-goal percentage (50.2), second in assists (18.0 per game), third in turnovers (8.0) and fourth in points (75.6) and rebounds (30.8).

Barnes’ recent play has been particularly encouraging. He has experienced a progressive uptick in points and rebounds each month this season, averaging 13.3 points and 4.9 rebounds in January while shooting 50.6 percent.

“He’s healthier, he’s feeling great, he’s just playing harder, better and with more confidence,” Rivers said. “He had a pretty tough start and it takes a while to get out of that when you go into a little slump and even though you shoot yourself out of it, it’s still in your mind that it was there and I think he’s out of it now.”

Teams have recently made a habit of intentionally fouling Jordan late in games, with mixed success.

Jordan missed a combined six of eight free throws in those situations against Sacramento and Boston, but the Clippers won both games.

Rivers sat Jordan the game’s final 4 minutes 22 seconds against the Kings and subbed him out until there were less than two minutes left against Boston because the Clippers would have been awarded two free throws and the ball had they intentionally fouled Jordan at that point.

Rivers said he would continue to assess whether to remove Jordan from games. Jordan is making 39.9 percent of his free throws this season.

“He knows and I know going into every game that it’s a decision every night that I’m probably going to have to make,” Rivers said.

Said Jordan: “It’s Doc’s decision, whatever it may be.”

Point guard Austin Rivers made his first basket as a Clipper against Boston, scoring on a twisting, one-handed layup in the second quarter.

He went on to miss his other two shots and is now one for 10 in three games, but his offense wasn’t the primary reason the Clippers wanted him as Paul’s backup. Rivers continued to be assertive on the defensive end and had more assists (three) than turnovers (two) against the Celtics, providing a steady presence running the offense.

There was another upside to the acquisition, according to Austin’s father.

“Honestly, that’s one of the reasons for the Austin (trade), was his size,” Doc Rivers said, “and now we have to try to shore up a couple of more spots on our bench, but I like where we’re headed.”