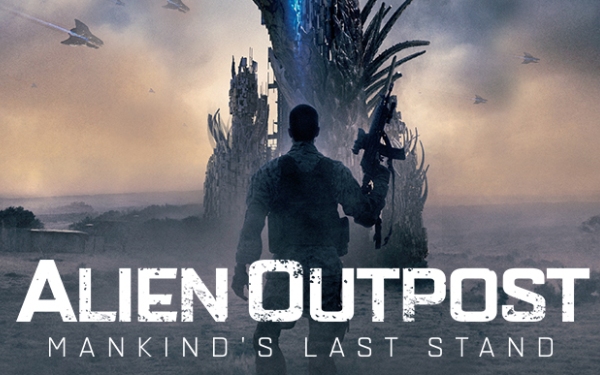 They invade. They destroy. They retreat, only to leave behind a few of their own in their haste. So, when the war is over, what do we do with them? Perhaps if they were of this world that would be an easier question to answer, but when your enemy’s home is light-years away, extradition becomes a bit trickier.

For his directorial debut, Jabbar Raisani ambitiously immerses himself into the landscape of a World War III that reaches past our own planet and into the unknown territories of the galaxy. While our TVs are saturated by the atrocities of mankind, Raisani’s take becomes a refreshing reframing of our perception of enemies and allies. Throw in a little sociopolitical flare of District 9 (2009), and a dash of high-concept action of Transformers (2007), and you get Alien Outpost, an entertaining, thought-provoking take on alien warfare, or more poignantly, post-alien warfare.

It goes like this: In 2021, aliens, aka “Heavies,” invaded earth and managed to destroy and kill millions of lives around the globe. No city was too big, no town too small—every human being was a possible target. A couple years later, however, after banding together as a planet, mankind was able to weaken the Heavies’ defenses, eventually forcing them to retreat back into the heavens. While it marked the end of World War III, a few troops of Heavies were left behind, and as a result, “Outposts” were created around the world to destroy these last hostile extraterrestrials. Over time, these Outposts have been abandoned and forgotten by the world’s defense organization, but there are two documentarians who are brave, or stupid enough, to go and find out what really happens at these Outposts, and what better place to start than the most dangerous of them all: Outpost 37 in Pakistan.

Through “found footage” shooting, which grows tiresome at some moments, and brief testimonials peppered throughout, Alien Outpost aims to be an intimate exploration of the lives of the disregarded soldiers at Outpost 37 rather than a wide-scale epic of World War III. By emphasizing how these aliens affect the interpersonal relationships of these men, no matter what country they are from, an emotional link binds us viewers to them, creating a more meaningful narrative.

We can effectively attribute that success to Raisani and co-writer Blake Clifton for crafting a screenplay that doesn’t ignore its players but caters to them, and like any good war movie should, shows the complexities of brotherhood during wartime. Additionally, by strategically placing Outpost 37 in Pakistan, the writers manage to interweave the tumultuous politics of The Middle East that we see today with their completely fictional world. The result is a fascinating “what-if” scenario that still manages to somehow be plausible.

If you are wondering what exactly these particular aliens are like, you better believe Raisani has a few tricks up his sleeve. As the visual effects supervisor for, ahem, "Game of Thrones," the new director comes equipped with a vast set of tools to make these aliens unique and incredibly powerful. No scrawny, big eyed E.T.s here. Instead, these guys are big, mean, and nearly indestructible.

What may surprise some viewers is how the intense action is rather held back, and decisively so. Conserving the shoot-em-up moments allows for more tension to build and that unsettling feeling in your stomach to never quite cease, so when those big baddies do eventually come, wielding their super-galactic weapons, it is delightfully surprising and cathartic.

After watching and looking back on Alien Outpost, it suddenly becomes apparent that there are no real standout characters, but maybe that’s not such a bad thing. Like soldiers on the warfront, once the guns are drawn, everybody is just another man fighting for his life, and in this case, fighting for our planet. It’s hard to argue with that.

Enter to win an IFC Midnight DVD pack and a gift certificate to Meltdown Comics by clicking here!