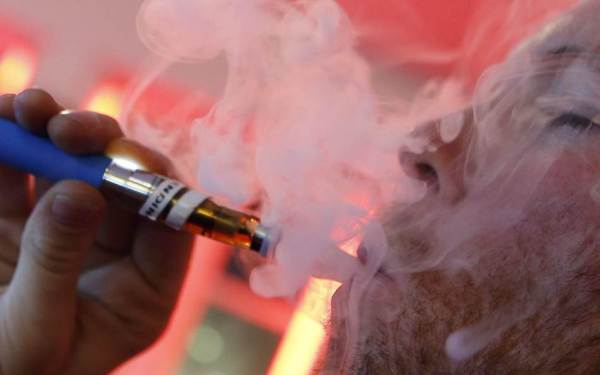 A preliminary study in the New England Journal of Medicine raises a new worry about electronic cigarettes — exposure to formaldehyde.

Under certain conditions, taking 10 puffs from an e-cigarette would expose a user to about 2.5 times as much formaldehyde as he or she would get from smoking a single tobacco cigarette, according to the study.

Formaldehyde is the pungent chemical that was used to preserve the frog you dissected in your high school biology class. It’s used as an industrial disinfectant and as an ingredient in permanent-press fabrics, plywood, glues and other household products, according to the National Cancer Institute. It is also formed when the propylene glycol and glycerol in e-cigarette liquids and oxygen are heated together.

The World Health Organization’s International Agency for Research on Cancer says formaldehyde can cause leukemia and nasopharyngeal cancer. The U.S. Environmental Protection Agency considers the chemical a “probable human carcinogen.”

In experiments at Portland State University, researchers used a tank system type of electronic cigarette to produce nicotine vapor. The e-liquid vapor was captured in a tube and analyzed using a technique called nuclear magnetic resonance spectroscopy. Each sample consisted of 10 puffs of vapor (at 3 to 4 seconds per puff) collected over 5 minutes.

Based on these results, the research team estimated that an e-cigarette user who vaped 3 milliliters of e-liquid per day would breathe in at least 14.4 milligrams of formaldehyde. The actual daily exposure is probably higher, they wrote, because their experiments failed to capture all of the vapor the e-cigarette produced.

For the sake of comparison, a 2005 study in the journal Regulatory Toxicology and Pharmacology estimated that a person who smoked a pack of 20 cigarettes would inhale 3 milligrams of formaldehyde in the process.

The researchers calculated that the lifetime cancer risk incurred by inhaling formaldehyde would be 5 to 15 times higher for long-term e-cigarette users than for long-term tobacco smokers.

Proponents of electronic cigarettes were quick to criticize the study for testing the devices under conditions that don’t reflect actual use. If a person were to take 4-second puffs on a high voltage setting, they would experience a “very harsh and awful taste,” Bill Godshall, an adviser to the Consumer Advocates for Smoke-free Alternatives Association, said in a statement distributed by the American Vaping Association.

Gregory Conley, the group’s president, added that e-cigarette users take shorter puffs as they increase the voltage on their devices. “These are not settings that real-life vapers actually use,” he said.

But study co-author James Pankow, a chemistry professor and expert on cigarette smoke dangers at Portland State University, said the line between e-cigarettes and tobacco cigarettes was growing fuzzier by the day.

“No one should assume e-cigarettes are safe,” he said in a statement. “For conventional cigarettes, once people become addicted, it takes numerous years of smoking to result in a high risk of lung cancer and other severe disease; it will probably take five to 10 years to start to see whether e-cigarettes are truly as safe as some people believe them to be.”