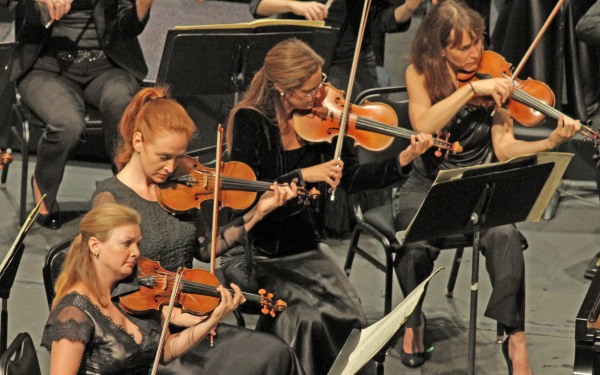 The Los Angeles Chamber Orchestra, considered one of America's finest chamber orchestras, will be the headline musical act for a romantic one-on-one date on an upcoming episode of "The Bachelor." The episode will feature a special Cinderella-inspired date where the Orchestra will serenade one lucky lady and the newest Bachelor, Chris Soules. This is the first time in the show’s 19-year history that an orchestra has been featured. The episode is scheduled to air Monday, January 26, 2015, at 8/7c on ABC.

Chris Soules, the handsome and successful new Bachelor who has become known as “Prince Farming,” introduced himself to last season’s Bachelorette Andi Dorfman, and female fans fell hard for the soft-spoken man with a heart of gold. Now, this dreamboat farmer and wealthy businessman from Iowa is looking to fall in love and find a wife — and bring her back home to share a life with him in the small Iowa town of Arlington. With the support of his family and the state of Iowa rooting for him, Chris truly believes he can find the right woman to share a life with. Follow Chris Soules’ search for his soul mate in the 19th edition of "The Bachelor" Mondays (8:00–10:01 p.m., ET) on the ABC Television Network.

LOS ANGELES CHAMBER ORCHESTRA (LACO), proclaimed “America's finest chamber orchestra” by Public Radio International and “resplendent” by the Los Angeles Times, has established itself among the world's top musical ensembles. Since 1997, LACO has performed under the baton of acclaimed conductor and pianist Jeffrey Kahane, hailed by critics as “visionary” and “a conductor of uncommon intellect, insight and musical integrity” with “undeniable charisma,” “effortless musicality and extraordinary communicative gifts.” Under Kahane’s leadership, the Orchestra maintains its status as a preeminent interpreter of historical masterworks and a champion of contemporary composers. During its 46-year history, the Orchestra has made 31 recordings, toured Europe, South America and Japan, performed across North America and garnered eight ASCAP Awards for Adventurous Programming.

To learn more about the Los Angeles Chamber Orchestra, go to laco.org.

On ABC’s hit primetime reality series The Bachelor, one lucky man is offered the chance to find true love. A single and eligible Bachelor embarks on a romantic journey, getting to know a number of beautiful women, gradually narrowing the field as he continues his search for his soul mate. At the end of this romantic voyage, if he has found the one, will there be a proposal — and will she say yes? Hosted by Chris Harrison, The Bachelor is produced by Next Entertainment in association with Warner Horizon Television.

The 19th season of The Bachelor airs Mondays 8/7c on ABC. For more information on The Bachelor, visit abc.go.com/shows/the-bachelor.