Measles cases not limited to the unvaccinated 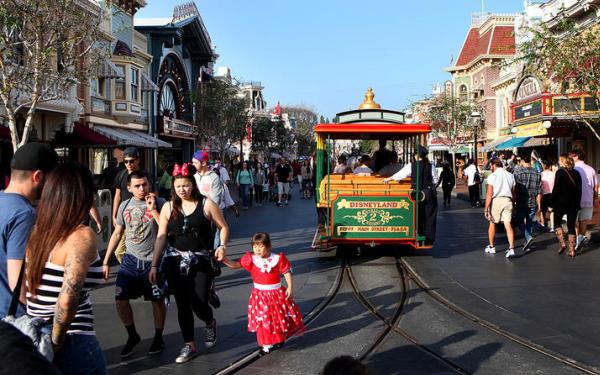 Disneyland hasn't been the happiest place on Earth, if you're susceptible to measles.
(Credit: Christina House / For the Los Angeles Times)

SANTA ANA, Calif.—As the measles outbreak that began at Disneyland grew to at least 70 cases Wednesday, much of the attention has focused on how the vast majority of patients were not vaccinated for the highly contagious disease.

But some medical experts have also expressed concern about the five patients who contracted measles despite being fully vaccinated.

Their cases point to a lesser-known aspect of the measles vaccine: That even those who get the shots have a small risk of getting sick, especially older people who were immunized in the 1960s, ’70s and ’80s.

Before 1989, federal guidelines recommended one dose of the measles vaccine. But after a major outbreak that began that year, leaving 55,000 sick and about 120 people dead nationwide, including 75 in California, officials called for a second dose.

Patients who get both doses are far better protected than those who only got one as a baby.

“I would say anybody who doesn’t know they’ve had two doses should get a dose of vaccine,” said Dr. James Cherry, a University of California, Los Angeles research professor and primary editor of the Textbook of Pediatric Infectious Diseases. Getting a third dose is also safe, he said.

California’s last measles outbreak started about a year ago, also centered in Orange County, and involved residents returning from the Philippines with the disease. In that case, 18 percent of those who got sick had been immunized, Cherry said.

In 2011, a New York City outbreak was traced to a fully vaccinated 22-year-old woman who not only got measles but spread it to four other people who also had immunity to the disease. This was the first time it had been documented that a fully immunized person could transmit measles to others, researchers said.

When asked about the case Wednesday, New York City health officials emphasized that it is rare for vaccinated people to get and then spread the disease.

The measles cases spread at Disneyland a week before Christmas. Experts have said the theme park was a perfect incubator because it attracts visitors from all over the world, such as places in Europe and Asia where measles is still a large problem.

Since then, the disease has continued to spread, mostly through people who were not vaccinated. Health officials have immunization records of 43 measles patients; 37 were unimmunized, one had only one shot, and five were fully immunized.

Of the 70 cases, 62 were in California, with the rest in Utah, Washington, Colorado, Oregon and Mexico. One in four of the California cases required hospitalization.

Dr. Gil Chavez, the state epidemiologist, implored Californians who have been fearful of the measles shot’s safety to reconsider and get the shot. Numerous medical studies have proved that the notion that vaccines cause autism is a myth unsupported by scientific evidence.

“Vaccination is safe and effective,” Chavez said. “With this outbreak in this state, we can expect to see many more cases of this vaccine-preventable disease unless people take precautionary measures.... We have a particular responsibility to protect all of our infants in the state until they are old enough to vaccinated.”

Measles is so widespread in California that health officials advised parents with newborns too young to be immunized to keep them away from places with large numbers of people, especially those attracting international travelers, such as Disneyland or international airports. Babies are scheduled to get their first measles shot at 12 to 15 months of age, but no earlier than 6 months of age.

Initially, health officials believe the measles spread at Disneyland only during a four-day period in December. But Chavez said Wednesday that employees and visitors infected with measles remained at the park into January.

The disease has spread beyond Disneyland, and people are contracting the disease across Orange County and beyond.

The only way past outbreaks have been quelled is through higher immunization rates.

“I think it is absolutely safe for you to go to Disneyland if you’re vaccinated,” Chavez said. But because newborns under 6 months of age cannot yet get the vaccine, “I would recommend that infants are not taken to places like Disneyland today.”

Disneyland officials reiterated the state’s message Wednesday, saying Disneyland is safe for inoculated visitors but those with unvaccinated children should be aware of risks.

All Disneyland employees who might have been in contact with the five infected park workers have been placed on paid leave if they are unvaccinated or if they could not confirm their immunity status, company officials said. Two of the five workers were vaccinated; officials are investigating the status of the other three, health officials said.

The outbreak has generated increased concern about the rise in the number of parents who do not immunize their children. Orange County is home to several upscale communities where a higher than average number of parents have opted to not fully vaccinate their children because of their personal beliefs. Experts say it’s a problem when 8 percent or more decline vaccines that keep diseases such as measles from spreading.

A Los Angeles Times analysis published last year found that 9.5 percent of kindergartners at Capistrano Unified in south Orange County in 2013 were exempted from vaccinations because of personal beliefs; the rate was 14.8 percent at Santa Monica-Malibu Unified. The rate statewide that year was 3.1 percent.

Health officials said they are much more concerned about those who are not immunized than about the cases of those who got sick despite being vaccinated.

“And so when you have a scenario where hundreds of people get exposed, then even if the vaccine is 99 percent good after two doses, you’re going to have a handful of people who are going to get sick.”