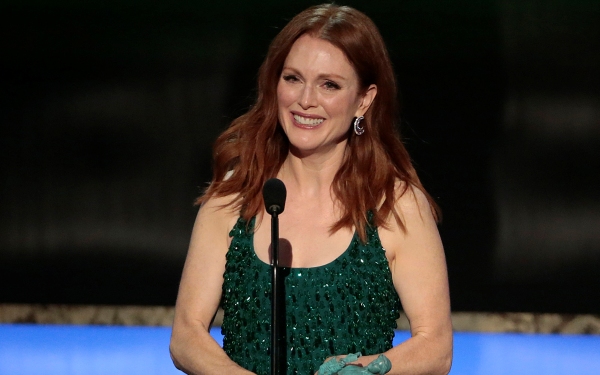 LOS ANGELES — “Birdman” soared this weekend, taking two top prizes, including the Screen Actors Guild Award on Sunday evening for ensemble, the guild’s equivalent of best film of the year.

The dark comedy starring Michael Keaton as a washed-up movie superhero seeking redemption has been picking up honors throughout the awards season, though has been overshadowed at times by critics darling “Boyhood.” But on Saturday night, it won the top prize at the Producers Guild Awards. That, combined with its win Sunday at the 21st Screen Actors Guild Awards, solidifies its position as a front-runner heading into the Academy Awards next month.

Redmayne dedicated the honor “to those who have lost their lives to this brutal disease.” As he prepared for the role, Redmayne said, “I met many people fighting ALS … the courage and the bravery and the spirit, the triumph of spirit that I witnessed, blew my mind.”

Earlier, Viola Davis won for female actor in a drama series for her role in “How to Get Away With Murder” and said the win was a victory for defying stereotypes. Davis praised the show’s creators and producers for casting a 49-year-old African-American woman “who looks like me” to play the role of a “sexualized, messy, mysterious” legal powerhouse in the freshman hit drama on ABC.

The star-studded audience gave a rousing standing ovation for Debbie Reynolds as she received the life achievement award.

Reynolds, 82, who got her first contract after she won Miss Burbank honors at age 16, has starred in such Hollywood classics as 1952’s “Singin’ in the Rain.” “I had a good time in that picture wearing myself out,” she said.

She rambled a bit during her acceptance speech, as her daughter Carrie Fisher stood by and held the award with a smile. Reynolds said her favorite role was “The Unsinkable Molly Brown,” which nabbed her an Oscar nomination. In that 1964 musical, about a feisty young woman, she sang, “I Ain’t Down Yet,” and it has served her since as a motto of sorts.

“Well, I ain’t,” she quipped with the crack comedic timing that had made her a star.

In other awards, Patricia Arquette and J.K. Simmons continued their winning ways and solidified their status as front-runners heading into the Academy Awards next month.

Aduba, who plays the eccentric inmate Crazy Eyes, accepted the ensemble award on behalf of the cast and was sincerely shocked at her own prize: “I really truly do not know what to say.”

The Netflix series and Aduba had topped such established performers and shows such as Julie Bowen for “Modern Family,” Edie Falco for “Nurse Jackie,” “The Big Bang Theory” and “Veep.”

Over the past two decades, the SAG Awards have predicted Oscar gold.

The SAG Awards aired live on TBS and TNT from the Shrine Exposition Hall in Los Angeles.