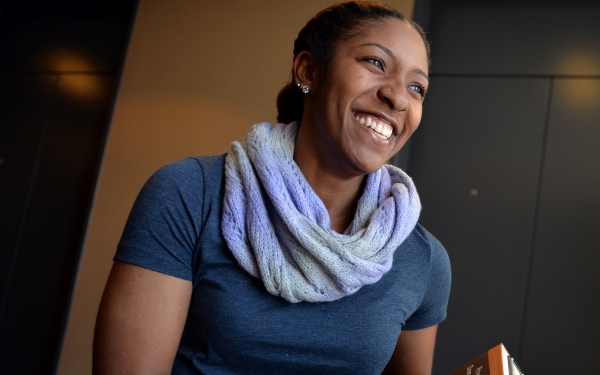 ATLANTA—When Aundrea Nattiel goes in for a session with her college adviser at Georgia State University, there are no secrets.

A detailed computer profile provides information about every class taken and every grade earned by Nattiel during her time at the school, as well as her academic history at the college she attended before transferring. If the junior sociology major withdraws from a class, forgets to take a prerequisite or doesn’t register for enough credit hours to keep her on track for graduation, her adviser receives an alert and summons Nattiel.

The high-level tracking and advising done by Georgia State is part of the university’s work to improve retention and graduation rates, prevent students from taking unnecessary classes, and ultimately lower college costs and student loan debt. Its progress has gained the school national attention. It was also one of the key factors in state college leaders deciding to merge the university with Georgia Perimeter College, which has struggled in these same areas.

Using 10 years of collected data, Georgia State has developed intervention initiatives, including a robust advising program, to help its students stay on track. The work — headed by Tim Renick, Georgia State’s vice president for enrollment services and student success, as well as vice provost — has become part of a national focus on improving college outcomes. Recent data on college students are discouraging. Most students are not graduating on time, according to a report from Complete College America, and loan debt has skyrocketed to more than $1 trillion, exceeding auto and credit card debts. In this area, Georgia State has received awards from academic associations, and President Barack Obama lauded the school in November during the White House’s college opportunity summit.

When Renick moved into the vice provost office six years ago, he realized there were deeper challenges for Georgia State’s students. The college has a nonwhite population of slightly more than 60 percent, and almost 60 percent of the college’s roughly 32,000 students receive federal needs-based Pell Grants, Renick said.

“We knew our approach had to be different because of our population,” he said.

In a recent piece in The New York Times, Renick noted that for students, particularly low-income students, there is a need to complete college expeditiously. If they run out of financial aid, “they’re dropping out and they’re dropping out with debt and no college degree,” he said. “We’re giving them at least a fighting chance.”

To better help students, Georgia State began using its collected historical data on grades and student outcomes to predict student performance in other classes. The data collection led to the use of a Web-based tracking system of more than 700 items that alerts advisers when students have gotten off track. Last year, the system found that 2,000 students had signed up for the wrong classes.

Having the kind of intensive advising that Georgia State does can be a bit disconcerting at first, but it is generally appreciated.

Nattiel, the sociology major, participated in required advisement at her previous state school in Georgia, but it was more about what classes were interesting to her, leaving a less-than-focused Nattiel taking classes she didn’t need.

“This is about what is going to be good for them, what will help them be successful,” said Lindsey Fifield, one of Georgia State’s roughly 70 advisers for students such as Nattiel. With about two years of school left, Nattiel has mapped out her class schedule with Fifield’s guidance through graduation.

To get these kinds of outcomes, Georgia State ramped up its advising staff, with each adviser responsible for about 300 students, down from almost 1,000 a couple of years ago.

Other colleges within the state are also working toward some form of advising and data analytics similar to Georgia State’s. The work is key to the state’s Complete College Georgia initiative, launched by Gov. Nathan Deal three years ago with the goal of increasing by 250,000 the number of college graduates in the state by 2020.

Georgia State’s intervention work has yielded tangible gains. Although state funding has declined and the number of economically disadvantaged students has increased, the college has seen a rise in its graduation rates for students who earned their degrees within six years, including those for minority students. Ten years ago, Georgia State’s graduation rate hovered around 32 percent. It increased to almost 54 percent last year, approaching the national six-year rate of 59 percent reported by the National Center for Education Statistics. The college also ranks among the highest in the nation in the number of bachelor’s degrees awarded to black students.

“The major successes have not been with programs aimed at certain demographics,” said Renick, who has set a graduation goal of 60 percent. “It’s an issue of the problems, not people.”