Behind bars, college is back in session in some prisons 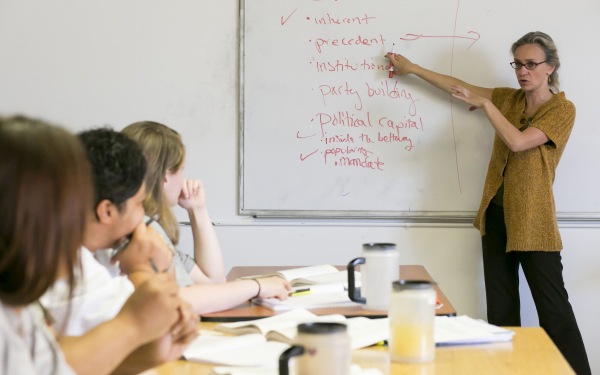 SEATTLE — Every week, they slide books through the metal detectors — novels by Virginia Woolf and Jane Austen, copies of the U.S. Constitution, texts on sociology, psychology and comparative religion.

Then dozens of professors and instructors from Washington state’s public and private colleges surrender their driver’s licenses and car keys to an armed guard, walk through the detector themselves and pass through a perimeter fence topped by coils of gleaming razor wire.

They have come to teach some of the state’s most unlikely college students: men and women serving time for felonies such as rape, robbery and murder.

Many think inmates don’t deserve the kind of higher education that law-abiding citizens must pay tens of thousands of dollars to get, a view that led lawmakers, as part of a get-tough-on-crime push in the 1990s, to bar federal and state money from supporting college classes in prison.

But now, such classes are starting to creep back, operating on shoestring budgets with private money, in the belief that they will more than pay for themselves by giving felons skills that can help them get jobs, reducing the recidivism rate.

Supporters point to a 2013 study by the nonprofit RAND Corp., which concluded that prisoners who participated in education programs were 43 percent less likely to return to prison within three years of release, and also found that every dollar spent on inmate education translated to $4 to $5 saved on re-incarceration.

The study couldn’t unravel whether college classes made the difference, because it looked at all levels of schooling, including GEDs and vocational education. But studies being done now are tackling that question.

In the meantime, participating academics believe they’re making a difference — for the inmates and society as a whole.

Teaching in prison “is the most fulfilling thing I’ve ever done,” said Reid Helford, a sociologist with a Ph.D. from Loyola University in Chicago, who teaches sociology to inmates at the Washington State Penitentiary in Walla Walla.

Education does more than offer inmates a credential, he added, saying it teaches them how to be the people we want our fellow citizens to be — thoughtful, critically aware of the world around them, disciplined and able to recognize authority.

One morning this fall, Robin Jacobson, an assistant professor of politics and government at the University of Puget Sound (UPS), stood before 16 inmates at the Washington Corrections Center for Women near Gig Harbor, lecturing about how a bill works its way through Congress.

The women, dressed in gray sweats with prison IDs clipped to their shirts, followed her closely — taking notes, frequently raising their hands to offer observations or ask questions.

Does the president need Senate consent to fire a Cabinet member?

What is the importance of presidential signing statements?

How could Jimmy Carter have won the 1976 election if popularity is an important component of political power?

Her course is offered through the privately funded Freedom Education Project of Puget Sound (FEPPS). Twelve professors from UPS, the University of Washington, Seattle Pacific University, Tacoma Community College and Harvard Extension School receive a stipend of $1,200 per semester to pay for transportation to and from the prison. UPS students serve as study hall tutors.

The women inmates themselves asked for the classes. They’d heard from former prisoners that vocational certificates didn’t always translate into jobs, and they wanted something more meaningful.

“The fundamental question is, what do we expect from our justice system?” asked Alyssa Knight, a student and inmate in her early 30s who expects to be released in 2025, 22 years after her conviction in the murder and attempted robbery of a suspected drug dealer.

“Do you expect it to rehabilitate a person?” asked Knight. “If you are just basically warehousing people, then you are not going to get a change.”

Tanya Erzen, executive director of FEPPS and an associate professor of religion at UPS, echoed a theme voiced by others who teach behind bars: Many inmates seem to value an education more fervently than the typical college student, for whom going to college was always a given.

According to a FEPPS survey, 78 percent of the women in the program have been victims of domestic violence. More than 40 percent are high school dropouts.

In the past two years, 250 women have taken courses through FEPPS. Currently, 37 women are working toward a college degree.

The program is so popular that it has a waiting list of about 50.

Before 1994, there were about 350 college prison programs nationwide, run by public colleges and universities. But then Congress eliminated federal student Pell Grant aid to prisoners, the source of money that had paid for college classes behind bars.

In 1995, Washington lawmakers followed suit with a ban on using tax money for postsecondary education in prison.

The same law expressly requires inmates to earn the equivalent of a high school diploma. Inmates are also encouraged to learn vocational skills through classes taught by the state’s community colleges. That carries an annual price tag of about $15.5 million, or about $939 for each of the state’s 16,500 inmates.

But academic college courses are off-limits, except for the privately funded programs that are offered in just four of the state’s prisons, and for the correspondence courses for inmates who can afford them.

College-level courses started creeping back into Washington prisons in 2005, when a private group, University Behind Bars, began offering them at the Monroe Correctional Complex. Then in 2008, an inmate at the Walla Walla prison wrote to business magnate Warren Buffett and implored him to fund classes in the state’s oldest prison.

The letter found its way to Warren Buffett’s sister Doris, who supported prison education in New York through her charity, the Sunshine Lady Foundation. Doris Buffett agreed to pay for a small program at Walla Walla and later extended it to Coyote Ridge Corrections Center near the Tri-Cities.

University Behind Bars has also expanded and now reaches nearly 200 inmates in two units of the Monroe Correctional Complex.

Paradoxically, for some, prison is a good place to go to college.

Behind bars, distractions are minimized and the structure of prison life makes it more likely that inmates will finish their educations, said Henry Richards, a Seattle forensic psychologist in private practice. Richards is the liaison between the Buffett foundation and the Walla Walla prison.

For many who ran afoul of the law, he said, going to school was like prison itself — “regimentation, boredom, the main emphasis is on control and being told you’ve failed.”

But while behind bars, he said, education becomes a way for inmates to control their futures.

Helford, the Walla Walla Community College adjunct who teaches both GED and college-level classes at the state penitentiary, said many inmates in his courses undergo a transformation.

When they first start his classes, “there’s something raw about them as students,” he said. “They really don’t know how to be a good student — how to behave in the classroom, how to present an argument, how to talk intelligently.”

They come in angry, he said, knowing everything. But after a few semesters, they change from “a somewhat immature kid” to “someone who has some poise, can speak intelligently, knows how to learn about something.”

Helford and Richards both acknowledge that the inmates who want college-level work may be the most academically capable men and women in the state prison system.

As such, they may be least likely to ever reoffend, no matter what kind of education they get in prison.

Still, two decades after funding for prison education was stripped away, “there is a deep understanding that college in prison was a good thing, and that it’s sorely missed,” said Vivian Nixon, executive director of the College & Community Fellowship, a New York-based nonprofit involved in prison education advocacy.

In the past, she said, inmates enrolled in college courses often mentored prisoners working on their high-school diplomas. “There was a better culture of learning — not just in education but in treatment programs for substance abuse, parenting programs, work training programs,” she said.

Over the years, some Washington legislators have tried to amend the law so some state money could be used for college-level classes. But strong opposition still exists. A 2013 bill, for example, would have allowed the Department of Corrections to carve money out of its budget to pay for prison education, but the bill died in committee.

In New York last year, Gov. Andrew Cuomo’s proposal to provide basic financing for college education programs in that state’s prisons also went nowhere. One lawmaker called it a “slap in the face” to hardworking New Yorkers struggling to send their kids to college.

Inmates who take college classes say that wrestling with big ideas stretches their intellectual muscles and relieves the monotony of prison life.

To do homework in their cells, they must turn off the TV and put away the playing cards.

When classes took off at the women’s prison, inmates put aside their complaints about prison life and began discussing English literature, or comparative religion, or American history.

“It pervaded our existence in here — it started to transform what people were thinking about,” said Knight, the inmate who is serving time for the murder of a drug dealer in Spokane.

Richards said a similar thing happened at the Walla Walla prison, as racial conflict and antagonism — hallmarks of prison life — were pushed to the background while inmates focused on their coursework.

The professors say they don’t dumb down the coursework for their prison classes. For most inmates, that’s meant having to step up their writing skills and take remedial math.

Marriam Oliver, an inmate at the women’s prison, has been locked up since she was 14 years old, after she and four other teens and an adult were convicted of killing an Everett man in 2001. One of her triumphs in prison was reading Virginia Woolf and then discussing the English novelist’s work with a college-going family member who came to visit.

“You see a lot of people coming back to prison, and a lot of that has to do with their education,” said Oliver, who is scheduled to be released in 2023. “And I refuse to be one of those people that didn’t take advantage of opportunities.”

A five-year study now under way will help determine if she is right.

The Pathways from Prison to Postsecondary Education Project, led by the nonprofit Vera Institute of Justice, is studying whether a college education in prison is a good investment.

Researchers hope to build on the earlier RAND study, which was unable to disentangle the effects of all the different types of education programs — basic remedial education, vocational training and college-level courses.

“This demonstration project is an important opportunity to get inside the ‘black box’ to really understand what program elements and dosage is associated with different outcomes,” said Lois Davis, one of the RAND report’s authors.

But advocates — and some inmates — are already convinced.

Tonya Wilson is working on her degree while serving two consecutive 10-year terms for two counts of second-degree murder in Washington. She believes that inmates who complete a college education may be better equipped to break the cycle of crime in their families that leads them to prison in the first place.

“Who would you rather live beside,” she asked, “a person that’s just getting out of prison who just sat in her cell and stewed, or do you want somebody who has transformed, who is educated, who will not be a drain on society?”