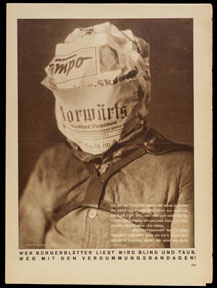 “I began making photomontage in the first World War. There are many things that brought me to work with photos. The main thing is that I saw in the newspapers what was being said and not said, both.”

If a picture is worth a 1,000 words, John Heartfield’s photomontages speak volumes. Commonly referred to as a pioneer and one of the most significant practitioners of the photomontage technique, Heartfield is credited with developing a “unique method of appropriating and reusing photographs to disclose the ‘truth’ obscured by fascist propaganda and the mainstream press.” Pieces of his politically charged works can be seen in this exciting exhibition.

Campus Circle offers you a preview of a few of these works that are now on view at the Getty. These selections express Heartfield’s “deep understanding of an image’s power, his ability to assemble visual statements that spoke louder than words, transformed photomontage from a vehicle of advertising and avant-garde art into a broadly significant mode of mass communication.”