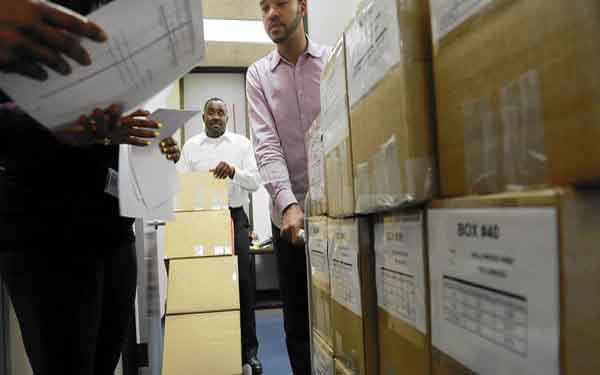 The bid to put a professional football stadium in Inglewood gained speed Monday as organizers filed more than twice as many signatures as they needed to put the project to a vote.

A group financed by Hollywood Park Land Co., which wants to build an 80,000-seat NFL-caliber stadium at the old racetrack on Century Boulevard, said they have submitted more than 20,000 signatures supporting zoning changes for the plan.

If Los Angeles County election officials verify 9,000 signatures, the measure could go up for a vote in Inglewood as soon as this summer.

Both the size and speed of the effort is a big show of support for the project, said Gerard McCallum, an executive with Hollywood Park, which is a partnership among St. Louis Rams owner Stan Kroenke, financiers Stockbridge Capital Group and San Francisco Bay Area-based developers Wilson Meany.

A group financed by Hollywood Park launched the petition drive just three weeks ago, hitting town hall meetings and civic events across the South Bay city, and got nearly 40% of Inglewood's registered voters to sign.

"The people of Inglewood are sending a clear and powerful message that this project is vital for our future," McCallum said.

Inglewood Mayor James Butts, a stadium supporter, echoed those sentiments and noted that, although the campaign had 180 days to gather signatures, it needed just 18.

"Here's what it says about the community's belief in the project and the desire for the project," he said. "That in overwhelming numbers in a short period of time they made a statement that is favorable toward it."

The measure itself would update the redevelopment plan for the 238-acre racetrack site, adding an additional 60 acres across the street from the Forum, beefing up office and retail space, and reducing the number of homes from about 3,000 to 2,500. The racetrack closed in late 2013 after 75 years in operation, and the Forum reopened the same year as a refurbished concert venue.

Hollywood Park and Inglewood officials have said that no public money would be spent upfront on the multibillion-dollar project — though $60 million in road and sewer costs would eventually be paid back to the developer through tax money — and they promise thousands of new jobs and more than $25 million a year in new tax revenue.

By proposing the changes through an initiative petition, instead of the city's normal planning process, developers would avoid a time-consuming, costly and potentially legally risky environmental review.

And if the stadium hopes to lure an NFL tenant — be it Kroenke's Rams or some other team — time is of the essence.

The NFL has said no teams would relocate in the offseason that begins after this Sunday's Super Bowl, but the window for franchises to apply to the league to move after the 2015 season is less than a year away.

Hollywood Park has said it aims to start work on the stadium by December, with or without a team, and doing so would probably bolster its chances of landing a franchise.

A team of St. Louis civic leaders is working on a $900-million stadium plan to replace the outdated Edward Jones Dome in a bid to keep the Rams. The Rams, as expected, said Monday that they're converting to a one-year lease.

St. Louis still needs to buy land and secure roughly $400 million in state financing. Other proposed stadiums in downtown Los Angeles and the City of Industry have local approvals but no team attached.