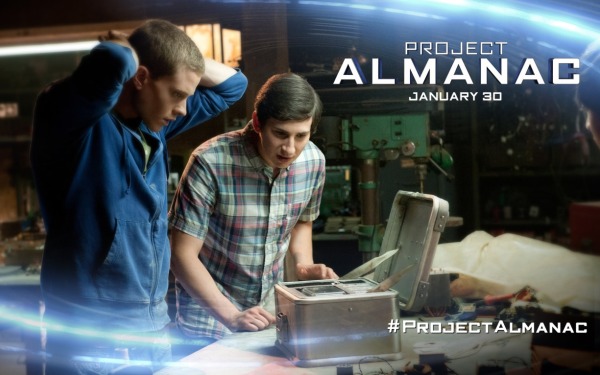 Have you ever wished you could go back in time to change one word, one sentence, or one look in hopes of changing your present? Daydreaming about what could’ve been can only get you so far, so why not be like David Raskin, and build your own time machine to get what you want?

Introducing Project Almanac, the latest foray into the complicated, yet wholly irresistible world of time travel. Just when you thought its all been done before, director Dean Israelite is here to remind you to not close the book on time travel just yet, for he’s got five rambunctious teenagers who are ready to stir up the pot.

It all starts when genius high schooler David Raskin (Jonny Weston, Chasing Mavericks), stumbles upon an old video camera containing footage of his seventh birthday. Nostalgia abound, David watches the footage with wonder, as it contains the last images of his father before his mysterious disappearance. That ends up being miniscule, however, when David sees a familiar face roaming around on the footage. It’s his own teenage face at his own seventh birthday party. So, when they happen upon an unfinished time machine in his father’s workshop, with schematics included, they don’t have to doubt how David managed to end up at his former self’s party, or if they can build this half-finished time machine, because as they’ve seen on that tape, they’ve already done it.

This is just the beginning of what can only be described as every teenager’s dream, where chances to get revenge on bullies, to become the most popular kid on campus, and get the girl of your dreams are all of the sudden a tangible reality.

For Israelite and his cast of misfits, it was how Project Almanac could make that reality something refreshing and unique amongst the sea of time-travelling films that they sought to explore.

Israelite explains, “What I thought we could do differently is not thinking what the time travel itself looks like, but rather thinking about what the effects of time travel look like. I knew that we weren’t going to be able to come up with some kind of wormhole vortex or lighting gag that was going to be any different than what we’ve seen before a million times… So, for me, once we came up with the idea… that it was going to be about how it affected our physical world, that opened us up into a new interesting sphere.”

Weston adds, “I think time travel is just a way of telling a story of relationships in this case. It’s certainly fun, but the movie has a deep theme to it, which is, I think, to live with the decisions you’ve made and trust yourself. I think that separates it from other films, because it’s not just about the fantasy or ‘what if.’ It’s trying to make a statement for people to examine themselves, which is the point of making a film to me.”

Without getting too tied up in the actual physics of time travel, Israelite concerned himself more with the relatable consequences that changing one’s past could provoke. While at first it’s all fun and games for the group of five best friends, spanning from winning the lottery to having a raucous time at Lollapalooza, the whiplash comes back threefold. For Jonny Weston’s character David, that consequence was obsession.

“I think with David Raskin it started out being for love, then it kind of became a compulsion for him, and he became addicted to time travel in a way. That’s what spiraled out of control,” Weston testifies. “Then it became about fixing it, when he keeps going back and back and back, and it keeps getting worse. By the end he had to make an ultimate radical decision.”

That love story he’s talking about was extremely important for the new director in crafting a high-concept story with a heartbeat—to be something more than just gimmick and flash. To Israelite, “it’s the way in which you are able to articulate Jonny’s coming of age. You as an audience member can track how he’s coming into himself based on how close he is to getting the girl.”

And what about that love interest? Sophia Black-D’Elia (Gossip Girl) stands opposite David as Jessie, a Helen of Troy of sorts. She may be the one who unintentionally urges our hero to go off the tracks with the whole time travelling business, but don’t think that doesn’t come with an emotional depth and core that a lot of our female characters are missing today, which is the main reason Black-D’Elia was so drawn to Jessie’s character in the first place.

Israelite and his passionate cast and crew prove that you don’t need a ready-made DeLorean to tell an effective tale about time travelling. All you need is a little heart, a few hormones, and a lot of kids with enough gumption to step inside a homemade time machine and throw caution to the wind. Like most of us in our high school years, Project Almanac will think about the consequences later.