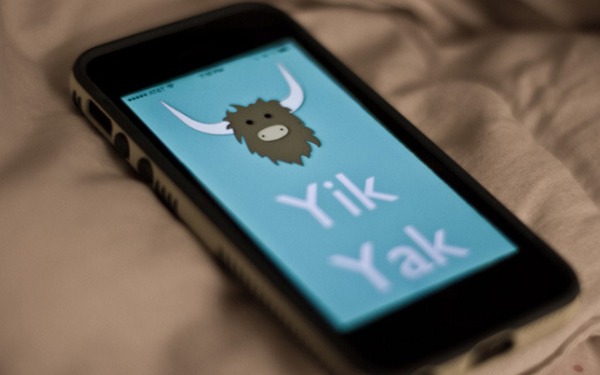 ORLANDO, Fla. — The musing was about running into the one person you didn’t want to see at the start of the new semester.

“Give a girl a fake number at the bar and now she’s in my class,” the comment said, followed by three frowny faces.

At the University of Central Florida and other schools, the social app Yik Yak is flooded with messages of anxieties and complaints, their observations and boasts about their X-rated shenanigans. It’s a spyglass into the life of a college student — like an anonymous Twitter feed for those inside a 10-mile radius.

At times, the popular app has been controversial and been banned at some high school and college campuses. In Sarasota, Fla., for instance, a high school choir field trip was cut short last year because of cyberbullying on Yik Yak.

Frazee said she wondered whether the posts — like someone calling out a pretty girl, for instance — were ever about her. If someone wrote about depression, she wished she knew who needed help.

Some UCF posts lamented about #collegeprobs: the parking (impossible), the textbook expenses (too much), Mexican food (just right.)

“Should of seen the look on everyone’s face when the prof. told us he has a 33% pass rate,” a person at UCF wrote. “Priceless.”

“When 2 textbooks cost as much as your rent,” wrote another UCF.

“(I don’t know) what’s more depressing to check; my GPA or my bank account,” wrote another.

Others wrote about love: of losing it, of believing in it or trying to find it at 3 a.m.

“Coming this spring, brought to you by the director of ‘The Notebook’ & ‘Dear John’ come: ‘My Crush in Three of My Classes Part 2: spring semester,’” one comment said.

When asked how she would describe Yik Yak to her grandmother, UCF student Stephanie Muñoz said simply, “I wouldn’t.”

There were random thoughts, too. About being thankful for squirrels or imagining a world where leaving the Brita water pitcher empty should fall under capital punishment.

“Three years in Gainesville, still haven’t invested in an umbrella, and still regret it every time it rains,” a University of Florida student wrote.

“Reading my roommate(‘s) diary and he wrote that I have boundary issues,” wrote someone at UCF.

Jackie Celentano, waiting for her math orientation to start, was about to check Yik Yak. She often checked it “before, during and after class,” too.

The night before, her three friends came over to her apartment, and they laughed at the comments like they were reading a gossip magazine.

“It will definitely put you in a good mood,” said Celentano, 20.

It was so addicting that Caroline Halik, 20, deleted it during finals week.

Not everything was lighthearted.

Some messages were the kind of questions that churned inside, that made your day seem dark even though you lived in sunny Florida. At least on Yik Yak, there was somebody to listen.

“My friend died yesterday. I really don’t know how to get through class today,” came a post from UCF.

“I’m so depressed for no reason, everything is just bleak and meaningless all of a sudden. What do I do?” wrote a person near Rollins College.

Within 17 hours, there were five replies.

“I know the feeling,” someone responded. “You just have to hold on.”

Try community service and get involved, one post suggested.

“Tomorrow will be better,” another wrote.