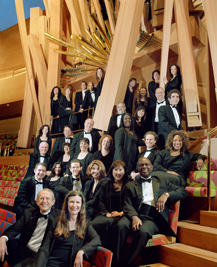 An overabundance of minimalism may seem oxymoronic. At some point, mid-festival, one would think previous concerts would aggregate to, at the very least, regular-size-malism. Thankfully (and logically) this is not the case.

Minimalism, a revolution staged against Modernism and Serialism (read: narrative) compositions, the style breaks down music to its basic elements – pulse, repetition, tonality, modality, commercialism – wherein a single note may be reiterated, literally ad nauseam (viz. Glass’ Einstein On The Beach), throughout the piece with gradual, subtle or no variation. Witness the genre’s deserved icon, Philip Glass, whose work has appeared in the Qatsi trilogy, Truman Show, The Hours and most of Errol Morris’ documentaries.

Commencing with the style’s current crop on March 19 (The Orb, Dntel, John Tejada and Boom Bip) Jukebox midpointed with the Los Angeles Master Chorale (Meredith Monk performed) and will make its way this weekend to the man for whom the term Minimalism was created – Glass. With more records in the jukebox than any other, Glass performs scenes from his opera Akhnatenon March 31, April 1 and April 2, and also participates in a Symposium and performance with fellow minimalists John Adams, Glenn Branca, Gloria Cheng and Robert Israel on the 1st.

The previous concerts are relegated to the Walt Disney Concert Hall; those preferring to get stuck in traffic on the 405 instead of the 101 can visit The Getty on March 31st where Minimalism’s other golden boy, Terry Riley, crescendos - or not – the full day Symposium, “Minimalist Jukebox: From Intonation to Collaboration.”

(As an antidote to all of this, check out the Maximalistic Matthew Barney in Drawing Restraint 9 (nee Cremaster 6) at UCLA on April 5.)

For the entire festival calendar and more information, visit http://wdch.laphil.com/minimalism/.
Article posted on 3/27/2006
This article has been viewed 2971 times.