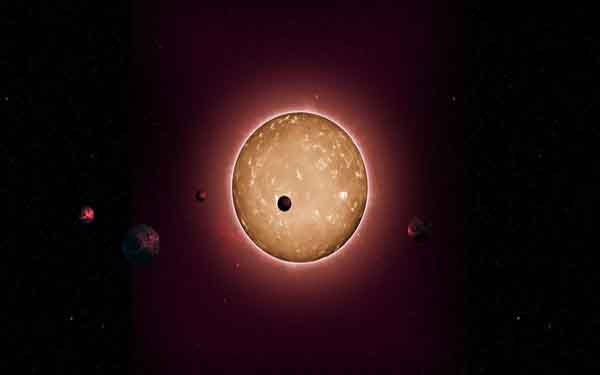 An artist's conception of Kepler-444 -- one of the oldest known planetary systems in the universe.
(Credit: Tiago Campante/Peter Devine)

Astronomers have spotted the oldest planetary system ever found, an ancient star and five small, Earth-like planets that are about 11.2 billion years old.

Until now, scientists weren’t certain that rocky planets could have formed so long ago, when the universe was five times younger than it is today. Now they know for sure that they did, according to a new study in the Astrophysical Journal.

The discovery also suggests that ancient life in our universe is more likely than was previously thought, scientists say.

“It hints that old system planets are possible,” said Sarbani Basu, an astronomy professor at Yale and an author of the paper. “And if those planets are in the habitable zone, then it is possible we could have old life too.”

The ancient star is known as Kepler-444. It is small and cool — just 75 percent as massive as our sun. It is situated 117 light-years from Earth, in the Milky Way Galaxy.

The planets that orbit it are smaller than Earth — somewhere between the size of Mercury and Venus. They move rapidly around their host star, making a complete orbit in less than 10 days. Because of their size, scientists say they are almost certainly rocky.

Up until three years ago, it wasn’t known if planets could form around such ancient stars. Kepler-444 formed in an early epoch of our universe, when elements heavier than hydrogen and helium were more scarce than they were when our sun was born 4.6 billion years ago.

Basu explained that the Big Bang created only hydrogen and helium and that all the other elements — what astronomers call “metals” — were forged in the inside of stars.

“Every generation the metal in the universe increases,” she said. “The fact that Kepler-444 is a low-metal star reinforces that it has to be an old one.”

Because heavy metals, like iron, are the building blocks of rocky planetary formation, scientists reasoned that planetary systems would be rare around old stars.

But that does not seem to be the case.

“This system doesn’t only harbor one planet, but five of them,” said Tiago Campante, a research fellow at the University of Birmingham in the United Kingdom and the lead author of the paper. “This system may then be not that rare.”

To understand the planetary system, the scientists first had to understand the star. To do that they relied on a large data set taken by NASA’s Kepler spacecraft that took images of the star once a minute for four years, noting tiny fluctuations in the star’s brightness.

This allowed them to detect each of the five planets, because the brightness of the star dimmed just a bit each time a planet moved in front of it.

The data also allowed scientists to study the natural resonance of the star using a technique called asteroseismology. By looking at the characteristic frequency at which it pulsates, asteroseismologists can derive the precise stellar mass, radius, density and age of a star.

In the case of this study, several different asteroseismology groups analyzed the Kepler data, and they all came to the same conclusion that the star was about 11.2 billion years old.

The five planets that orbit Kepler-444 are too close to their host star to harbor life as we know it, but the study opens up the possibility that an Earth-like planet, and possibly life, could have existed in the early universe.

“Kepler-444 came from the first generation of stars,” said Steve Kawaler, an Iowa State University professor and co-author of the paper, in a statement. “This system tells us that planets were forming around stars nearly 7 billion years before our own solar system.”