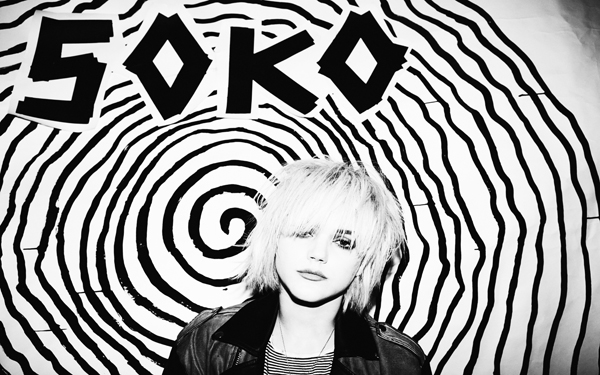 Girl meets boy. Girl falls in love. Boy is unfaithful, breaks girl’s heart. Girl locks herself in her room, filling her diary with doodles of broken hearts and sonnets of despair. She puts the words to music and a lovesick album is born. For Soko (Stéphanie Sokolinski’s musical moniker), this timeworn process—real life heartbreak birthing musical vision—represents her debut album, I Thought I was an Alien (2012). But her latest piece of work, My Dreams Dictate My Reality, shows a departure. This sentimental little girl has grown into a headstrong woman.

If her first album mirrored the tame acoustic pop of Cat Power and Neko Case, Soko’s latest release channels female icons of punk rock. Karen O of the Yeah Yeah Yeahs, Blondie and Patti Smith come to mind. My Dreams Dictate My Reality particularly resembles new wave/punk rock that came out of New York in the late ‘70s and early ’80s. In the title track, Soko sings over airy electronic fuzz evoking the dramatic timbre that soaked through the pop/punk of the ‘80s. It won’t come as a shock that Ross Robinson, longtime producer for The Cure, produced the album, coloring it with his characteristic electro ambience. “For Soko, it’s music or death,” said Robinson.

Sokolinski hails from a small town outside Bordeaux, France. At 16, self-assured and determined, she left her hometown to pursue acting in Paris. She has appeared in over a dozen French films including the leading role in Alice Winocour’s 2012 film Augustine. Soko’s portrayal of patient and muse to an acclaimed neurologist earned her the Best Actress award at Mar Del Plata International Film Festival. By age 20, Soko’s confidence continued. After witnessing a friend play music, she fathomed that she could play, too. Completely self-taught, she released her first album just a few years later. And with her second go, My Dreams Dictate My Reality, now complete, Soko proves that her intrepid nature and raw talent weren’t just a one-time thing.

Since I Thought I was an Alien, Soko has matured both musically and philosophically. “Who Wears the Pants,” shows a new side to Soko’s message. It’s her “first ever protest song,” she said. “I wrote it when I got fed up with all the crap I hear from homophobic demons.” It’s a rumbling punk track with lyrics condemning right-wing disapproval of the homosexual community. “Who put this idea in your head that you’re going to rot in hell?” she sings.

But with “Keaton’s Song,” the album’s final track, the old Soko returns. Just a girl, an acoustic guitar and her lamenting heart. Judging by the whispering lyrics and melancholy violin over the chorus, this “Keaton” guy must’ve really pierced Soko’s core. But can we blame him for being the inspiration for such delightfully haunting music?

My Dreams Dictate My Reality will be available March 3rd. Preorder the album here:  http://www.pledgemusic.com/projects/soko