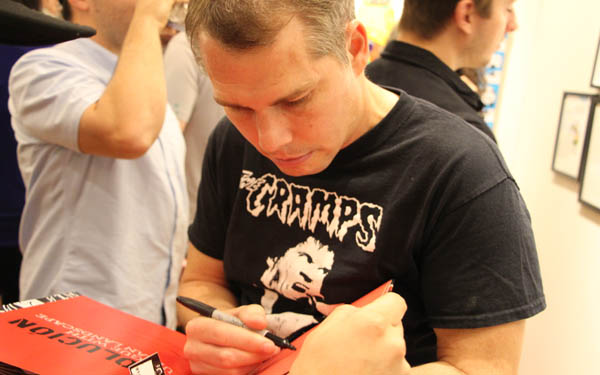 Long before commercial mega-stardom befell Tony Hawk, Ryan Sheckler and Shaun White, skateboarding was an anti-establishment, in-your-face orchestra of like-minded misfits. On and off the board, skaters challenged traditional society with their grungy dress and punk rock ethos—making grandmothers everywhere tsk tsk and clutch their purses. But today, with skateboards being sold at generic superstores like Target and Walmart, that counterculture image is slowly boardsliding into obscurity.

Shepard Fairey, street artist behind OBEY and the Obama “Hope” poster, has set out to carry on and celebrate the skate world’s fabled past through art. At his Sunset Blvd. gallery Subliminal Projects, Fairey has assembled a show of 13 artists demonstrating skate culture’s defiant history. The show, dubbed “Agents Provocateurs,” features cops dressed as swine, urinating temptresses and Jesus wearing army garb. Most of the work is printed on wooden skateboard decks. Rebellious—you get the idea. On Saturday, Jan. 24, skate world elite and art aficionados came out to peep the work, sip art show champagne (PBR) and groove to Mr. Fairey himself on the turntables.

“Skateboarding and its culture changed my life,” says Fairey in the show’s press release. “I grew up going to a conformist private prep school, and I had no therapeutic outlet to vent or focus my frustration until I discovered skateboarding.”

While Fairey found an outlet for healing on four wheels, artist Cleon Peterson discovered the same thing on a two by two foot canvas. Peterson’s “Judgment (White and Black)” depicts a battle between races. Black figures stab white ones; white ones grapple with black ones. It’s a meditation on the deep divide in society, our inability to view each other as human beings rather than tribes of varying color.

Chris Pontius, Jackass member and Steve-O’s costar on MTV’s Wildboyz, was in attendance, all smiles as usual. As was skateboarder and artist, Ed Templeton. Anaiah Lei, drummer for the up-and-coming LA-based band The Bots, hugged a back wall, eyes glued on a skate video streaming on a TV. And professional skateboarder Jerry Hsu crept in the corners, slugging beer and admiring the work.

Other featured works included a wall-dominating piece from Donny Miller’s universe series. The work shows a galactic scene covered by the words “Let it go.”

Surrounding Miller’s cosmic proverb is work by the Danish born artist FOS and SUPREME artist, Sean Cliver. The works by these two artists look tame at first glance but upon further review, something is just off—a portrait of a melting face by FOS; sultry vixen with false metal legs by Cliver. Like all the art in this show, the works stand up to established norms, proudly raising their middle finger in wayward revolt.

“The vibrant, fearless, culture of rebellion that is the distilled essence of skateboarding, and what drew me to it in the first place, is what ‘Agents Provocateurs’ is all about,” said Fairey. If you’ve ever ridden a plank with four wheels, listened to the Misfits or Public Enemy, but never to rent-a-cops, you need to be at this show!”

Open Tuesday by appointment only