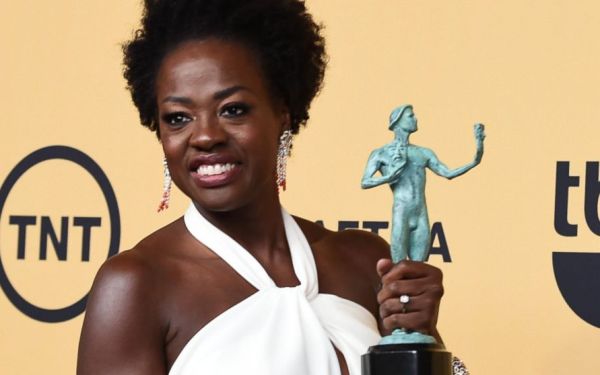 Viola Davis just won a SAG award for her role in How to Get Away with Murder.
(Credit: Jordan Strauss/Invision/AP photo)

Have women in television dramas earned the right to be strong, prickly, even — dare we say it — antiheroes?

The television landscape is filled with strong, competent female characters. They’re CIA agents, attorneys, doctors of all stripes, politicians. They advise presidents, sit as judges, solve crimes. They’re even mothers and wives, although generally, not “just” that.

If they are major characters in a drama, however, often they’re depicted as deeply flawed. Men can be antiheroes but the underlying layer of unpleasant behavior more often than not presents itself as arrogance. Weakness or vulnerability is rarely on display; that’s why Jack Bauer crying on Fox’s “24” was such a shocking display.

Women? They’re just the weaker sex. They can be imperfect but rarely bad in the way we’ve come to consider male antiheroes.

Added Weber, “If men are depicted as antiheroes, it’s still something the audience can rally ‘round. But if an artist, author or filmmaker creates women who are antiheroes, suddenly, they are misogynists and they’ve killed feminism.”

It’s not enough that Carrie Mathison (Claire Danes on Showtime’s “Homeland”) is the smartest spy in the room. She’s also a self-medicating, bipolar woman who became romantically involved with the subject of a terrorist investigation. On the short-lived ABC series, “Black Box,” Kelly Reilly was Catherine Black, a brilliant (is there any other kind?), bipolar neurosurgeon who liked to go off her meds.

Still, it’s fun to watch Viola Davis play law professor Annalise Keating on ABC’s “How to Get Away With Murder.” In accepting her Screen Actors Guild award on Sunday for actress in a television drama, Davis thanked “Murder’s” creative team for “thinking that a sexualized, messy, mysterious woman could be a 49-year-old, dark-skinned African-American woman who looks like me.”

Then there are policewoman Diane Kruger (Sonya Cross on FX’s two-season series “The Bridge”) and CIA analyst Katherine Heigl (Charleston Tucker on NBC’s current “State of Affairs”). Sonya had what appears to be Asperger’s syndrome; Charleston suffers from post-traumatic stress disorder after watching her fiance get killed in a raid in Afghanistan.

These two share a penchant for picking up strangers in bars to let off a little steam. Because, you know, that’s what strong male lead characters do in television dramas — rarely, anymore — unless writers want to depict them as outdated cads.

“It’s sort of the old trope that men are called ‘powerful’ and ‘risk-takers’ and women are called ‘bitches’ if they exhibit the same behavior,” said Allison Tolman, who played one of television’s shining examples of normalcy last year as Molly Solverson on FX’s stand-alone first season of “Fargo.”

“It’s a shorthand for ‘How does Hollywood imagine a certain kind of realness but also, potential drama,’ “ Weber said. “There seems to be a larger tendency now toward where you cannot be the hero of the show — if you’re a woman — and not carry with you some sort of major psychological burden or domestic challenge.”

This is not to say there aren’t any women depicted as strong, clever and mainstream. Despite some ridiculous romantic hang-ups over the president, Olivia Pope (played by Kerry Washington) on ABC’s “Scandal” is often in control of any situation. On CBS, “The Good Wife’s” Alicia Florrick (Julianna Margulies) and “Madam Secretary’s” Elizabeth McCord (Tea Leoni) are fairly realistic portrayals of women in power.

In a world filled with men: good, bad, greedy, scary, “Fargo’s” police officer Molly stood out from the crowd.

“She’s just so decent, isn’t she? It’s kind of refreshing,” said Tolman, who was the series’ breakout new star as well as an Emmy and Golden Globes nominee. She also was a true TV rarity: a larger woman wearing sensible footwear.

“Molly is not this crack detective. She’s not this idiot savant, or this ace, up-and-coming wunderkind. She has to learn how to be a detective.”

The flawed female drama lead isn’t a recent invention. In 2006, when the British miniseries “Prime Suspect: The Final Act” planned to kill off protagonist Jane Tennison (Helen Mirren), series creator Lynda La Plante told BBC television she was appalled the male writers instead made her a recovering alcoholic.

“I just find it sad that for the end of a great character, female, somebody had to say ‘Make her a drunk.’ “

What does it say that there are more strong, unencumbered women in the fantasy genre than anywhere else on television? When the human race was under siege, Laura Roslin (played by Mary McDonnell in Syfy’s “Battlestar Galactica”) was a complex character who stepped up to become president of the Twelve Colonies. Buffy Summers (Sarah Michelle Gellar on The WB/?CW series “Buffy the Vampire Slayer”) juggled school, teen angst, died twice, then lived to tell the tale. As her tombstone stated “She saved the world. A lot.”

Viewers need look no further than HBO’s “Game of Thrones” for powerful role models, of good moral character and bad. There’s Cersei Lannister (Lena Headey), a citizen of noble birth held back by the crime of being born female. Arya Stark and her sister, Sansa, are young refugees finally figuring out how to play the game.

“Mother of Dragons” Daenerys Targaryen and shy-but-deadly Brienne (Gwendoline Christie) constantly have to prove themselves in a man’s world.

But is television drama ready for widespread acceptance of female antiheroes? They’re not hard to find in comedy; Julia Louis-Dreyfus is widely acknowledged as brilliant, yet unlikable as soon-to-be President Selena Meyer on HBO’s “Veep.” Compare her to Robin Wright’s first lady character, Claire Underwood, on the Netflix drama, “House of Cards,” someone Weber calls “venal.”

In contrast, viewers hated Walt’s wife, Skyler. So vehement were they that Anna Gunn, who played her, wrote a 2013 personal opinion piece in The New York Times. “At the end of the day, she hasn’t been judged by the same set of standards as Walter,” Gunn wrote.

“People revered this man, they loved him so much, to the point where they hated his wife,” Tolman said of “Breaking Bad.” “She was holding him back from his illegal activities. So, it’s interesting that we can swing that far in one direction with male characters, and with female characters we have to be so cautious to carefully craft them.”