Prop. 47 brings a shift to longer time spent behind bars 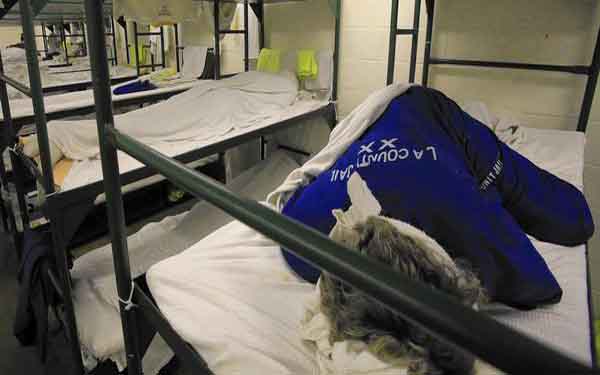 For decades, Los Angeles County jail inmates divided their sentences by five, 10 or 20 to calculate the time they would actually spend behind bars.

Because of overcrowding, they left after completing as little as 5% of their sentences.

Now, as Proposition 47 begins to reshape the California criminal justice system, they are serving much more of their time.

The new law, passed by voters Nov. 4, reduced drug possession and other minor crimes from felonies to misdemeanors. The county jail population plummeted and sheriff's officials began increasing the time served for the remaining inmates to 90% or more.

Most of the affected inmates will end up serving only half of that, due to automatic credits prescribed by state law, but the change is still profound.

Because of Proposition 47, others who would have landed in jail are not being arrested as street cops take a pass because of the low stakes. At the Los Angeles County Sheriff's Department, bookings are down by 23% and narcotics-related arrests are down 30%.

Other California counties are also seeing significant decreases in their jail populations as a result of the new law.

In Los Angeles County, the altered landscape has led to renewed questions about how big the new Men's Central Jail should be, as well as concerns about whether those now being issued misdemeanor citations are missing out on drug treatment that could turn their lives around.

Under the new law, the cost savings from smaller county jail populations, which the state legislative analyst estimated could be hundreds of millions of dollars, will be channeled into substance abuse and mental health programs, victim services and reducing school dropouts and truancy.

But some, including law enforcement officials, worry that people who need help will not enter the system. Already, fewer are opting for mandatory drug treatment programs because they face little to no jail time as an alternative.

"What concerns me is that some of those offenders were getting treatment," said Gardena Police Chief Ed Medrano, the Los Angeles County representative for the California Police Chiefs Assn., which lobbied against Proposition 47. "If they're getting arrested less, that doesn't mean their drug addiction problems have gone away."

Early release has been a near-constant feature in Los Angeles since 1988, when a federal judge allowed sentenced inmates to be let out early as a temporary solution to overcrowding.

Many inmates were freed after serving only 10% of their time. A 2006 Times investigation found that nearly 16,000 were rearrested for new offenses while they could have been finishing out their sentences. Sixteen were charged with murder.

In 2011, the county began accepting inmates from state prison after a new law shifted the burden to local jails. Roughly 6,000 inmates were added to the county jail rosters, with some serving lengthy state terms. To relieve the pressure on the jails and avoid overcrowding, sheriff's officials turned again to the early release of the remaining inmates sentenced to jail.

Over the years, the county has tried solutions including electronic monitoring, work programs and firefighting camps. But nothing had a dramatic impact until Proposition 47 passed with nearly 60% of the vote.

More than 400 county jail inmates have been released in the last three months because their crimes — which include theft and writing bad checks as well as drug possession — have been downgraded to misdemeanors under Proposition 47. That, combined with the reduced number of arrests, helped bring the jail population down to a low of about 15,000 from 18,600.

Since early release has been scaled back, the inmate count has rebounded to about 17,400.

About 3,000 inmates are serving the longer county sentences; most of those serving state sentences are not affected.

Dist. Atty. Jackie Lacey praised the news that serious offenders in Los Angeles County are now serving most of their terms, calling it "a positive and welcome effect" that could help her office strike better plea deals.

"Every defendant asks the following question: 'When can I get out?' " Lacey said. "If the 'when can I get out' is far in the future, it could impact if they plead guilty early or if they demand a trial."

Lacey emphasized that keeping a close eye on crime and recidivism rates will be key to understanding the full impact of the new law.

In Orange County, the inmate count has dropped nearly 22% since Proposition 47 took effect after the election, allowing sheriff's officials to close a section of the James A. Musick jail. Previously, there were no extra beds for new arrivals on the long weekends when court was not in session.

"Now, we've got the luxury of not waiting on pins and needles — now we have some space," said Lt. Jeff Hallock, a department spokesman.

San Diego County's inmate population has dropped nearly 16% to 4,874, said Cmdr. John Ingrassia, along with a 16% decrease in the number of inmates booked into the jails between October and December.

Although Proposition 47 is a major factor, Ingrassia said seasonal crime fluctuations also contributed to the change and Hallock pointed to the county's expansion of alternative sentencing programs.

In Riverside County, the jails were running at capacity before Proposition 47, and they still are, said Chief Deputy Scot Collins.

Supervisors at the Los Angeles County Sheriff's Department would like to see their arrest figures return to previous levels. They have instructed deputies to treat drug offenders the same as before — particularly because drugs are the driving force behind many other crimes.

"These offenses are still against the law, and we expect deputies to take the appropriate action when they encounter these offenses." Assistant Sheriff Michael Rothans said.

The changes in jail population are likely to reignite a debate on the county Board of Supervisors over the size of a replacement for the Men's Central Jail. The supervisors voted in May to move forward with a $2-billion plan that includes tearing down the dilapidated downtown jail and replacing it with a new two-tower, 4,860-bed facility geared largely toward inmates with mental health issues.

Given the population drop, Peter Eliasberg, legal director of the ACLU of Southern California, said he supports an overhaul of the jail system but believes that fewer beds are needed.

"We could have a temple to empty jail beds in L.A. if the county doesn't change course," he said.

Supervisors Hilda Solis and Sheila Kuehl, who joined the board after November's election, have expressed reservations about the size of the jail, as has Supervisor Mark Ridley-Thomas. On Tuesday, Kuehl said she was less concerned with how long inmates serve than whether they get the mental health and substance abuse treatment they might need.

"Early release never bothered me," she said, "because nobody had shown me that serving a full sentence would make people more fit to reenter society."