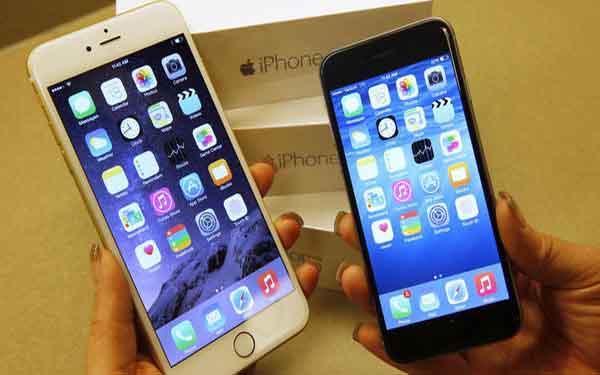 Apple Inc. sold nearly 74.5 million iPhones during the last three months of 2014 -- more than in all of its fiscal year 2011 -- powering a quarter of record profit that soared past Wall Street expectations.

Though Apple ramped up production of its bigger iPhone 6 and 6 Plus faster than any previous model, it couldn’t keep pace with demand until this month.

“We see that we’re appealing to new customers and people switching from Android,” Apple Chief Executive Tim Cook said on an earnings call Tuesday. “We’re very bullish on the product.”

Cook also announced that the Apple Watch would begin shipping in April. Analysts don’t expect the smartwatch to be a big moneymaker for Apple initially, but it could fill in where the iPad and iPod have fallen off.

Apple sold 18% fewer iPads from October through December compared to the same period in 2013. Sales figures for the iPod are no longer clear, folded into a new category that includes Apple TV and Beats Electronics products. The “other products” saw revenue decline 5% last quarter compared to the year-earlier period.

But the iPhone's stellar performance dominated Apple discussion on Tuesday.

Apple was expected to top its previous record quarterly sales of 51 million iPhones, set during the 2013 holiday quarter. But the company sold several million more than expected because of faster production and strong demand in emerging countries such as Brazil and China.

Cook said he doesn't expect demand to fall off significantly this quarter because there's no shortage of potential customers.

The percentage of people who have upgraded to the iPhone 6 is “in the teens,” Cook said. He also noted that the rate of people switching from Android smartphones to Apple is also the highest that the company has seen in at least three years.

“You can still buy this stock,” he said. “There’s more to come from this astounding profitability.”

Apple posted a profit for the October-December quarter of $18 billion, up almost 38% from a year earlier, as it recorded its highest operating margin in 10 quarters. Revenue came in at $74.6 billion, which included the first full quarter of iPhone 6 and 6 Plus sales. The Greater China region’s revenue contribution rose 70% year over year to $16.1 billion.

Some analysts maintain that Apple is a momentum stock that can’t possibly keep up the pace unless the Cupertino, Calif., company produces new blockbuster products. But most had expected a strong quarter. Shares of Apple rose more than 5%, above $115, in after-hours trading. During regular trading, the shares fell $3.97, or 3.5%, to $109.13.