Are video games good for you? New research suggests answer is yes 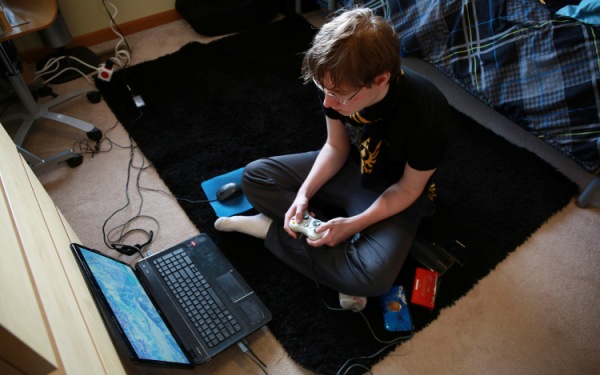 He grew up captivated by games from “Pokemon” to “Call of Duty,” and evaded his mom’s screen time limits by covertly playing his Game Boy after lights out. Now that he’s 21, he spends up to four hours a day battling enemies in the virtual arena of “Dota 2.”

Yet he was an honor student and a member of the debate team at suburban Downers Grove North High School, and today he’s studying economics at the University of Chicago. These accomplishments didn’t come in spite of gaming, Rivera said; in a way, gaming helped to make them possible.

“You pick up skills from whatever you do, and you can decide to aim those skills in an intellectual direction,” he said, crediting video games with broadening his interests and improving his mental dexterity. “They definitely enhanced the abilities I needed in life that weren’t always directly present. Without a doubt they have benefited me.”

Rivera’s belief echoes a new wave of research that has found surprising advantages in an activity that many dismiss as a waste of time, if not an outright menace. Social scientists have recently linked gaming with enhanced mental skills, moral sensitivity and even physical fitness, creating a new image of this ubiquitous but controversial pastime.

“We’re working really hard on understanding what aspects of gaming could be leveraged for the betterment of society,” said Daphne Bavelier, a cognitive neuroscientist who researches video games at the University of Geneva in Switzerland and the University of Rochester in New York. “Everyone understands it’s here to stay. It’s not going to disappear. You could try to ban it, but it seems to have really interesting positive effects.”

Researchers have done thousands of studies on gaming since the 1980s, often with unmistakably negative results. Some associated video games with an increased risk of epileptic seizures, while others cautioned that the games could provoke dangerously elevated heart rates. Many studies also linked violent games to aggression and anti-social behavior.

Ferguson said early research into any new technology is often flawed. Studies that aim to find negative effects get funded and promoted, while those with more benign findings are unpublished and forgotten, he said.

When a new generation of scholars more familiar with the technology comes along, different results often appear — and that’s what is happening with gaming, he said.

“We’re just not seeing the kind of data emerge that would support the techno-panic that was common in earlier years,” he said.

Ferguson has done dozens of studies on the subject and has consistently found that violent video games do not contribute to societal aggression. One recent project actually concluded that some children who play violent games are less likely than others to act like bullies.

“My speculation is that maybe kids turn to video games cathartically … or it could just be that they’re busy, so they don’t have time to bully other kids,” he said.

Another counterintuitive take on video game violence came from University of Buffalo communications professor Matthew Grizzard, who had research subjects play a first-person shooter game as either a United Nations soldier or a terrorist.

He found that those who took the role of bad guy often felt guilt over the virtual bloodshed they committed and exhibited greater moral sensitivity than those who played as soldiers.

“Video games are these important moral sandboxes,” he said. “They allow us to practice moral decision-making we can’t do in the real world. Games can be this really important tool for teaching people what the right decisions might be. Maybe one way to do that is showing what the consequences of wrong decisions would be.”

Gaming has long been identified as a factor in worsening child obesity, but research that scholar Chennan Liu performed at the University of Illinois at Urbana-Champaign suggests the pastime might have gotten a bad rap. Youth survey data she examined found that those who play video games for an average of three to six hours a day were healthier than those who played less.

Liu, now a professor of social work at Renmin University of China, said the unexpected result calls for further study. But she guessed that gaming might burn more calories than watching TV, or that kids gripping a controller are less inclined to pick up a snack or a soda.

That theory made sense to Dan Wojtowicz, 18, a student at Andrew High School in suburban Tinley Park, who spends up to seven hours a day on “Starcraft II,” “League of Legends” and other games.

“When I go on long gaming streaks, many times I don’t feel the need to eat as much, even though it takes a lot of my energy,” he said. “I can go without eating for three to four hours.”

The most intriguing studies might be coming from neuroscientists, who are using MRIs and other high-tech devices to learn how gaming affects the brain. Simone Kuhn, a researcher at the Max Planck Institute for Human Development in Berlin, has found that the prefrontal cortex actually grows thicker and gray matter more voluminous in people who play games as humble as “Super Mario 64,” changes that could improve memory and navigational ability.

Bavelier has focused on cognitive performance, finding that first-person shooters — one of the most reviled categories of video games — can help improve a person’s vision and ability to pay attention.

How that might translate into real-world benefits is still unclear, but Bavelier noted that young gamers have been shown to make superior laparoscopic surgeons, performing faster and making fewer errors than more experienced peers.

“One thing about this work, you need to leave at the door what you think this technology is doing and study it in earnest,” she said. “It’s not the case that we can get a sense of its impact intuitively.”

Not everyone is sold on the positive findings coming from recent gaming research. Joseph Bisoglio, who has studied the subject at Columbia University Medical Center in New York, said “the hype has outpaced the data.”

One big problem, he said, is that studies generally don’t compare gaming with other activities that stimulate the brain, such as learning to speak another language or practicing a musical instrument. So while gaming might improve cognitive performance in some ways, he said, other activities could produce even more profound effects.

“I’m just generally cautious, especially when something can very easily be marketed,” he said. “Video games already make a lot of money, and to say they’re therapeutic before the evidence is there, that really concerns me.”

Doug Bakshis was dubious of the value of video games when his son Noah began to shut himself in his room to play the likes of “Minecraft” and “Fallout: New Vegas” for hours at a time. But then Noah, who has Asperger’s syndrome, started to show a more open personality.

“The games have had a very calming effect on him,” Bakshis said. “In the gaming world, he’s in control of the environment, where he’s not in the real world. He’s gotten much more focused, and when things have happened in the real world, he’s been more able to deal with it.”

Noah Bakshis, now a 15-year-old freshman at Downers Grove North High School, said gaming has expanded his interests, prompting him to study archery and Japanese culture after first encountering the topics virtually. His attention, focus and coordination have also improved, he said, as has his self-awareness.

“(Games) helped me discover what my inner ethics are, what choices I would make in particular situations,” he said. “What I’ve found is I generally try to resolve things peacefully. … You can grow emotional attachment to the characters, and that’s not a bad thing. It proves they can give humanization to a bunch of polygons.”