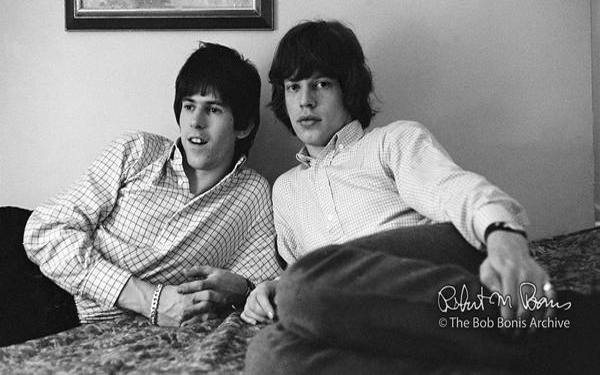 A shirtless Mick Jagger, relaxing poolside in Clearwater, Fla., in 1965, intently studies the back cover of Bob Dylan’s then-new “Bringing It All Back Home” album, still in the shrink wrap.

John Lennon, Paul McCartney and Ringo Starr gaze with delight as George Harrison tosses a yellow balloon into the air as the Beatles cavort in 1964 on the patio of a private Bel-Air mansion.

These are images from a trove of 3,500 previously unpublished photos of the Beatles and the Rolling Stones shot from 1964 to 1966 by their road manager, Bob Bonis.

More than 200 are set to surface in a series of limited-edition prints to be sold over eBay starting Feb. 2, making most of them accessible to the Beatles and Stones fans for the first time. The first batch going up for sale Feb. 2 includes 30 images — 15 of the Beatles, 15 of the Rolling Stones.

Various photos capture the Stones recording at the fabled Chess Records studio in Chicago in June 1964, shortly after their first U.S. concert stop in San Bernardino; Jagger doing his best James Brown dance moves during the band’s performance in Santa Monica for “The T.A.M.I. Show,” and the Beatles’ 1965 tour stop in Bloomington, Minn., the only show for which press photographers were not allowed in because of security issues.

In one shot from the Beatles’ 1965 performance of “I’m Down” in Portland, Ore., Lennon, wearing the signature Shea Stadium jacket and fisherman’s cap, jabs an electric piano keyboard with his right elbow, like his hero Jerry Lee Lewis, as other members of the Fab Four look on.

The images are from the Bob Bonis Archive, a collection Bonis started amassing during his stint as the Rolling Stones tour manager on their first visit to the U.S. in 1964, which in turn led the Beatles to hire him for their forays to the States.

Bonis kept the images private for his entire life. After his death in 1992, they sat in a family basement until about five years ago, when son Alex Bonis decided to let them see the light of day.

“They are amazing photos,” said Wayne Johnson, co-owner of Rockaway Records in Los Angeles, which specializes in Beatles collectibles and memorabilia. “They are really cool shots that most people have never seen, and they should do well with the right marketing and publicity.”

Alex Bonis has partnered with investors who plan to roll out the photos at the rate of 10 per month over the next two years. They’ll be sold through eBay’s art and collectibles store, which through the online auction and sales site’s Giving Works charity arm will earmark 10% of proceeds from the first batch of 30 images to benefit the Grammy Foundation and the Grammy Museum.

The photos will be offered as limited-edition, signed and numbered chromogenic prints that each will carry a certificate of authenticity from the Grammy Museum. They are being created in unframed editions of 250 for 11-by-14-inch prints priced starting at $175, plus 50 16-by-20-inch prints starting at $385 and 50 more 20-by-24 inch prints to be sold starting at $625.

“We wanted to open the field for people to have the opportunity to own rare, limited-edition art,” said Kurt Benjamin, a hedge-fund investor who is managing partner of the Bonis photo archive. “We wanted to create an environment that made it cost effective.”

He said once the editions of each image are sold out, those negatives will never be printed again.

“You have to see how unguarded and intimate they are,” he said. “They’re very, very unique and unlike anything I’ve ever seen before.”

Each quarter, Benjamin said the archive will stage a special event pegged to the release of the next round of 30 images, to be parsed out 10 per month. They’ll be sold first come, first served at fixed prices rather than being auctioned to the highest bidders.

Although eBay is largely known as a neutral forum that acts as a conduit between buyers and sellers of all kinds of merchandise, the offering of the Bonis archive images is part of a ramping up of the company’s growing art and collectibles division.

“We’ve really been dialing up our focus on art and collectibles over the past year,” said Gene Cook, eBay’s general manager for what it calls “emerging verticals.” That taps into eBay’s base of 155 million active users and 36 million who specifically trade in art and collectibles, Cook said.

“eBay thinks of itself as uniquely positioned and uniquely equipped to service customers with special kinds of items not because they need them — I always say we’re not in the business of selling soap — but things that strike a chord with them, that have lasting emotional value,” Cook added. “We have the opportunity to engage with people who are buying and selling things that really add value to their lives.”

The Beatles and Stones photos also capture an era in pop culture likely to appeal to baby boomers as well as younger music fans who are reaching back in their appreciation for bands that shaped music well before they were born.

Some shots have been exhibited in art galleries since the Bonis family pulled them out of storage, and a few were exhibited last year at the Hollywood Bowl at a concert marking the 50th anniversary of the Beatles’ first performance there in 1964.

What’s previous been available to the public constitutes about 6% of the total contents of the archive, Benjamin said, adding that, “About 4,700 of the photos have never before been seen or published.”

The full Bonis Archive encompasses nearly 5,000 images, about 3,500 of which are of the Beatles (800) and the Stones (2,700). The remainder are shots of other groups he photographed subsequently, among them shots of Simon & Garfunkel, the Lovin’ Spoonful, Cream and the Hollies as well as Frank Sinatra, Buddy Rich and other jazz musicians.

Time will tell whether the limited-edition Beatles and Stones prints will constitute a lucrative financial investment. One veteran dealer in rock collectibles said that few limited-edition photographic prints of rock and pop stars end up fetching higher prices on resale than what they sold for originally.

“Some people charge really silly prices just because they call it a limited edition,” the dealer said. “I have never done well with photos. But if they’re priced reasonably, they have potential.”

On that issue, eBay’s Cook said that when Benjamin approached eBay as a potential partner in the sale, “What was important to him was democratizing access to these images. This was very important to everybody.”

So is the allocation of some proceeds to charitable causes.

“We are teaming up with Giving Works, the charitable component and platform of eBay,” Benjamin said. “We’ll be supporting not only the Grammy Foundation and the Grammy Museum but other philanthropic causes as we go.”