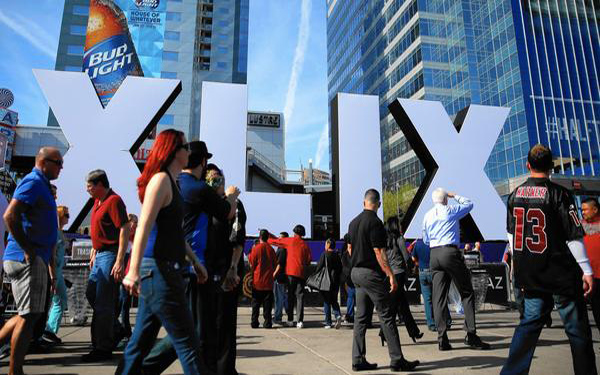 The Comcast Corp.-owned television network said Wednesday that it has sold all the available commercial spots for Sunday's NFL championship, establishing a new revenue record for what is traditionally TV's biggest event of the year.

NBC did not disclose how much it expects to generate, although executives said each 30-second spot sold for an average of $4.5 million. That could help NBC generate more than $360 million from the event.

"This is a record day, I believe, in media, and certainly for our company," Seth Winter, executive vice president of NBC's ad sales for news and sports, said during a conference call with reporters. "The NFL and the Super Bowl remain the platinum standard of all media."

This weekend's game pits last year's Super Bowl winner Seattle Seahawks against the New England Patriots, a team dogged by speculation that it deflated footballs to gain an unfair advantage in the AFC championship game. That controversy is not expected to dampen enthusiasm for the big game, with NBC predicting that an average of 115 million people in the U.S. will tune in.

Last year, Fox's broadcast of the Super Bowl brought in $332 million in ad revenue, according to an analysis by ad firm Kantar Media. Then, 30-second Super Bowl spots fetched an average of $4.2 million. More than 70 advertisers will be featured in Sunday's game.

Winter did not say how many sponsors bought multiple TV spots or longer-form ads — such as 60-second or 90-second spots. The trend in recent years has been for extended commercials as advertisers seek to make a bigger statement to stand out in the crowded field. Last year, about 40% of the commercials were 60-second spots.

NBC has been selling its Super Bowl ad time since early last year and finalized the game day roster in the last week. Once again, the lineup is expected to include beverage companies Anheuser-Busch, Coca-Cola and Pepsi, and car companies Nissan and Toyota. There are several first-time marketers, including Carnival cruise lines, Jublia antifungal cream and Mophie, a Tustin company that makes battery packs for mobile devices.

Mophie's spot will be its first on TV.

"In a certain way, there is no more effective buy than a Super Bowl commercial — if your spot catches fire," said Mike Sheldon, chief executive of ad agency Deutsch North America, which created the Mophie ad. "It is a large out-of-pocket cost but it can be small if you consider the vast amount of expose that you can get. But the commercial has to work."

In year's past, networks often would head into Super Bowl weekend with an extra spot or two after some advertisers that had committed to buy time pulled out when the production of their commercials fell short of expectations. This year, there were a couple of wobblers — Winter declined to name them — but those issues were sorted out in the last week.

As Super Bowl commercial prices continue to escalate, networks have been squeezing in more ads in order to make more money.

The last five Super Bowls have been "the most ad-saturated in history," Kantar Media said in a recent report, noting that each game was jammed with more than 45 minutes of commercials, including network and NFL promotions. Last year, there were 83 commercials.

NBC also sold all of its available space for its online video stream of the game, which it is making available free to users who want to watch on a tablet, phone or computer. Eighteen advertisers will run ads in the digital stream, which has a limited inventory for commercial spots.

"I wish we had twice the amount of inventory there, because we could have monetized it," Winter said.

The network is also making history by running a Spanish-language telecast of the NFL championship on its newly rebranded NBC Universo cable channel.

The postgame TV show on the main NBC network also has been sold out, and there are only a handful of spots available in the pregame show, which begins six hours before the game kicks off at University of Phoenix Stadium in Arizona.

A key reason that NBC was able to raise prices is because advertisers experience a Super Bowl "bounce." Their commercials are showcased on a variety of online sites such as YouTube and Hulu. People get involved by voting for their favorite ads and sharing videos on social media platforms, including Facebook, Instagram and Twitter.

According to a recent analysis by the firm iSpot.tv, Super Bowl commercials that ran last year accounted for nearly 10% of all digital conversations about advertising in 2014. And Super Bowl ads made up about less than 1% of the 95,660 national TV ads that ran in 2014.

"Everyone recognizes the value of Super Bowl, and price was never an issue," Winter said.